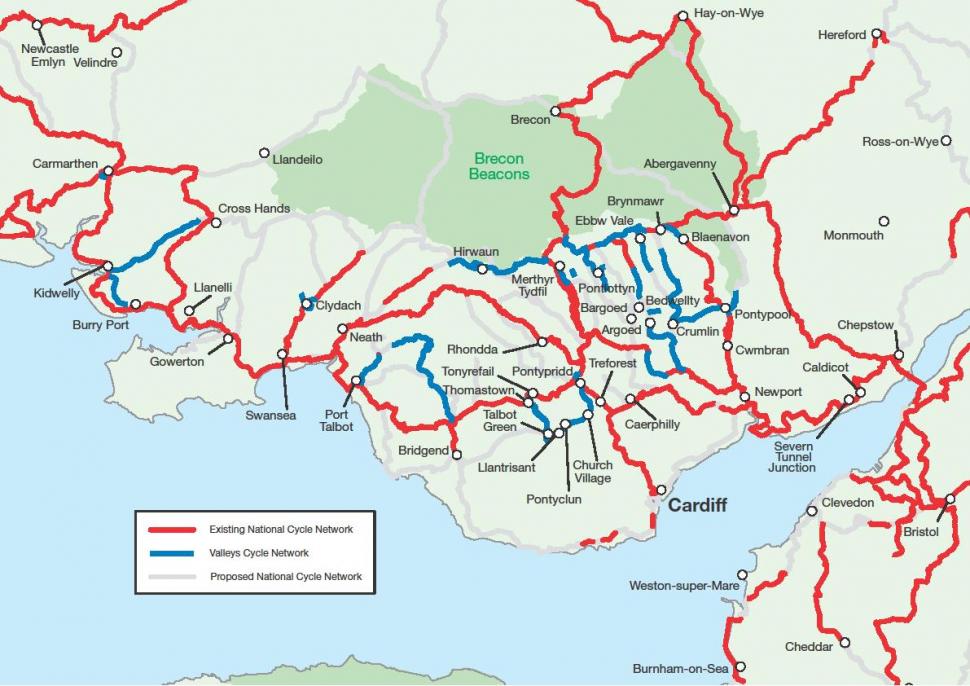 A new £7.6million investment will complete a £16million cycling and walking network in the South Wales Valleys, the Welsh Assembly's Minister for the Economy and Transport, Ieuan Wyn Jones, announced today. The money will fund 100 miles of new walking and cycling routes as part of the Valleys Cycle Network.

This will enhance more than 250 miles (410km) of existing routes in the Valleys, bringing the National Cycle Network to within two miles of a further 636,000 people.

The network of routes will follow former tramways, towpaths and railways in the South Wales Valleys - legacies of its industrial past.

With improved walking and cycling opportunities available to people across Merthyr Tydfil, Pontypridd, Llantrisant and Pontypool, it is hoped the scheme will provide an attractive alternative to car journeys, cutting congestion, reducing carbon emissions and helping people to travel in ways that benefit their health.

The new network will also link existing routes in the Swansea, Llynfi, Taff, Ely and Ebbw Valleys, improving access to towns and employment opportunities, as well as shops and visitor attractions. An arts programme will see the development of public artworks along the new routes.

Led by the sustainable transport charity Sustrans, the three-year project will receive £3.5 million from the Convergence European Regional Development Fund and £3 million from the Welsh Assembly, as well as support from the Big Lottery Fund.

Mr Jones said: “We are committed to providing more cycling and walking routes throughout Wales, helping people to reduce car journeys and provide them with healthy and cost effective access to employment and training opportunities.

“This project will bring immense benefits to the health and well-being of people in the South Wales Valleys, and to the environment of the area by reducing emissions caused by car use. It will form part of a wider scheme which will encourage more route users across the whole of Wales.

”As demonstrated in our National Transport Plan, we are more committed than ever before to providing more safe cycling and walking routes throughout Wales and will continue to work in partnership with Sustrans to do so.”

There are currently 1,300 miles of National Cycle Network across Wales, with 255 miles already existing within the Valleys. The extra 100 miles created as part of the Valleys Cycle Network will stretch from the mountainous landscape of Abergavenny in the east to the spectacular Carmarthenshire coast in the west.

Lee Waters, Sustrans Cymru Director, said: “These new routes will make it easier for the people of the valleys to get around their communities and to work on foot or by bike, and will also form part of a larger network that will attract tourists from across the country.”