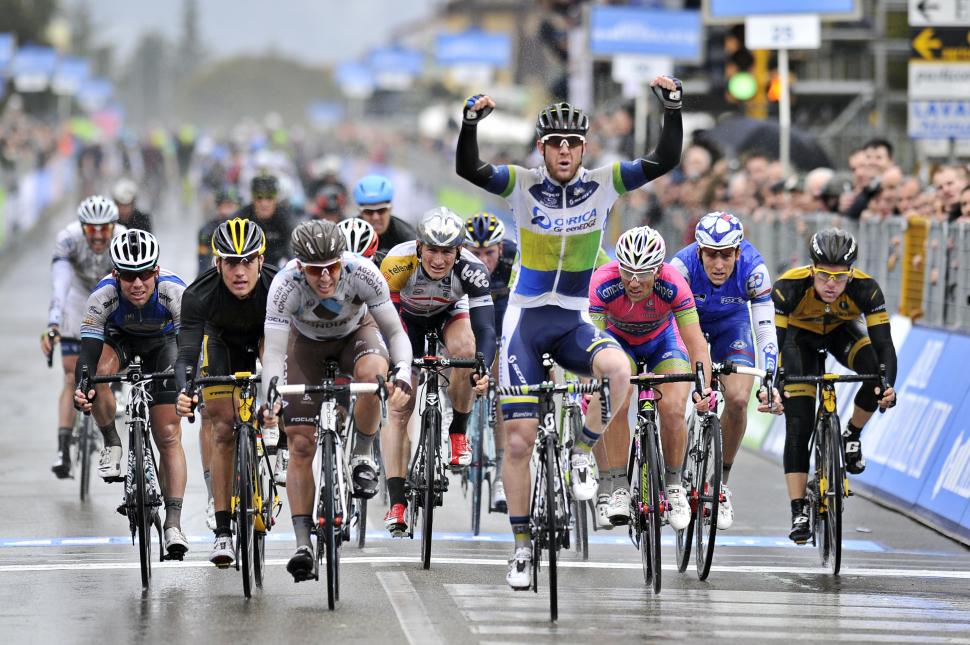 Mark Cavendish finishes fifth and keeps leader's jersey, but he's not happy with his team mates.....
by Simon_MacMichael

Matt Goss of Orica-GreenEdge has taken the Australian's team second WorldTour victory of the afternoon, winning a tough sprint in Indicatore that followed a scrappy finale in which the peloton became very strung out with a number of fancied riders missing the chance to compete for the win. Manuel Belleti of AG2R-La Mondiale was second, with MTN-Qhubeka's Gerald Ciolek third. Mark Cavendish finished fifth and keeps the race lead after picking up bonus seconds at an internediate sprint, but afterwards was critical of his leadout.

The Omega Pharma-Quick Step rider, winner of the stage of last year's race that finished here, was one of a number of fancied riders who saw their plans to fully contest the sprint scuppered in a disorganised finale on roads soaked from a heavy downpour. Cavendish recovered well to claim fifth place, but any chance of challenging for the win ended as he had to hit the brakes inside the closing 100 metres as he sought a way through on the right.

Afterwards, Cavendish, who typically expresses the feeling he has let his team mates down when things haven't worked out in a sprint finish, was uncharacteristically hard on them. "I'm quite disappointed with my leadout today, it's not often I say that, but we'll have to have words," he said.

Heavy rain made for a long day in the saddle for the 232 kilometre stage from San Vicenzo, and while today may not have resulted in the much anticipated first battle of the season between Cavendish and Lotto-Belisol's Andre Greipel, there's another expected opportunity for them to go head to head on tomorrow's Stage 3 in Narni Scalo.