Aero road bikes have been all the rage in recent years and this is Ridley's take on it, the Noah Fast. And fast it most definitely looks. And we should mention it's the choice of Lotto-Belisol's fast men, including of course top sprinter André Greipel, now we've got one to play with too.

Aerodynamics is one of the hott topics in racing bicycle design right now. For the last few years, and starting with Cervelo everyone's been taking designs and technology and above all tube shapes derived for time trial bikes and and applying them, suitably tweaked to road bikes creating a new category of bike, the ‘aero road bike’.

The Noah Fast frame has four key themes; aero shaped tubes, integrated brakes, slotted forks and stays, and F-Surface. We’ll start with F-Surface because we can’t think of any other road frame that has this - Ridley have been using it on their Dean time trial bike for a couple of years now. Applied to the leading edges of the head tube, seat tube and seat mast, is a 5mm-wide raised strip that is designed to delay flow separation and keep the air attached for as long as possible. 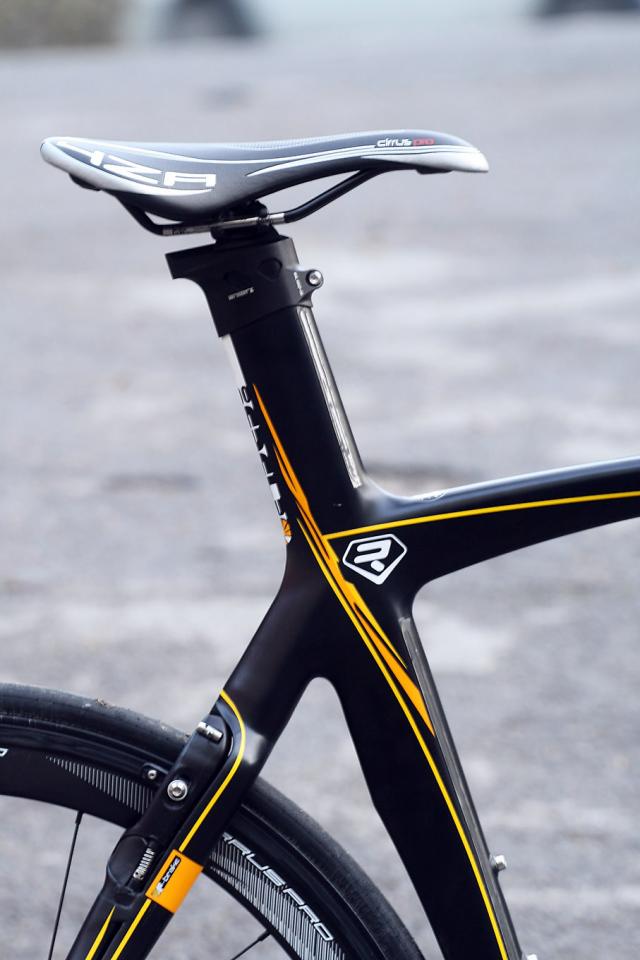 In aerodynamic fields it’s called a turbulator. When air passes over the frame, the layer of air closest to the surface is the boundary layer. Near the leading edge of the tube this boundary layer will be laminar, but in its journey across the tube the air becomes turbulent and will eventually separate from the surface. This separation point causes drag, because of the lower pressure behind this point. These strips move the separation point further along the tube profile closer to the trailing edge, by forcing the boundary layer to be turbulent (rather than smooth laminar) which has the effect of delaying the point of separation. It’s used successfully on aeroplanes, How it will work on a bicycle remains to be seen, aeroplanes do go a lot faster than bicycles even fast ones on a flying lap. Certainly the theory is sound and Ridley believe in it enough to have persisted with the system. We're guessing this is going to be another one of those aggregated marginal gains that you don't actually notice - either way, we're looking forward to finding out. I'm fairly confident that whatever else it does it isn't going to make me slower.

We’re seeing integrated brakes a lot more these days, the idea is a simple one, to move the brakes out of the airflow. Ridley have actually designed the mini V-brakes as part of the carbon structure of the forks and seat stays. There’s no pivot, instead they rely on flex in the carbon fibre to allow enough movement for the pads to contact the rims. They can be easily adjusted, with small springs to adjust the centering. The Fast was the first production road bike we know of to take a system that has been used on a number of time trial bikes - Storck (and Ridley) being early adopters. 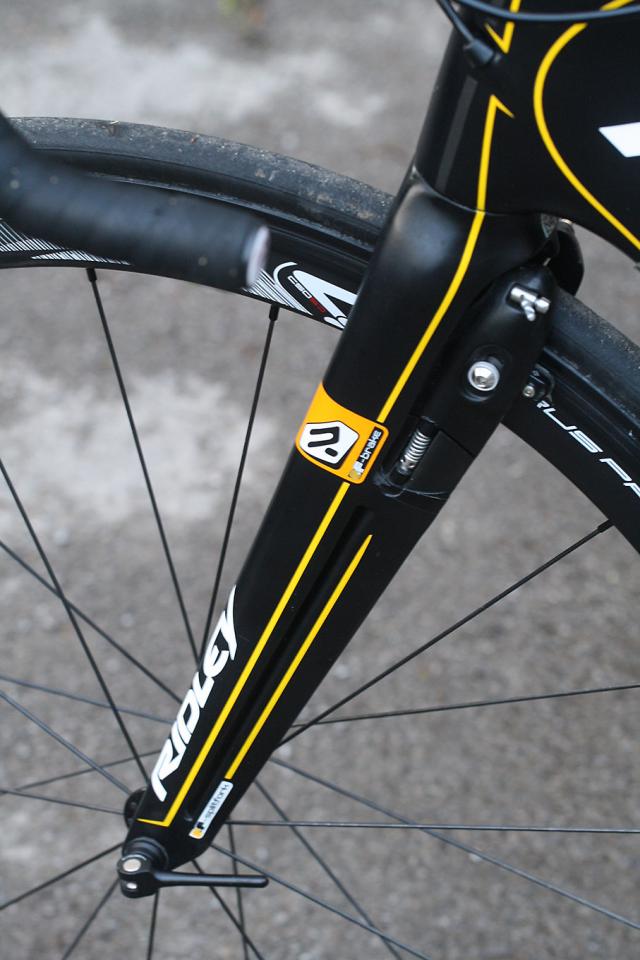 The other key aerodynamic feature is what they’ve dubbed F-Splitfork technology, and which amounts to slots in the fork and seat stays. This is a technology component manufacturer Oval Concepts developed a few years ago in their Jetstream fork, and which they licensed to Ridley for use in their Noah. The theory behind the slots is to reduce drag (7% compared to a regular fork) as the slots minimise air interacting with the spokes and wheels. I had an interesting chat with Paul Lew (of Reynolds fame) who told me that a lot of drag on a bicycle caused by airflow between the wheels and frame.

Elsewhere, the frame features a tapered steerer tube (1 1/8- to 1 1/2-inch) and it’s been designed with stiffness in mind as much as aerodynamics. The integrated seatmast has a single bolt clamp on the top which offers a large amount of fore-aft adjustment. The clamp itself offers a small degree of height adjustment, but as with all seatmasts, you want to measure five times and cut once. 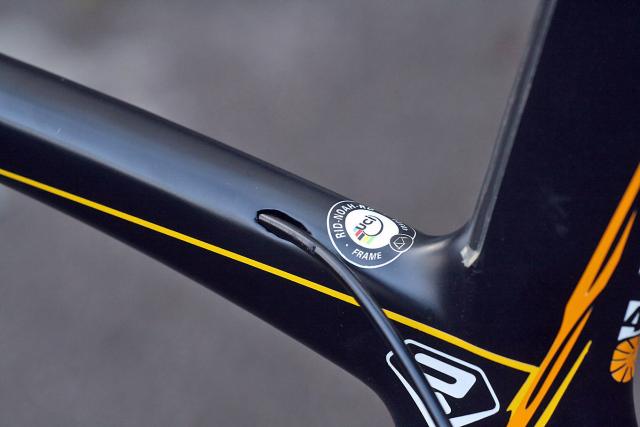 Cables in the carbon frame are all routed internally. The rear brake passes through the top tube, and the gear cables run along the downtube. A plastic cable guide grommet on the belly of the bottom routes the cables to each derailleur, as well as making it easier to thread the cables inside the frame. But as I found out when I had to fit new gear cables to the test bike when it arrived, it’s far from an easy process. It’s doable, just extremely fiddly. The internal cable routing is designed to work with both mechanical and electronic groupsets, with the fitting of specific stops at the entry points in the frame. 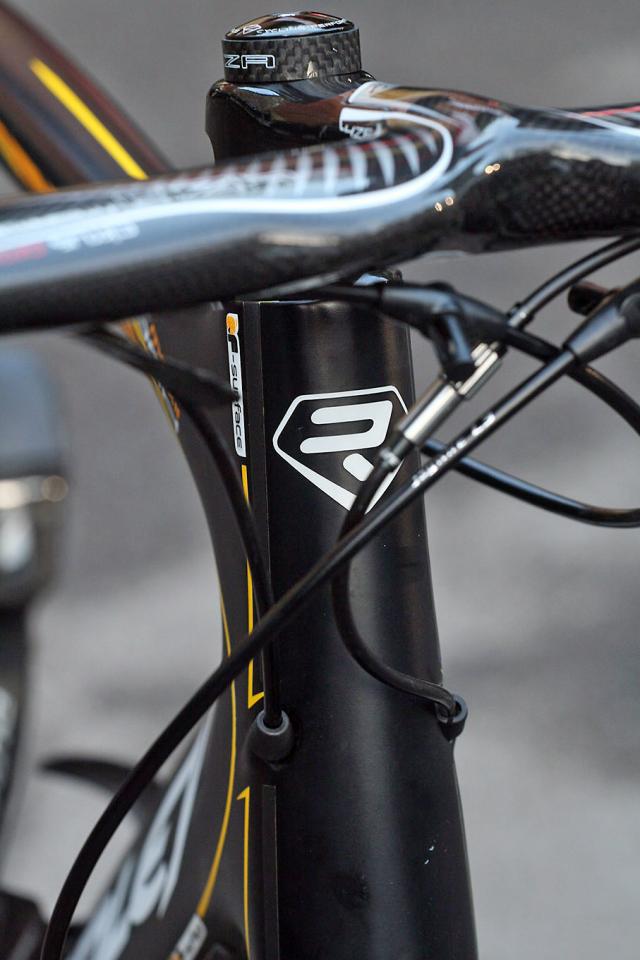 To make it easy to swap between models, the Noah Fast shares the same geometry as the Helium SL. Our medium 56 cm test bike has a 56cm effective top tube with a 50 cm seat tube. The head tube is 17.5 cm which places it a little higher than some race bikes. Head and seat angle are identical at 73 degrees. The wheelbase is 99 cm. Stack and reach are 57.5 and 39 cm respectively. 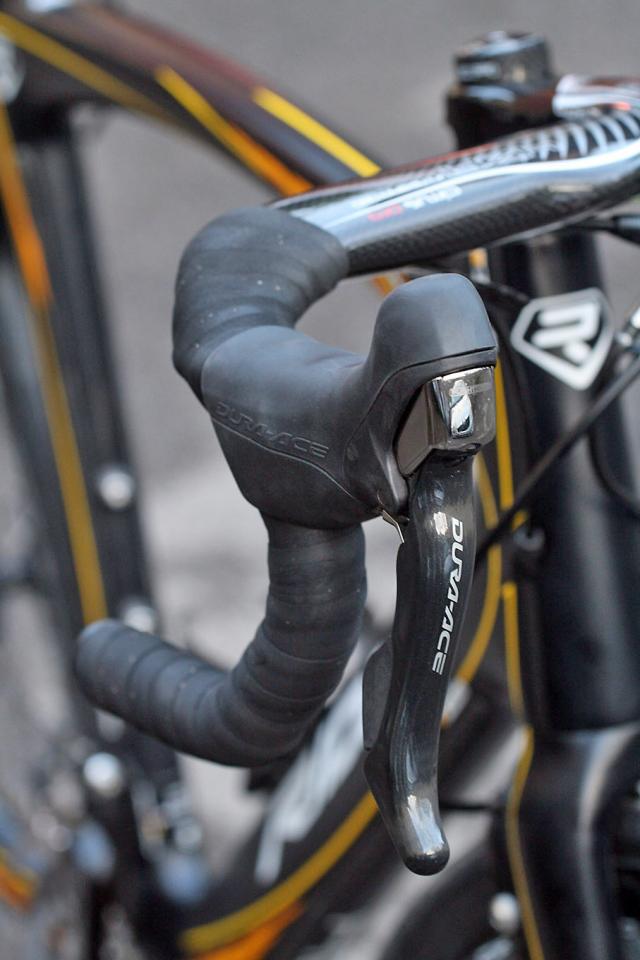 Ridley sell seven builds, starting with a Shimano Ultegra model up to a Lotto-Belisol team replica with Campagnolo Record EPS (though the team ride Super Record). Our model is fitted with Shimano Dura-Ace 10-speed mechanical with a Rotor 3D cranks.

Ridley’s in-house compentry brand 4ZA supply all the finishing kit and wheels. The one-piece integrated stem and handlebar is a further aerodynamic boost but does limit the possibility of changing stem length, so you would need to change it at the point of purchase. 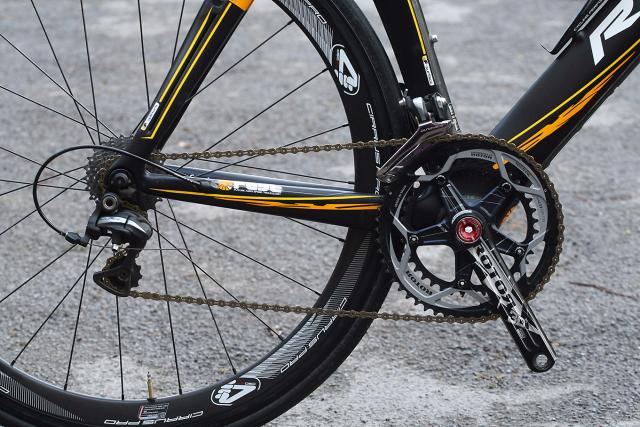 The wheels are Cirrus Pro AC58, a full carbon clincher rim with a 58mm depth and 1.7kg weight. Hubs have sealed cartridge bearings and there’s 20 double butted spokes in the front wheel and 24 in the rear wheel. Tyres are Cirrus Pro 23mm. All that gives a complete weight 7.38 kg (16.27 lbs) on the roadcc scales of truth.

Which just leaves the price. This bike as pictured costs £6,400. You can buy the frame on its own for £3,899. It’s not cheap, but remember, this is cutting-edge aerodynamic stuff and there’s a huge amount of research and development that has gone into it.

There’s some serious competition in the aero road bike market, with the likes of the Specialized Venge, Scott Foil, Cervelo S5 and newly announced Giant Propel all vying for the moniker of the fastest road bike.

Aero bikes aren’t anything without claims. Here Ridley claimed a saving of 20 watts to sustain a speed of 25 mph compared to their own Helium. That may not sound like a lot, but if you’re in a solo breakaway in a road race, you’ll appreciate even the smallest performance gain. Gaining 20 watts through training isn’t the easiest or quickest thing either, so it will be interesting to see if the Noah lives up to its claims.