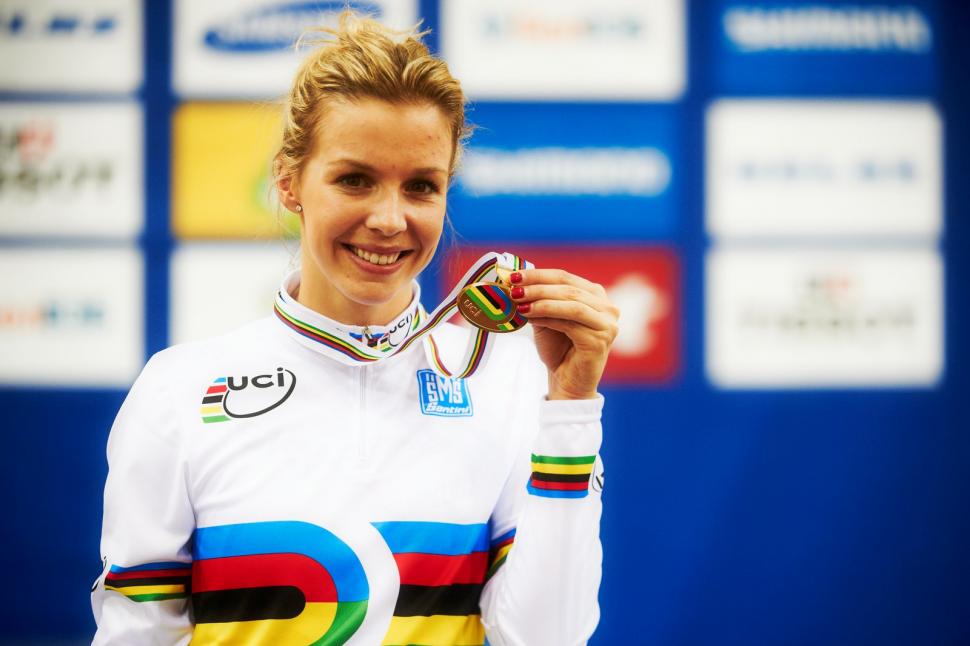 Britain's reign continues in women's individual sprint, rider from Abergavenny can double up in keirin tomorrow...
by Simon_MacMichael

James, who had already won bronze medals earlier this week in the team sprint and 500 metre time trial, also goes in the keirin on Sunday, an event in which, like the sprint, she has been junior world champion.

The 21-year-old from Abergavenny had to come from behind to win the best-of-three final as Vogel took the opening heat, powering off the final bend and pulling alongside James to win by a whisker.

The advantage seemed to lie with Vogel, who earlier this week partnered Miriam Welte as they successfully defended the team sprint title they won in Melbourne last April. The pair also won that event at the Olympics in London last summer.

However, James didn’t panic, and came past Vogel in the second heat to level at one-all.

In the third and deciding heat, she led from the front and this time the German was unable to find a way past as James succeeded Victoria Pendleton as world champion.

“I can’t even describe how I am feeling right now,” reflected James, who had earlier beaten China’s Shang Guo in the semi-final.

“It’s just not sunk in. I didn’t think about it being Vogel who I was riding against because I have never beaten her before.

“If I think about the rider too much it messes with my head so I thought of it being another race, don’t think about it being in the world championships just that I wanted to win.

“I stayed really calm, did my thing and came away with a gold medal.

“I had targets in my head and I wanted to get top eights in everything and I didn’t know who was here and what form everyone else had but to be stood on top of that podium tonight is such a good feeling,” she added.

While James has a chance to do the sprint and keirin double on Sunday, there will be no such opportunity for men’s keirin champion Jason Kenny, who went out in the quarter finals of the individual sprint.

Kenny has reached the final in each of the past two years, being beaten by Grégory Baugé of France on both occasions.

However, the Briton was awarded the 2011 title after Baugé received a retrospective ban for whereabouts violations, and Kenny also beat the Frenchman to take gold at the London 2012 Olympic Games.

With Philip Hindes and Matt Crampton exiting the competition earlier, Great Britain won’t have a representative at all in the last four when the semi-finals take place on Sunday.

Two other events were decided on Saturday, the men’s omnium and the women’s points race.

The latter event saw Sofia Arreola of Mexico take her second silver medal in consecutive days – she was runner-up in the scratch race on Friday – as Jarmila Machačová of the Czech Republic beat her to the rainbow jersey by a solitary point.

Italy’s Giorgia Bronzini, twice world road race champion and a past winner of world cup points races on the track, was third.

Aaron Gate of New Zealand, meanwhile, won the men’s omnium in a competition that went all the way to a dramatic kilo time trial, won by Gate, who earlier in the competition had taken the flying lap and the points race.

However, the 22-year-old Gate had to wait to find out whether he had indeed taken gold after defending champion Glenn O’Shea was allowed a re-ride due to a mechanical issue.

The Australian was only able to post the fifth fastest time however, and finished third overall. Great Britain’s Jon Dibben finished eighth.

The programme, and broadcast times, for Sunday’s final day of competition, is: