Okay, shades on everybody the Pinnacle Dolomite Five has just landed here at roadcc Towers in all its zingy orangeness. Evans have enjoyed some success with their inhouse Pinnacle bikes in recent years and took things up a notch when they signed up James Olsen - from Genesis. The £900 Dolomite Five, is the top Dolomite in the first 100 per cent Olsen range of Pinnacles… sort of the pinnacle of the Pinnacles then, sorry.

Anyway, it's an aluminium frame designed to accommodate mudguards if you wish and fatter tyres with the geometry close to that of a race bike, it looks an ideal bike for racing, sportives and just riding along so a do it all bike for British contitions then. Olsen has form when it comes to this sort of thing, but more on that in a moment.

Let's briefly talk Pinnacles we have known. We were a bit underwhelmed by the £450 Dolomite One when we reviewed it a couple of years back, but the marque has built up a solid reputation for dependable, workaday steeds that won't let you down and won't break the bank either. This year's Dolomite Five and its siblings though are all about moving things on a bit injecting a bit of charm, character and fun - workhorses you'll be more than happy to ride after the working day is done - that's the way we understand it anyway. 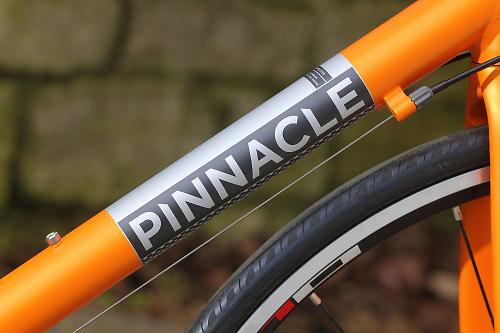 James, it is worth pointing out, was responsible for the Genesis Equilibrium, one of roadcc’s favourite bikes. While there’s a clear difference in materials, the Equilibrium steel, the Dolomite Five aluminium, they have a lot in common. They are both designed to be versatile, of equally being up to the challenge of a sportive as much as being a mile-munching winter bike with mudguards and a rack for commuting duties. And the Equilibrium we tested is roughly the same price as the Dolomite Five we have here, so it’s worthy of comparison. If you're in the market for a bike like this in this price range, it's fair to say these two could be on your shortlist. We'll find out how far up the list the Dolomite Five will be when Stu Kerton sticks some serious miles in to it. 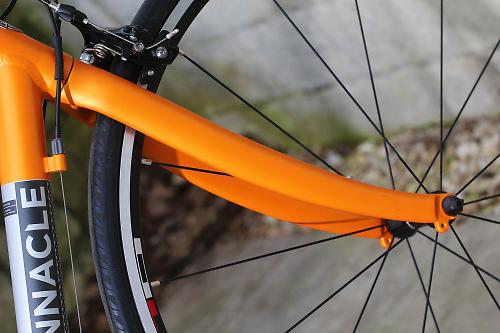 So, the Dolomite Five then. First, doesn't the orange paint look just, well fab? Just me? Whatever, it's certainly an attention getter. Underneath the paint and smart decals is a 6061-T6 heat-treated aluminium frame with a taper-oval shaped top tube and slim curved seat stays. A carbon bladed fork with aluminium steerer tube slots into the 1 1/8in head tube. The frame has been designed with versatility and key selling point, and as such it’s fitted with long reach brake calipers and has the necessary mounts to fit mudguards if you wanted. And looking out the window right now, that’s not a bad idea at all. 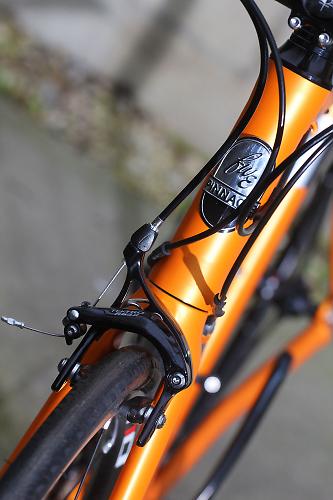 It’s a competitively specced bike for the money, with most of a Shimano 105 groupset. There’s an FSA Gossamer compact chainset, a popular choice at this price, Its 50/34 chainrings combined with a 12-25t cassette give you a nice spread of gear ratios. You can’t get Shimano 105 long reach calipers, to there’s Tektro R539 57mm deep drop brakes instead. Shimano also supply the RS-10 wheels, a solid choice which with 16 spokes in the front wheel and 20 out back (though the spec sheet does say 32) should prove to be reliably dependable. Tyres are Kenda Kriterium 25mm tyres, which offer the extra comfort without a discernable loss of rolling speed a rider choosing this bike will undoubtedly desire. Finishing kit, by which we mean the handlebar, stem, seatpost, saddle and bar tape, is all Pinnacle branded kit.

Weight for the complete bike on the roadcc scales is a 9.15kg (20.17lb). That compares favorably with the Genesis Equilibrium’s 9.3kg weight (20.5lb), although we might have expected the aluminium frame to contribute to a little more of a weight saving than that.

Stu, who reviewed the Genesis, is out on the Dolomite Five now pounding out the miles so if you see an orangey blur on the Wiltshire lanes….