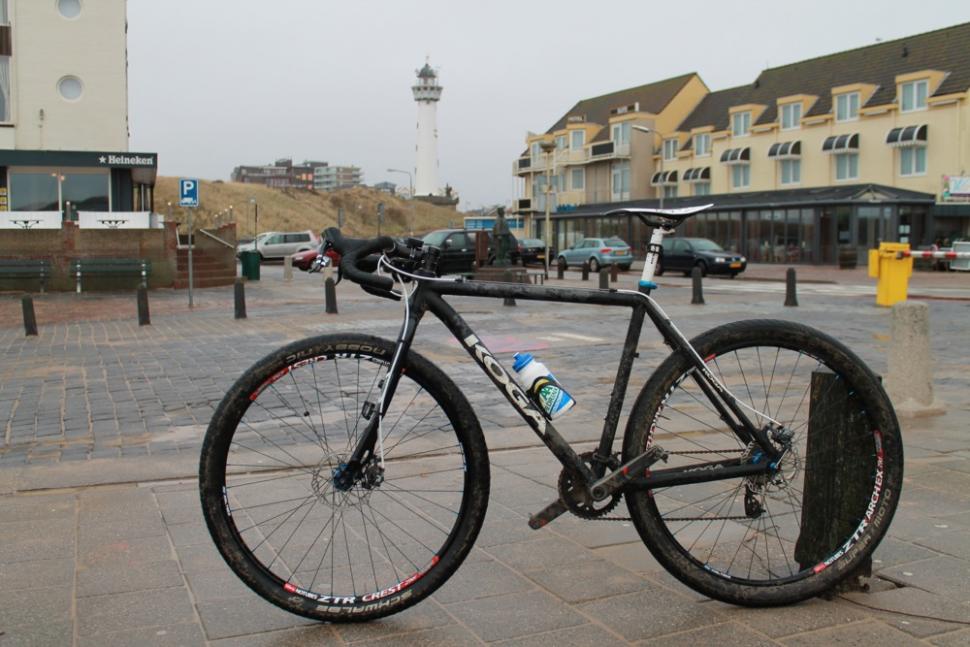 It's the next big thing in cycling... maybe
by Mat Brett

Koga have developed a prototype beach racer in association with riders from the Mitsubishi mountain bike team. It’s not something we know a great deal about over here so we thought it would be interesting to take a look (sometimes we stretch the definition of ‘road’ on road.cc)…

Beach racing might not be big in the UK but it’s a popular winter sport in Koga’s homeland of The Netherlands. Last weekend’s Egmond-Pier-Egmond beach race, for example, attracted more than 3,500 riders. It looks to us a bit like cyclocross but with less mud and more sand.

“Beach races demand special characteristics of a bike,” said Martin Schuttert, Product Manager at Koga. “We took a Koga cyclocross frame as [the] basis – that is as close as you can get to a proper beach bike. It is also made to carry the bike on your shoulder.

“We adapted this frame to make it even more suitable for beach racing. The frame was widened for the extra wide beach tyres and also the rear end is longer. This way we have developed a bike that finds its way easily through the loose sand especially at long, straight routes.”

Why don’t we have beach racing on this side of the Channel? It looks fun. And we live on an island where no one is all that far from a beach of some description – although I guess that pebbly beaches are going to be a whole different challenge.

Here’s a vid of a beach race from last year to give you an idea of what they’re like. Warning: it contains talking in a language you won’t understand.

Mitsubishi rider Ramses Bekkenk was closely involved in the development of this bike.

“It is very aerodynamic by using a short head tube and a special handlebar,” he said. “As a result of the steep seat tube angle, you are closer to the bracket. The Koga beach facer exceeds my expectations. It is very fast and offers a lot of traction. It is really fun to ride too.”

Tyres are clearly crucial in beach racing. The Koga prototype pictured features a Schwalbe Super Moto tyre at the rear. It’s very wide at 2.35in (60mm) but the profile is fairly smooth so it doesn’t get caked in sand. The front tyre is a Schwalbe Nobby Nic.

As you can see, the SRAM drivetrain uses a single chainring and low gearing and the braking comes courtesy of cable-operated discs. The bars are interesting too; that’s a really shallow drop on there.

“This model could end up as a commercial model, to use for beach races but also for touring rides. I think we are at the beginning of something great,” said Martin Schuttert.

Right... First, does anyone know of any beach races in the UK? There aren't some big events out there that we've just missed? Second, if not, who is going to organise one?