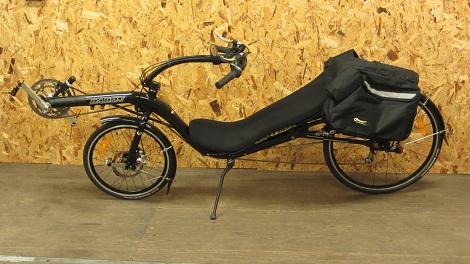 Recumbent rider deserves death and would be 'better off going to Dignitas', says councillor

A recumbent rider in South Derbyshire has been singled out for abuse by a councillor and other attendees at a Safer Neighbourhood meeting - because he 'might kill someone'.

The mystery cyclist, who rides around the Repton area, often followed and videoed by his wife in a van for his own protection, was the subject of animated discussion.

Michael Stanton, who represents Repton on South Derbyshire District Council, said that the cyclist got in his path as he attempted to leave the driveway of his home in his pickup truck.

According to the Burton News, he said to uproarious laughter: “I was about to pull out when I noticed this wire going past the bonnet with a pennant on it, then I saw this fellow go past lying on his back in a cylindrical type object.

“If it had been one second later I would have killed him. If he gets killed it probably serves him right, but the problem is, he may end up killing or injuring someone else.”

After the meeting he added that the cyclist would be "better off going to Dignitas" — the Swiss clinic which carries out assisted suicide.

One man who attended the council meeting but did not want to be named, said: “We see a lot of cyclists on the road and it’s not a problem because we keep out of their way and they keep out of ours, but we just can’t see this guy. He’s out of control.”

According to the paper, this man "said the same cyclist had recently collided with the back of his tractor and was now claiming £9,000 compensation as he had to import replacement parts from Australia," although it's not clear from his description who was at fault.

Police Sergeant Steve Todd, safer neighbourhood officer for the area, told the meeting: “If we have evidence of offences we could act, but just cycling down the road on that vehicle is perfectly legal.”