Van Nicholas target the distance market with combination of comfort, performance and value
by Tony Farrelly

Van NIcholas, purveyors of very lovely Ti bikes who have sent us details of two of their range highlights for next year – a completely new bike, the Mistral designed very much with the British sportive market in mind; and a complete re-working of an older big-mile favourite, the Zephyr. 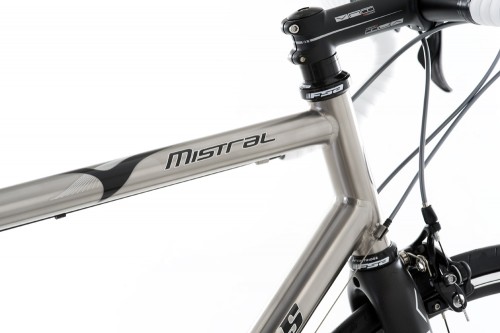 Let's take a look at the new bike first, according to Van Nicholas "The Mistral geometry has been engineered to deliver day-long ride comfort that still guarantees excitement. The Mistral possesses semi-compact dimensions with clearances for medium volume tyres that allow for a very comfortable bike with handling that is sharp and assured."

We could certainly see that appealing to a fair chunk of UK riders – what Van Nicholas hope will be the clincher in the deal is the price £1445. That buys you a bike with a combination of Shimano 105 – the front and rear mechs, brakes and levers with an FSA chainset, Fulcrum Racing 7 wheels, and a smattering of Van Nicholas own brand components and finishing kit amongs which are an all carbon front fork and an Arionesque saddle.

It's all good quality gear which while maybe not at the glamourous end of the scale will certainly get the job done without you hankering after an immediate upgrade.

Van Nicholas have a well deserved reputation for the build quality of their frames and own brand finishing kit – these pictures suggest build and finish quality on the Mistral is up to the usual standards, Van Nicholas say economies of scale in the production process mean have helped them achieve this for the money.

Unlike most other Van Nicholas machines, the Mistral will only be available as a complete bike and we're guessing that their website customising option won't be a goer either, but we'll update you on that.

There are six frame sizes available from 50cm - 60 cm in 2cm increments with a 'Tailor-made' option too. All frames come with a lifetime warranty. 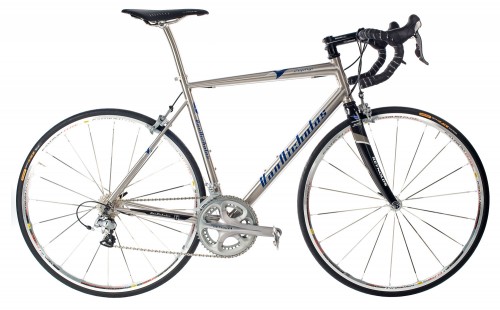 Sitting further up the Van Nicholas range the Zephyr does a similar job to the Mistral, it's a bike aimed at those aiming to ride big miles in a day, the difference here is in the more Zephyr's more pronounced performance edge and the even greater emphasis on comfort. Van Nicholas reckon that the new Zephyr is probably the most comfortable bike on the market.

And it is a new bike. The only thing that seems to have survived from this year's Zephyr frame is the name and the concept – the "Design mission" for the new bike being to produce a "comfort racer" which sounds pretty similar to the old bike and definitely a goal worth achieving. To that end, all the Zephyr's tube profiles have changed as has the geometry: the head angle is shallower for a more stable ride the wheelbase is longer - again with ride stability in mind we presume, the head tube is taller for a more upright, comfortable position without needing to resort to a big stack of spacers – Van Nicholas have also opted for a semi-integrated headset design incorporating a Chris King headset.

The new Zephyr frame has been designed in association with the Technical University of Delft - which was also involved with the design of the Astreaus – a bike designed very much with performance in mind. While performance definitely counts on the Zephyr the Technical University's input this time has been very much to do with helping Van Nicholas maximise the inherent spring of titanium for a more comfortable ride.

One way of achieving this is to opt for a semi-compact design – Van Nicholas aren't afraid to say that this helps achieve "a laterally stiff, yet vertically compliant ride" which means I'm allowed to say it too cos I'm quoting them.

So, the seat tube has been shortened - on 56cm Zephyr the seat tube is now 54cm giving even more exposed post (2cm – says Van Nicholas) thus adding extra cush to the ride. One by product of this is that if you are one of those people with a long body but shorter legs (like me) you'll be able to ride a semi-compact without losing the benefit because you've got the seat post right down. Hurrah!

The ride enhancing tweaks don't end there though research into power transfer and the flexing properties of titanium tubing undertaken at Delft must have played a part in the design of the seat stays, which are designed to flex under load. This bit of comfort-enhancing design is achieved by making the stays much thinner at the top where they meet the seat tube. Designing stays with a bit of extra flex is not a new idea – the trick though is ensuring that they flex in the right way, that they don't flex too much giving you a disconcertingly soft ride. We won't know until we try one, but from what we understand the Van Nicholas design of the back end of the bike also builds in a certain amount of flex into the top of seat tube where it absorbs the movement from the stays. The bottom part of the tube is much more rigid helping to maintain a stable pedaling platform.

No news yet on pricing for the 2010 model, but given the kit on the complete bike pictured here - we'd guess that complete bikes will start at around the £2000 mark with framesets coming in just under £1000 – though we stand to be corrected.

The new Zephyr will be available in six sizes from 50cm - 60cm in 2cm increments and there's a custom option. All frames come with a lifetime warranty.