Fizik launch all new and expanded cycle shoe range for 2013

Fizik have revamped their footwear range for 2013, updating the existing models, introducing a new road model, and entering the triathlon and mountain bike markets for the first time. We got a pre-launch look earlier this month at Eurobike.

Best know for their saddles and bar tape, the Italian brand entered launched their first range of cycling shoes two years ago with the R1 and R3 road shoes - available in male and female versions. Fizik's philosophy with their shoes was (and still is) all about delivering maximum power and maximum comfort in a stylish package - their shoes are designed to co-ordinate with their saddles and bar tape. Nice.

To complement the launch of that first range of shoes Fizik also launched a customisable - Flash Fit - insole developed with French specialists Sidas. The R1 has that insole as standard and you can upgrade any of the other shoes in their range with a set. They also work in other shoes too - Tone has a pair in his Shimano MTB commuting shoes and swears by 'em… which makes a change to him just swearing... he's potty mouthed that one. While the R1 and R3 have each been given a significant revamp, and we'll talk about them later, the big news is the launch of the R5 - Fizik's least expensive shoe. Like the existing R1 and R3, it’s handmade in Italy but it has its own carbon-reinforced nylon outsole. 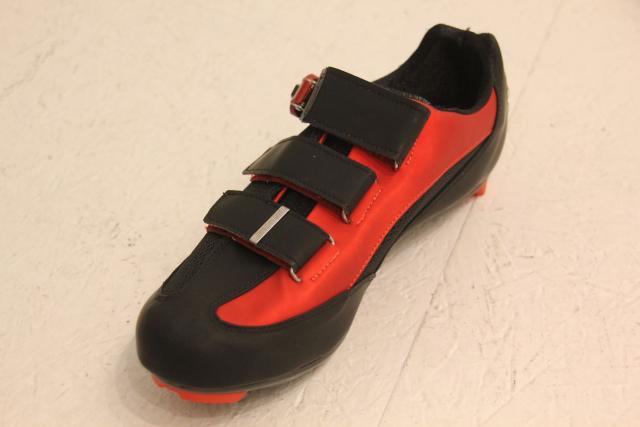 Rather than using kangaroo leather in the upper, Fizik have gone for synthetic Microtex with large areas of nylon mesh for ventilation – they’ve been keen to add more ventilation across the updated range. 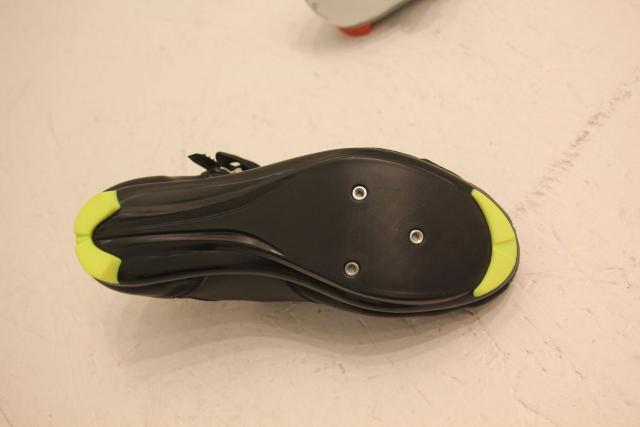 The closure design is similar to that of Fizik’s existing road shoes – two Velcro lower straps and a ratcheted upper strap – although rather than being made from sail cloth, the R5’s straps are Microtex. The buckle is aluminium.

The R5 is a touch heavier than the other Fizik road shoes but it’s still light compared to most; the claimed weight is 498g for a pair of size 43s. They’ll be available in white/silver/red, black/metal red, and black with fluoro details. The women’s version comes in that black/fluoro finish and also this white/red design. Fizik's women range is free of girly colours or flowers - essentially the distinguising feature is that they are available in smaller sizes - 37 to 42 in half size increments and then a full size jump to a 43. There is some overlap in sizing with the men's range which is bad news for big-footed Vecchiojo who took a shine to those white and red ones. Although UK launch prices have yet to be confirmed, they have just become available in Europe with a list price of €179 - it’s likely that the R5s will cost between £150-£170 – not cheap, but Fizik are sticking with high-quality here. Sizing for the men's shoes is 40 - 47 (in half size increments with a jump to  48. The top-end R1 and the R3 have been refreshed. The R1 gets a very stiff new carbon outsole and larger areas of nylon mesh than previously. There’s still plenty of kangaroo leather used over the toe and at the heel, and it keeps its carbon buckle and mouldable insole. You’re looking at a price of £299.99. The R3 gets a similar amount of upgrading. There's a new carbon-fibre outsole - the one previously used on the R1, and completely new colours - the original all-red shoe is no more. You still get the same kangaroo leather/nylon mesh upper and aluminium buckle. Fizik reckon it offers the same level of quality as a top tier shoe from other brands. It’s available in both men’s and women’s models at £219.99 for 2013. Sizing is the same as for the R5 and you get a choice of white/black/red or white/royal blue in the men's range. The womens R3s come in either white or, our choice as the best looking shoe in the line-up, black/crema - which we failed to get a shot of at Eurobike. Check them out here though on the Fizik website. Pretty much as soon as they launched the road shoe Fizik were being asked to do an off-road range, and here it is. The MTB range features M1 and M5 and M5 Donna models with similar features and materials and pricing as their road equivalents. We reckon that as well as mountain bikers, these might appeal to tourers and urban cyclists who need to walk in their riding shoes. Maybe that sole might be a bit chunky for round town. The top-level M1 (above) comes with a carbon-fibre outsole and an upper that features kangaroo and anti-scratch leather and nylon mesh - oh, and those sail cloth closures. It also has it's own speically designed ratchet closure that allows you to micro-adjust on the fly. Although we didn’t get to try it, Fizik say the tread is super-grippy. These are priced at £299.99. The more affordable of the two MTB models is the £160 M5 which comes with a carbon-reinforced nylon outsole. The upper combines anti-scratch leather with Microtex and nylon mesh. These are available in both men’s and women’s versions at £160 a pair. Not content with expanding into the MTB world, Fizik have also entered the triathlon bike shoe market with the K1 – the K standing for Kona, where Ironman Hawaii takes place – in both men’s and women’s versions (that's the men's below). It's top end only for their tri shoes with no K3 or K5 offerings. 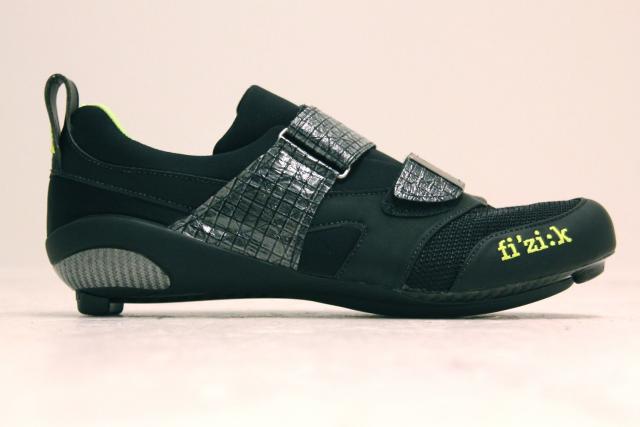 As is usually the case with tri shoes, there’s a large opening for you to get your foot inside while you’re on the bike, plus a big heel loop to make it easier. There are two straps although, once set, you’ll never need to alter the lower one.

Like the R1 and the M1, the K1 gets a mouldable insole so you should get good support in the arch, along with a 3D Flex outsole which, as the name suggests, flexes a little. The idea is to save your forefoot for the run. Plenty of ventilation in the upper should help dry out feet that are still wet from the swim. The men’s K1 is priced at £299.99 and the women’s at £349.99 - we're not totally sure why the women's tri shoe is the most expensive shoe in Fizik's entire range. Those aren't two different colourways above - that's a pair. Got to say, the idea of different coloured left and right shoes is strangely appealing.

For more details on the Fizik range go to www.fizik.it or their UK importer www.extrauk.co.uk.