Going far? have a gander at our pick of the most interesting touring bikes of the show + mighty gallery
by dave atkinson

Touring bikes were a bit scarce at Eurobike this year. Although every european manufacturer makes a huge range of urban and trekking bikes, the better specced of which can certainly be used for touring, there weren't that many dedicated expedition bikes on show at the show.

What there was we sniffed out though, and there were a few interesting trends to take out of the show, the first of which was the prevalence of the Pinion gear system. Well, in the German hall at least. It might take a bit longer to make it over the border. 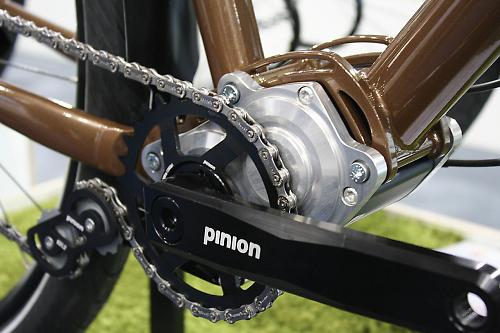 For those of you that aren't familiar with it (we covered it last year), the Pinion gearbox replaces a standard bottom bracket and gives you 18 sequential gears with a top-to-bottom ratio of over 600%: that's more than even a triple MTB setup with a wide cassette. There's lots of other stuff to like about it too. For a start, all the weight of the system – it weighs about 700g more than a derailleur setup or a Rohloff hub gear – is concentrated in one spot in the middle of the bike, low down. That's good for weight distribution and centre of gravity. Everything's completely enclosed too, with the system running oil-bath internals and rated for 60,000km. The most obvious plus point over a hub gear is that there's no weight in the rear wheel, or any faff to take the wheel out. All you need is a single sprocket, and you can have nice wide flanges for a stronger wheel. You can run a quick release too, and a standard vertical sprocket; there's an optional chain tensioner that attaches to the gearbox itself. All of this makes it pretty much a shoe-in for expedition work; all of the benefits of a hub gear with none of the disadvantages. Any downsides? Well, it's expensive, although when we talked to Tout Terrain they told us you could have the gearbox as an option for about the same cost as a Rohloff hub, so it shouldn't be prohibitive. Like the Rohloff, the Pinion uses a cable that needs to be pushed and pulled to change gear, rather than a spring release like a derailleur. That means it's a grip-shift-only solution at the moment so not really an option for drop bars. The main sticking point with this or any other bottom bracket gearbox is that it requires the manufacturer to make the frame specifically for the system, you can't just bolt it on. That's started to happen, with Tout Terrain, Patria and Velotraum showing off Pinion-geared bikes. For bikes that don't require the weight, complexity or cost of the 18-speed system Pinion are reportedly working on an eight-speed version which will be just the thing for city bikes. 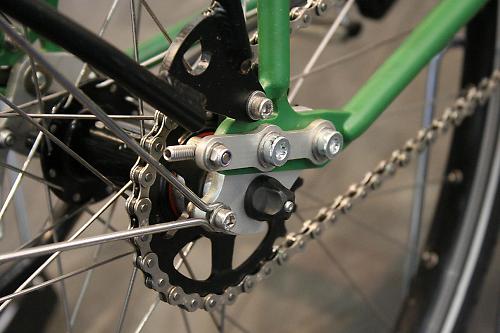 Patria had the Pinion system specced on their sport-touring Helios (above) but for the full-on expedition bike, the Terra, they'd stuck with the Rohloff hub. The Rohloff was still probably the dominant gearing system on exhibition bikes at the show. Obviously manufacturers like to show off their shiniest steeds at Eurobike so it's not surprising that there was a lot of them about. 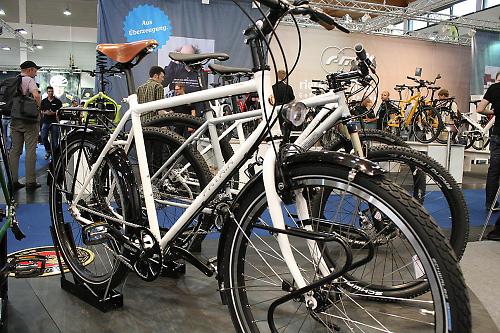 The Terra is a chain drive but there were plenty of belts about too, including on the Pioneer on the Van Nicholas stand. 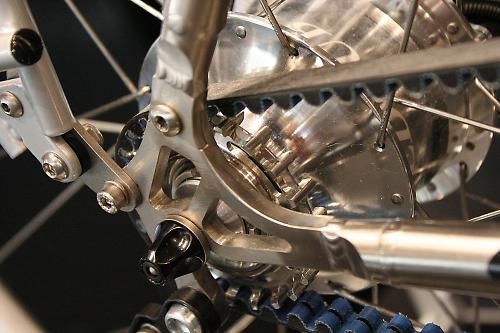 Van Nicholas and other manufacturers have started to use the centre-track version of the Gates Carbon belt. One of the main issues with the original incarnation of the belt is that it's very sensitive to misalignment of the chainrinf and sprocket. There's no longitudinal give in a belt like there is in a chain, so if the two cogs are out of line the belt works its way off. The new belt has a channel cut into the centre of the teeth which align with a raised central section on the cogs which helps to keep everything where it's meant to be. Van Nicholas, in common with many other manufacturers, spec Magura hydraulic rim brakes on their expedition bikes. We don't see that many of them in the UK but they're a very common sight over in mainland Europe, on city bikes and tourers. Here's another bike that was running them, the TX-1000 (not in any way affiliated with the Terminator franchise) from VSF Fahrradmanufaktur. This bike had another interesting feature, the Speedlifter handlebar height adjuster. Back in the old days, if you wanted to change your bar height it was simply a case of undoing the wedge bolt in your stem and yanking it up an inch (it was inches in those days). The ahead system changed that; you can still adjust the height but it means having a goodly stack of spacers and you need to retention the headset after a change. Not as simple. Other systems, such as the NVO stem that uses a long shim with the stem on top, as used on the Jamis Quest. The Speedlifter is a quick release system, with an extending section that sits inside the steerer. Just undo the QR on the bottom section and you can pull the bars up or slam them down with ease. The system requires you to cut a slot in the steerer tube of the fork (Speedlifter have a special tool available for that) but it'll work with pretty much any metal-steerer-tubed 1 1/8 fork. 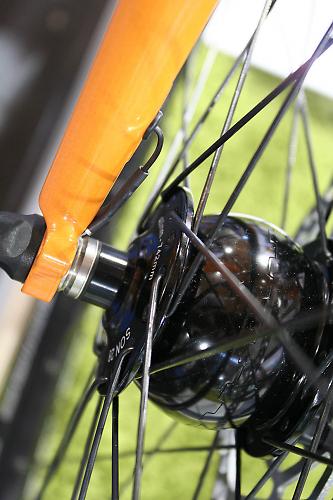 Dynohubs were everywhere, of course. The Schmidt SON is still the go-to hub for many but others are gaining ground. Most of them are based on the internals from Shutter Precision, who use a clever ring that's magnetised to give alternating poles round its circumference. As a system it's simpler than having to fit individual magnets to the hub body like Schmidt do, and they've licensed it to a number of other companies. Supernova were the first ones to pick it up so far as we know; in fact we were testing the dynamos as Supernova units before we even knew who was making the inside bit. Supernova use SP's technology but combine it with their own custom hub body and high-spec bearings, and their units have proved very popular. They're now available in a wide range of colours too. 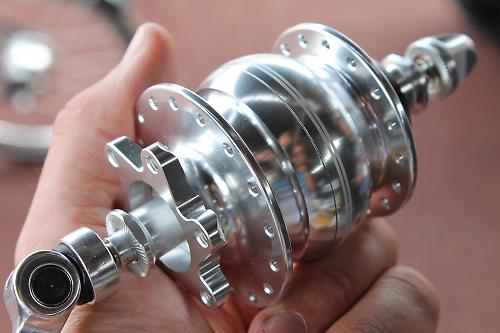 Biologic have picked the SP internals up too, and they're making two new dynamos for next year one standard unit and one using SP's switchable system which allows you to turn the generator inside the hub off for minimal resistance when riding. 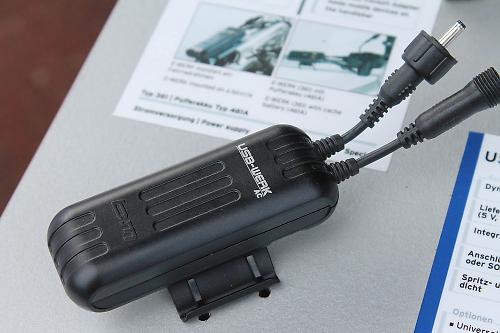 To go with dynamos there's an increasingly wide range of lights and batteries for powering the myriad USB-chargeable devices we now feel required to cart around with us when riding: phones, GPS units, cameras and more. Tout Terrain have long offered their Plug USB port, which sits within the steerer tube and offers a USB connection at the top cap. Busch and Muller's new Luxos dynamo light has a bar-mounted controller that also features a USB charging port, and the manufacturer also makes the USB-Werk battery that charges from the dynamo and allows you to charge up your gubbins when you're taking a break from the saddle. 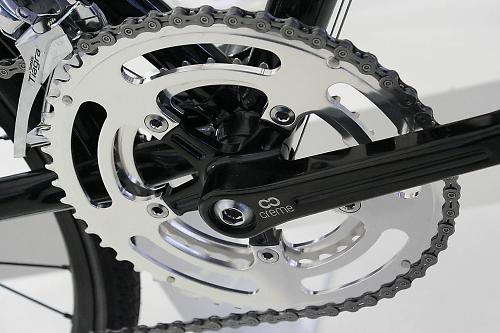 Not everyone's tourer was bristling with technology. How about this, the Lungo from Creme. At €1,099 you should be able to get this with your cycle-to-work dollar; it features a Cromoly frame and fork, down tube friction shifters, a quill stem, Brooks saddle and bar tape and leather toeclips. Lovely. The 105 rear mech is the only concession to modernity, and we're guessing they only specced that because retro derailleurs are pretty difficult to come by… 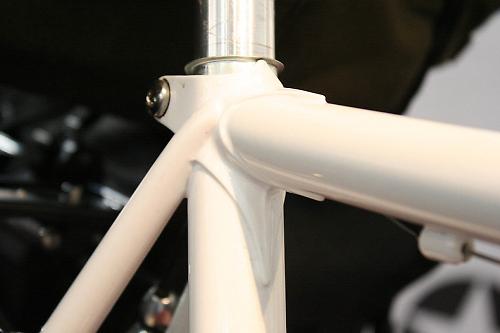 Also looking classy and understated was this, the Tour from Allegro bikes. Allegro are an Australian brand started by Richard Ayling. Starting out as a road racer in the 1970s, Richard has worked as a team manager and trainer for some of Australia's hottest cycling talent but now he's putting his energy into good-looking and well-specced town and country bikes. The Tour has at its heart a triple butted Cromoly frame, with relaxed angles and a long wheelbase. Currently they're not distributed in the UK, but we reckon they'd find some fans over here. Lastly, e-bikes and touring. Maybe not an association you'd naturally make, but Haibike have recently sent 28-year-old Maximillian Semsch on an 18,000km circumnavigation of Australia on a bike running a NuVinci 360 continuously variable hub gear and the Bosch bottom bracket power system. Obvioulsy you'll need to be riding between places you can charge your batteries (unless you have a very large solar panel and a lot of sun) but the weight penalty of the drive system is pretty small when you're lugging 40kg of equipment on your bike, and anyone who's been full-kit touring will know that there's times when a bit of a push on the hills would be more than welcome. Max's video diary of the trip is at www.what-a-trip.de, you'll need a good grasp of German though.