Light, stiff and aero are what's in at Wilier for 2010… oh, and a touch of steel too
by Tony Farrelly

Wilier have released the first details of their new 2010 range, and an interesting one it is too. The range topper is the Cento, as it has been for a couple of years now, and that's available in a number of guieses including a super lightweight version – the Super Leggera, a specially tweaked Di2 versions, and one decked out in a world championship paint job in honour of Allesandro Ballan's 2008 win on one.

More on them later, because the big interest is the re-birth of the Wilier's Imperiale a bike that's been in their range since 2003 – this year's version is though something of a departure from the past and represents Wilier's take on the aero optimised road bike as defined by the Cervelo S3.

Essentially what Wilier seem to be doing with the Imperiale is take some of the design elements of the Cento (lightness and stiffness) and blend them with some from their John Cobb designed Crono time trial and triathlon bikes to deliver an aero optimised road bike that is as stiff as it can be, as light as it can be and as aerodynamic as possible - “Designed by the wind” is the tagline on Wilier's Imperiale micro site.

The result is a frame that is made up of three monocoque elements, the front triangle being one, and the rear triangle the other two.

We're always banging on about the fact that the laws of physics are immutable so manufacturers designing bikes in wind tunnels should in theory lead to aero bikes that all look the same, but they don't. Why not? “It's the marketing departments” says the little devil on my left shoulder. “Don't be so cynical – it's the constantly evolving application of technology and materials allied to our ever growing knowledge of aerodynamic priniciples and how to apply them” says the angel on my right… at least I think it was an angel.

Either way, the Imperiale's head tube goes some way to proving our point being similar in height, profile and shape to current designs from Trek, Felt , and Cervelo. As on the Tri Crono the aero down tube features a cutaway scoop behind the front wheel to aid airflow, the one on the Imperiale is a less pronounced affair than the Tri Crono's. There is also an integrated seatpost – something that the Italian manufacturer's have stuck with over the last few years, but the real action takes place around the back end of the bike. The frames most striking feature is the way the seatstays, which are effectively one piece, wrap around the seat tube – the idea say Wilier is to help channel air around the junction of the top tube and seat tube (which like the down tube features a cutaway for the wheel). We're guessing that the difficulty of putting all this together is why the rear brake cable isn't internally routed throught the top tube, that and the flat profile of the tube.

The junction of the bottom bracket and chainstays is another area to get the aero treatment with the stays shaped to act as “slpitters” to divert air around the wheel which Wilier reckon will impreove the bike's stability. And the forks and rear dropouts have been re-shaped in the wind tunnel too

Claimed weight for the Imperiale is 1130g for the frame and 360g for the fork (no word on what size that relates to, but we'd guess that it's the medium) so it's light but not super-light, but then that's not the name of the game here. There will be six sizes available XS – XXL and there are two colours: white and carbon or red and carbon. 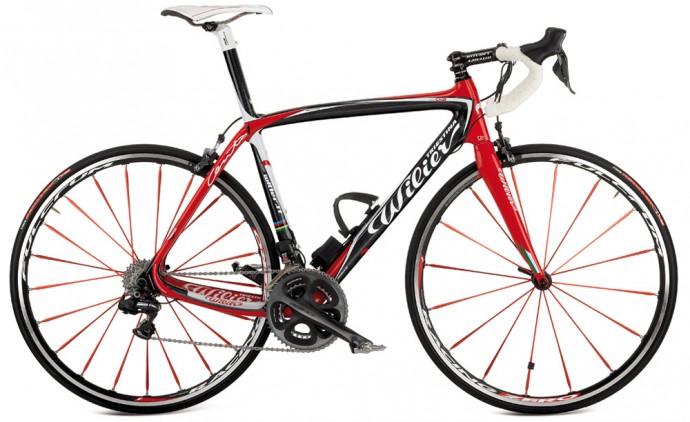 The big news for the range-topping Cento is the introduction of the Cento Di2 with integrated ICS (that's Inside Cable System) the frame having been tweaked slightly to accommodate Shimano's electronic groupset. The rest of the frame is the standard Cento monocoque designs built from Mitsubishi 46T carbon.

The Cento Super Leggera is the other variant on the standard Cento 1 in the 2010 range. Ridden by the Lampre team during the 2009 season the Super Leggera aims to shave weight while maintaining strength and stiffness. Wilier say they have achieved this by adding 60T Mitsubishi carbon fibre in to the 46T mix to strengthen the frame in crucial areas. The aluminium sleeve moulded into the frame is also of a lighter design than on the standard Cento and even the top coat of paint is lightweight – no, really. All that effort according to Wilier results in a machine that delivers all the performance of the Cento 1, while weighing 130g less.

As with the Imperiale Wilier have put together a Cento microsite which is well worth a visit. 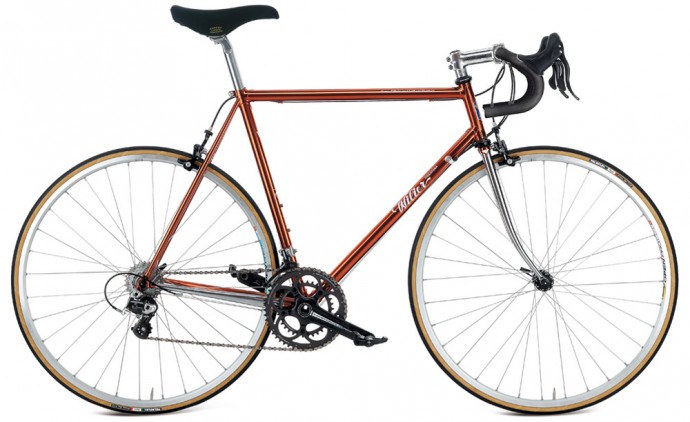 The only bike in the Wilier range that isn't a monococue of any description, isn't carbon, and doesn't have an integrated seat post (apart from the Izoard), but be interesting if it did, the Gioiello Ramato is Wilier's acknowledgment that there is still a market out there for classic steel race bikes and that if you've got the racing heritage you might as well exploit it just like Colnago have been doing for years with their Master X Light.

The Gioiello Ramato is a lugged steel beauty with chrome detailing and what was (is) Wilier's signature colour, Ramato – a sort of copper colour.

No details yet on price and availablily, but as soon as we have them we will stick them on here. To find out more about all of Wilier's 2010 range visit www.wilier.it