The mad, bad, and beautiful plus a quick look at the Eurobike trends coming soon to a bike near you
by Tony Farrelly

We'll bring you more considered thoughts on what we've seen later but for now here's some quick first impressions from a canter round the halls last night.

Not all the bikes were out when we had a look around yesterday, but of what we've seen here are our favourites: 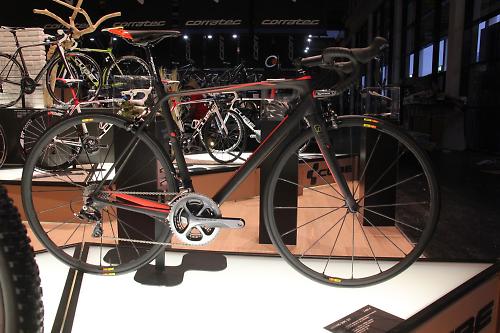 Cube Litening SHPC SLT… purely on looks so far, but we'd certainly like to get one in for testing. A piffling €7499 in these parts your money buys you a super high modulus twin mould monocoque frame with a Cube CSL Evo tapered full carbon fork, Shimano 11 speed Dura Ace Di2 drivetrain and Mavic R-Sys wheels. Nice. 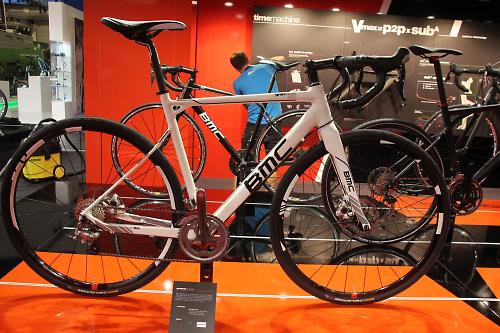 BMC GF02 Disc… truth be told we liked all the GF02s both the disc, non disc and Di2 option. The disc braked bike is billed as a fast commuter and given that it's built round a very light frame - the non disc bike tipped the scales at 7Kg 9 (George Hincapie's Race Machine is damn near 500g heavier) so even with the weight penalty of the Shimano discs we're taling a bike that should weigh not much more than 16lb. Oh, another nice touch on the disc version is the hidden rack/mudguard mounts as pioneered by Gary Fisher. The frames are aluminium, with very neat welds and the necessary clearances for 'cross tyres, BMC describe the geometry as 'cyclocross' too so handling should be stable. Drivetrain is the ever dependable Shimano 105 - no info on prices yet, but don't bank on it coming in under the cycle to work scheme limit. 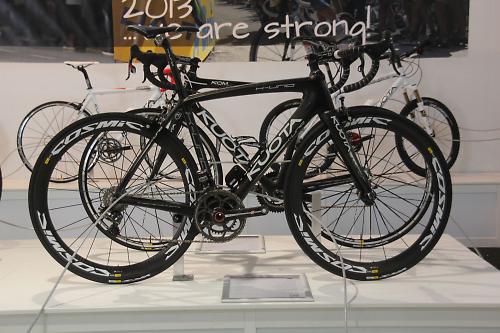 Kuota K-Uno… another essay in black minimalism at a suitably maximalist price - €9,989, obviously there is a psychology to selling but do you think the extra €11 would have put off the man with €9989 in his pocket? Anyway, if you've got the dosh the K-Uno offers a Kuota Karbon frame - no clue on the blurb to what modulus or layup, but pretty top notch is prob the answer. That comes dressed with full Campagnolo Super Record EPS and Mavic Cosmic wheels and Deda Zero finishing kit. We'll bring you more on the Kuota range later, there's also an interesting flat bar carbon bike - the Korsa, and the Kuraro aero bike. Casati Espresso… it's steel, it hasn't got a hole in it, but being Casati they have managed it on the rear stays of the lovely gold retro number that we couldn't lean in far enough to decipher the name off (we'll find out). Anyway, the Espresso looks to be Casati's take on the modern steel fperformance bike - chunkier head tube and some interesting changes in tube profile on the down tube all matched up with a nice slim back end - we'll be going back to find out more, but we're definitely hoping to see more bikes like this… And if you prefer your steel in a retro flavour Casati have that covered too with that very elegant gold number just behind it. 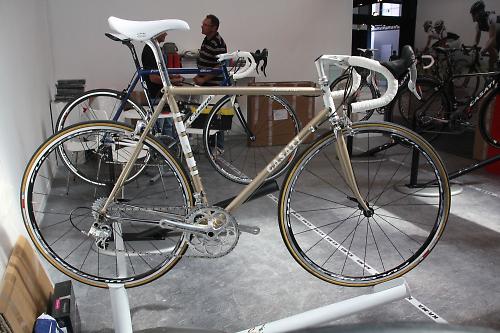 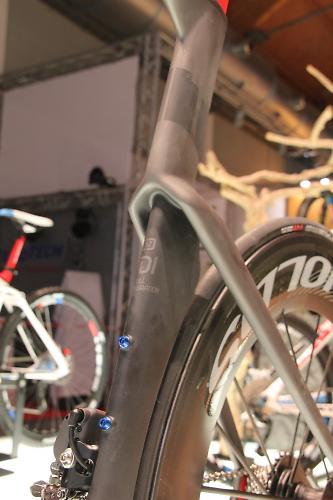 Cube Aerium TT bike… we'll also be going back to find out what's going on with those wraparound rear stays. Very organic even if at first site it does look a bit like the bike has melted, might be a bugger to get road grime out of too I expect. 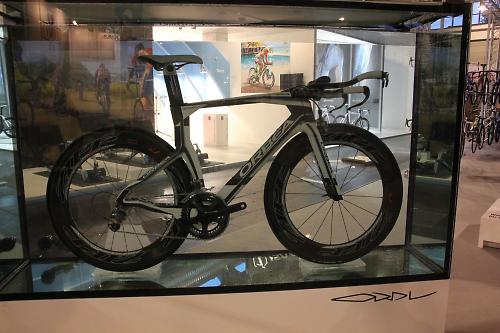 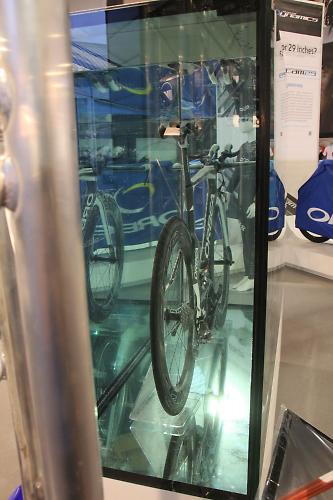 While we're on the TT bike theme… we can't not mention the Orbea Ordu. They put it in a tank of water, what's that all about? You guessed it, we'll find out. Early theories here are that its an homage to Damian Hurst… but that carbon TT bikes are more expensive to cut in half than sharks. 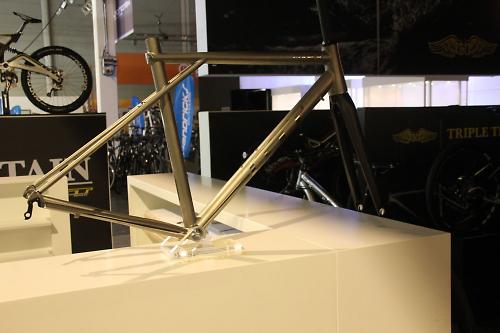 Finally the GT Tiatnium frame - it's good to see GT making stuff in Titanium again and this is a cool looking frame.

One trend that was immediately apparent… the world's economy may be in the process of crashing and burning but here on Planet Bike the thinking seems to be that there's money out there somewhere because no-one is afraid to have a seriously expensive bike in their range - not if the price tags on the new Kuota K-Uno and the Cube Litening (the thick end of €9,000 and €7,500 respective) we saw were anything to go by. We didn't see anything that tottered over in to five figures but that was probably cos most booths hadn't put the pricing out yet. 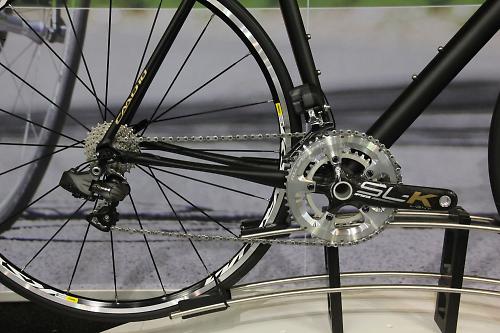 As expected there is plenty of Ultegra Di2 on show and also plenty of Dura Ace 11-spd too - the price spead for bikes toting the former is quite staggering, we saw it on machines from just over €2,000 to well over €5,000. 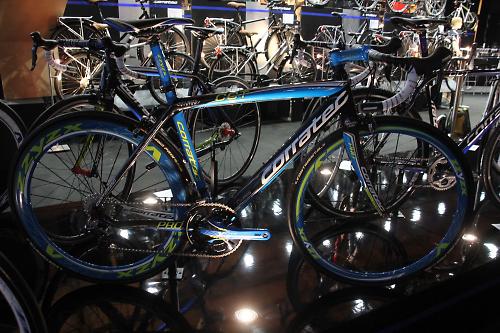 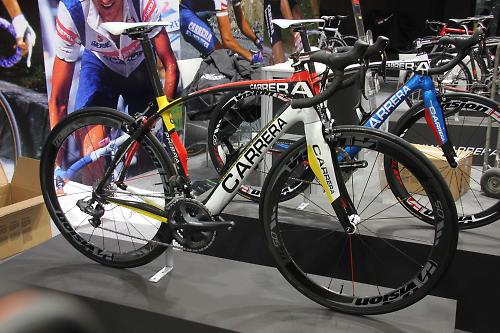 When it comes to aesthetics - bike manufacturers have gone one of two ways - matt black carbon with either black on black graphics or details picked out in neon red or blue – or LOUD. Particular favourites of the latter genre were the Lucozade (or possibly Doritos) inspired paintjobs on the Corratec CCT; and the Mondrian (or possibly Lookesque) finish on the Carrera Phibra… one of my favourite looking bikes which has its cartoonish qualities highlighted to even better effect… such a shame we can't buy them in Blighty. Of the more restrained bikes Cube once again show everyone else how it's done on the snappily monikered Litening SHPC SLT - we're going to take a wild punt and guess 'SLT' stands for Super Light Technology, can't get beyond Shit Hot… when it comes to SHPC though.

Disc brakes on road bikes… yes they're here, but so far Colnago apart we haven't seen any hydraulic ones - interestingly though we have seen some  prototype Shimano mechanical ones though on the Time Fluidity S road bike - more on that here. Word is product managers are waiting to see which way everyone jumps, and for someone to come up with an integrated lever. The rumourmill says that this has already been done and the SRAM have the tech and it's on at least one bike… that bike is a crosser and rumour further says that it's manufactuer has been given a year's head start on everyone else a reward for early adoption. roadcc tech ed, Mat is on his way to the Specialized stand as we speak. 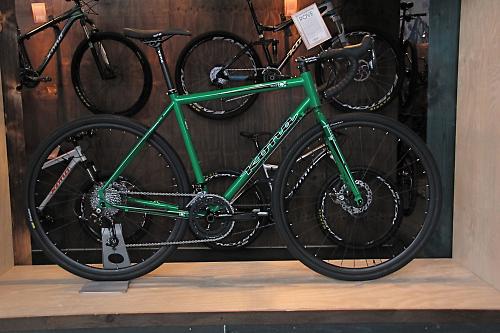 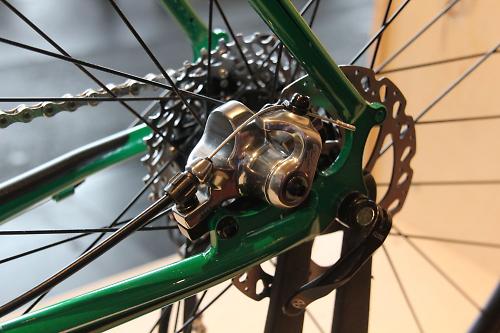 Away from top end carbon mechanical discs are much in evidence though on those sort of all day/all round, commuting/performance bikes we hoped to see. Ooh and there's a greater variety of disc brakes being used with the new Hayes jobs (first seen by us on one of the Rapha Continental bikes at Bespoked) popping up on the Kona Rove. One thing we did note on the Rove is that it comes with a smaller front rotor than you usually see on road discs - okay it is a cross bike, but let's not kid ourselves most of them will be ridden on the road. Maybe the spec will be different in the UK, we'll report back. We'll also be on the look out for more disc specific road wheels.

… and finally (for now) guess who's bike got ridden to a Tour de France win? 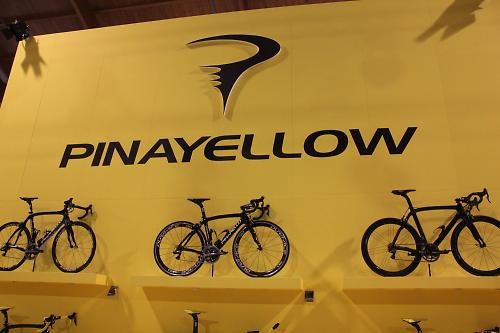