VecchioJo on a disc road bike, surely not.
by VecchioJo

Disc-braked performance road bikes have created a lot of discussion as the Next Big Thing but all that chatter doesn’t seem to have translated into much actual product yet and merely resulted in what seems like a waiting game between bike and brake manufacturers neither wanting to make the leap before the other one does. Colnago, never afraid to try a bit of innovation and then go back to something that works, have decided to mix their DNA into the primordial soup and kick-start the performance road disc evolution with the C59 Disc. 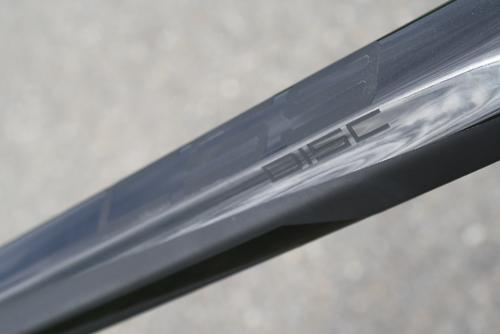 There are obvious benefits to disc brakes on the road, the use of lighter rims since a braking surface can be discarded, with no rim wear, and probably most importantly consistently powerful braking, whatever the weather and rim choice. Minimal servicing is also a bonus. The downsides are weight, with a disc system being heavier than a caliper and the need to strengthen frames to deal with the extra strain discs put on a bike. Plus of course there’s the always entertaining argument as to whether you actually need discs to slow a road bike. 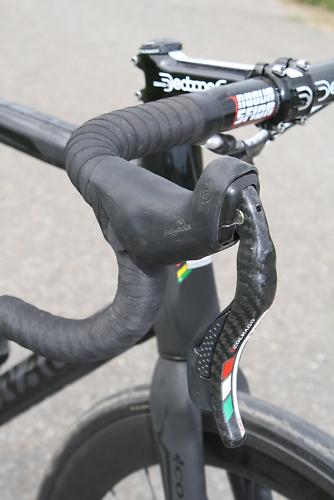 The exciting news is that the discs on the Colnago are fully hydraulic, no primitive cable discs or halfway-house disc converters here while waiting for the big boys to get their hydraulic road act together, and the gears are electronic as well for that full on future feel. The gears are based on an electronic Dura-Ace Di2 system, but it’s plugged into Formula levers which have all the hydraulic brake gubbins hidden inside the lever space freed up from where a mechanical gear shifting mechanism would go and connected to Colnago branded Formula calipers. Colnago have also designed their own wheels for the C59 Disc, the Artemis Disc with disc-specific hubs and full carbon rims. The C59 Disc is based on the popular C59 chassis but Colnago have addressed the problem of the different forces disc brakes put on a frame by designing a completely new fork – chunkier and with the dropouts facing slightly forward to counteract the disc forces on the hub under braking load – and they’ve also beefed up the chain and seat stays. Unfortunately it shows. The C59 Disc is a solid platform. It has to be said that it’s veering towards the big-boned for a performance carbon frame and on the superficial basis of a quick ride out it feels unfortunately sturdy, lacking in either much spring or any subtle ride nuances. 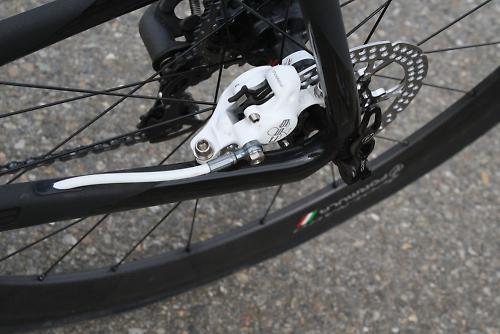 The Di2 electronic shifting using the Formula levers isn’t the best. Ergonomically the smaller shifting paddle is positioned just fine, in the right place for efficient tapping, but the large lever extends a long way down requiring quite a finger stretch when on the hoods, resulting in a lot of mis-shifting as the finger often hits the recessed smaller button instead, even after you’ve got used to where things are. The shifting itself is a bit curate’s egg; it’s great in the front with that pleasing whirring noise, but shifting out back can be push perfect at times and then kinda clunky the next. Which is disappointing. The brakes aren’t as stellar as you think they should be either, as good in the dry as a standard caliper but well bellow-par when compared to a hydraulic disc, with a nasty disc-brake grind too, doubtless they’ll come into their own as soon as it gets wet and gritty though, but as a comparison the TRP Parabox cable-to-disc converter that we played with on the Kinesis Pro6 last year had a significantly smoother feel and a sharper fingertip-only bite. 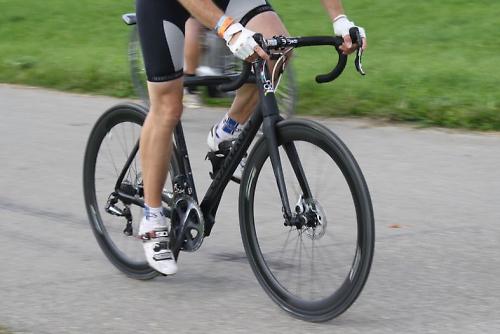 Sadly the Colnago C59 Disc isn’t quite the revelation or revolution it might be. It could be the future, just not quite yet…