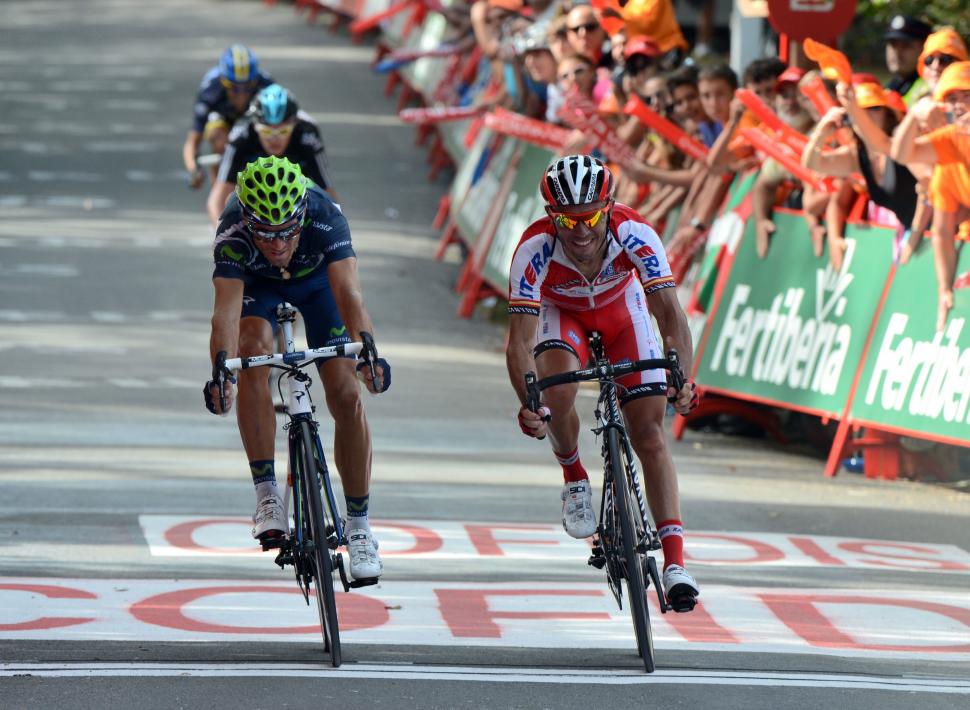 Alejandro Valverde of Movistar is the new leader of the Vuelta after catching Katusha's Joaquin Rodriguez on the line in Eibar to win Stage 3 of the 67th edition of the race. The stage saw a thrilling battle in the closing kilometres with Saxo Bank-Tinkoff Bank's Alberto Contador launching a series of attacks on the first big climb of this year's Vuelta that distanced all but the two riders who contested the win and Team Sky's Chris Froome. It's early days in the race, and there's a lot more climbing to come, but already that quartet look like being the riders who will fight it out for the overall victory, and each has the pedigree to win the red jersey in Madrid.

Contador, racing his first Grand tour since returning from a doping ban, won the Vuelta in his only previous participation in 2008, Valverde succeeding him to the title 12 months later before he himself was banned for two years for his links to Operacion Puerto. Rodriguez and Froome, meanwhile, are the men who fiished second overall in each of the past three Grand Tours - Froome in last year's Vuelta and again in the Tour de France last month, and Rodriguez in May's Giro d'Italia.

The peloton was already strung out as it hit the final climb which began with 7.5 kilometres left, with the last of an eight-strong away group swept up shortly beforehand as Team Sky forced the pace.

Omega Pharma-Quick Step’s Niki Terpstra, sporting the colours of Dutch national champion, briefly managed to get off the front of the bunch but was quickly brought back, and the pace saw a number of riders dropped early on including defending champion Juan Jose Cobo and overnight leader Jonathan Castroviejo, both of Valverde’s Movistar team.

With 5 kilometres left to the finish, all but the final two uphill, Contador launched the first of his six attacks. Each time, Rodriguez and Valverde were able to respond immediately while Froome found himself distanced by several bike lengths on each occasion but managed to get himself back up to the wheels of the men ahead.

Prior to Contador’s final attack, which came in response to a burst of speed from Euskaltel-Euskadi’s Igor Anton, a group of 15 or so riders had reformed at the head of the race, but when the Saxo Bank-Tinkoff Bank rider attacked again, only Rodriguez, Valverde and Froome, after again being briefly distanced, were able to go with him.

With the road heading slightly downhill briefly inside the final couple of kilometres, Rodriguez attacked and seemed destined to take the win, but Valverde was on his wheel and passed him on the line, with Froome rolling over ahead of Contador immediately afterwards.

Early on in the 155km stage that began at the Faustino V vineyard and which saw the Vuelta return to the Basque Country for the second year running after an absence of more than three decades, four riders including BMC Racing’s Philippe Gilbert managed to get away, and they would subsequently be joined by another quartet of riders.

The latter would lead the escapees over the first two of the day’s three categorised climbs ahead of the GC contenders coming to the fore on that final ascent, and takes over the blue and white polka dot jersey as mountains classification leader.