2013 model is lighter and more rigid
by Mat Brett

Bianchi are launching a new version of their Oltre high-end road bike for 2013. The Oltre XR is said to be 20% stiffer than the current version with a 30g weight reduction.

Bianchi are claiming a frame weight of just 895g (+/- 5%) for a 55cm model. The name XR derives from ‘extreme rigidity-to-weight ratio’. 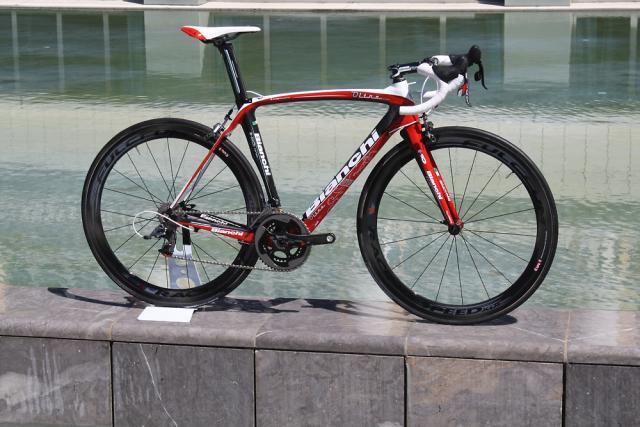 The Italian manufacturer is calling the new version of the design that was first launched three years ago, “The best performance Bianchi road frame ever.”

The key feature that Bianchi emphasised at their press launch in Pau on the second rest day of the Tour de France was the stiffness of the new model to increase efficiency for sprints and accelerations.

The frame is made from UMS 40 and CN 60 ultra high modulus carbon fibre and it features a head tube that tapers from 1 1/8in at the top to 1 1/2in at the bottom to provide front-end rigidity, as did the previous version of the Oltre. The bottom bracket is oversized BB30 standard. Bianchi say that they’ve added the extra rigidity through the huge down tube and the chainstays. They mould reinforcing carbon strips into the structure in key areas like the head tube to increase torsional rigidity. This X-Tex cross weave layer is essentially a lattice structure. Bianchi don’t use this throughout the frame because it would add too much weight, but it’s something they employ where rigidity matters most.

Bianchi also say that their Wrinkleless Moulding Process allows them to avoid any creases inside the carbon tubes that would affect the overall strength of the frame, so they can keep the weight down. Other manufacturers reckon they can achieve the same thing. Bianchi also carry over their Carbon Nano Tube Technology from the previous version of the Oltre. This involves adding what they call nano powder into the frame’s epoxy resin to avoid empty spaces and micro cracks in the cyclindrical structure of the carbon nano tubes. The idea is that this adds toughness and increases the lifetime of the product. The extra strength means Bianchi can use ultra thin seatsays to reduce weight and increase shock absorption.

Although it’s not something we’ve heard Bianchi speak a great deal about in the past, they were keen to emphasize that the Oltre’s tube shapes are aerodynamically efficient, although they didn’t support that with any wind tunnel data. They say that the aero-wing fork legs keep the drag low too. That full-carbon fork weighs just 355g. The seatpost is designed with aerodynamics in mind too. It’s unidirectional carbon fibre and it looks like an integrated design on first glance, although it isn’t – it’s just that the seatpost clamp sits flush with the frame. The head clamp is a made from forged alloy while titanium bolts help keep the complete weight down to 195g It’ll be available in these builds:

The bikes are likely to start becoming available from September although we don't have prices yet. By the way, one of the presenters at the launch was this Italian gent. Any ideas who that is?

It’s Felice Gimondi, one of the true giants of the sport. As well as winning all three Grand Tours (Tour de France, Giro d’Italia, Vuelta a España), he won the World Champs, Milan-San Remo and Paris-Roubaix.

A long-time Bianchi ambassador, he said, “I have celeste in my veins.”

1
Transport boss tells drivers: “If you’re in a car you’re part of the problem”
2
Taxi driver hit cyclist then did factory reset to hide his use of two mobile phones
3
Video: Rider almost crashes through shop window at World Championships
4
Colnago to use blockchain tech on 2022 bikes
5
Journalist who seriously injured cyclist while test-driving McLaren supercar loses appeal against jail sentence
6
BMC brings out carbon frame versions of all-road Roadmachine X
7
Rapha to move to new headquarters in north London
8
“I just didn't feel safe in cycling anymore” – Tony Martin opens up on why he’s retired