The big news in the Wilier 2013 range is the launch of the new Cento 1SR, a road bike that incorporates aerodynamic tube profiles, a 386EVO bottom bracket, and a redesigned head tube.

Ahead of the game, Road.cc first showed you the bike a couple of weeks ago when we spotted it at the Team Lampre hotel before the Grand Départ of the Tour de France. Now we’ve had the chance to get a few more details.

The Cento 1SR is a development on from the Cento 1, a bike that won't be in the 2013 lineup. Evolution, not revolution: that’s what the guys at Wilier are saying. The SR bit doesn’t stand for anything in particular, by the way (like the S in President Ulysses S Grant, trivia fans) – Wilier have simply stuck it on there to indicate a difference from the Cento 1, but they’ve kept the Cento bit because that bike has built up a great reputation over the past four years. The Cento 1SR uses 60 Ton carbon fibre from Mitsubishi. This is the same as Wilier use for their Zero 7 and their TwinBlade (previously known as the TwinFoil) time trial bike. 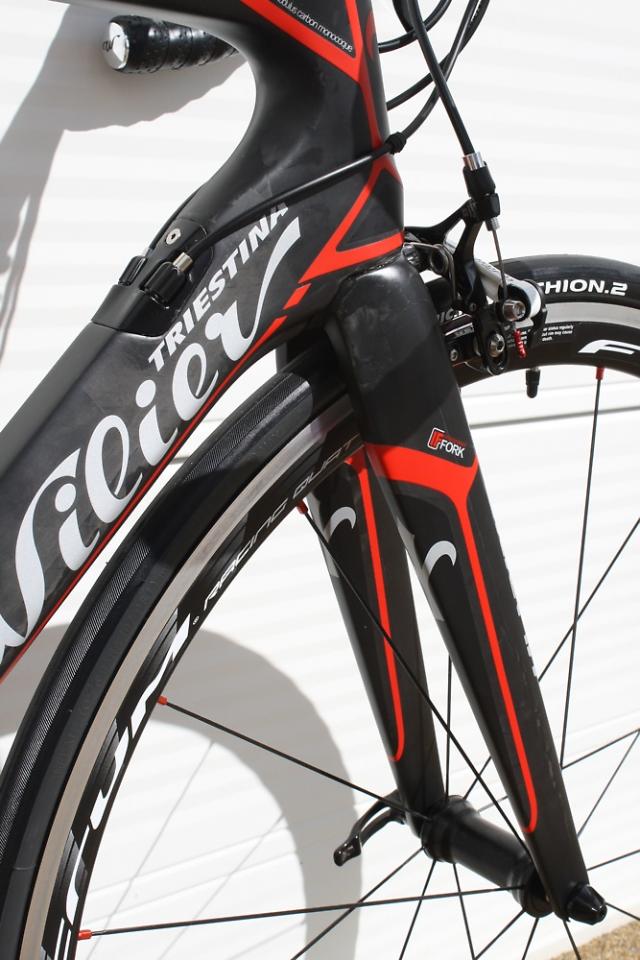 Wilier have gone further in adding material to the underside of the down tube up by the head tube junction, completely changing the shape of the junction. They reckon that this increases the torsional stiffness and, of course, they put a figure on it: the new design is said to be 14% stiffer than before. The fork crown has been designed to blend right into that down tube for smoother airflow and reduced drag.

The fork legs have been designed to be aerodynamic. They’re a Kamm shape with a truncated tail (the back end is chopped off). 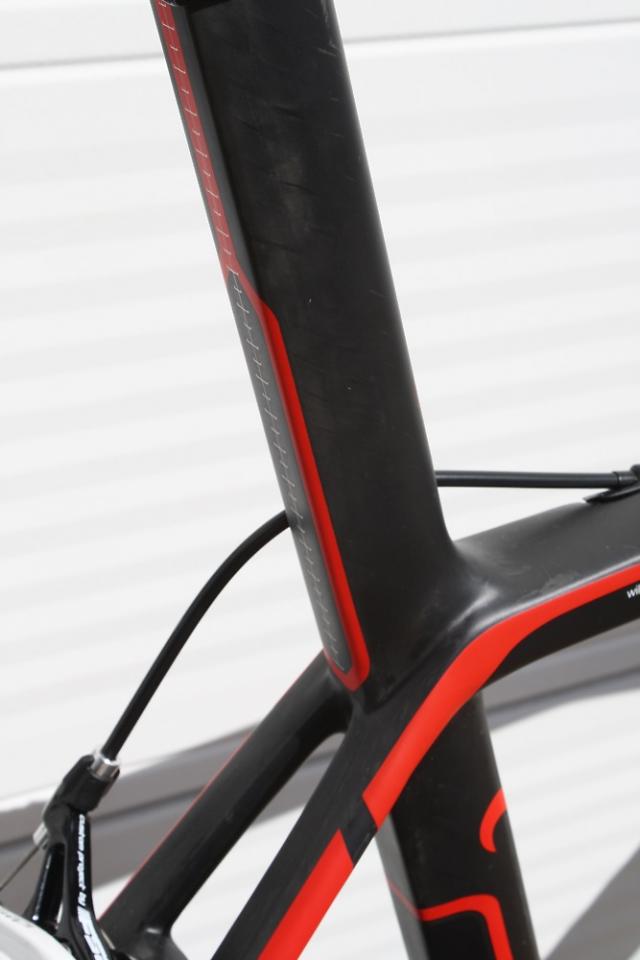 A similar shape is used for the seatmast. You can clearly see how the trailing edge has been squared off. Wilier are firm believers in an integrated seatmast rather than using a standard seat post design. They reckon it gives the best combination of light weight and comfort and their team riders apparently prefer it. On the downside, it can sometimes make transporting a bike difficult and, once cut to the right length, you can only sell your bike on to someone with legs that are the same length or shorter than yours. 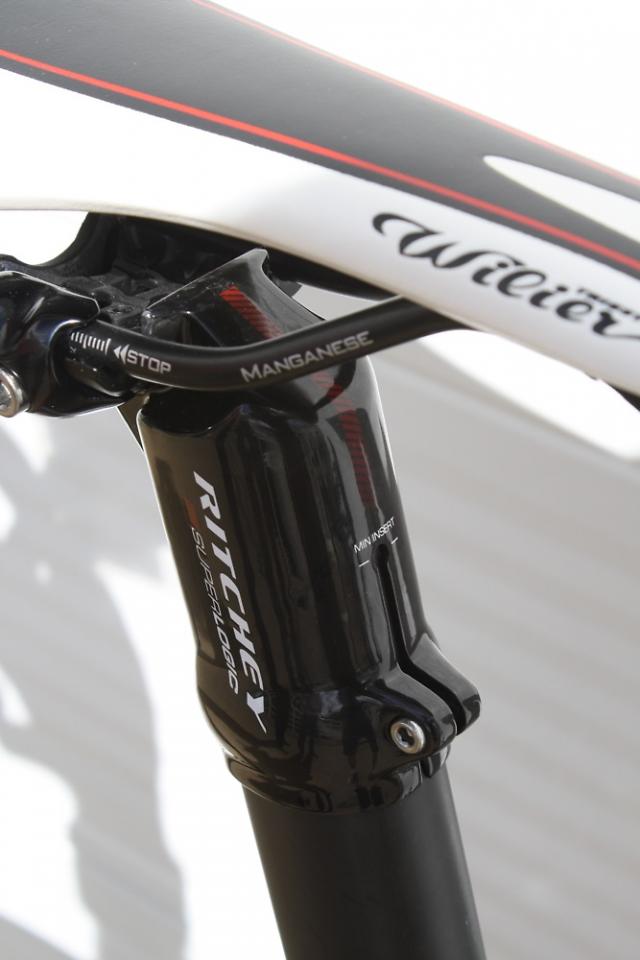 At the moment Wilier are using a custom Ritchey Mast Topper that provides 15mm of adjustability should you swap your saddle or pedals although a 35mm version is on the way. 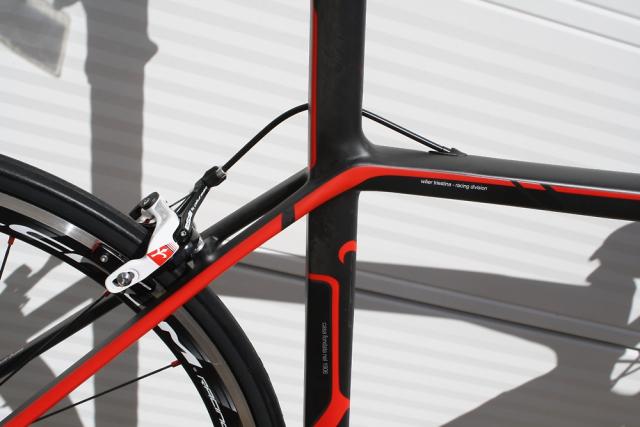 The Cento 1SR’s seatstays are flatter than those of the Cento1 for a little more give at the back of the bike while the chainstays are asymmetric, a feature that has been carried over from the previous design to take account of the differing forces on either side of the bike. The fact that the driveside chainstay is lower should also help avoid chain slap over rough roads.

The bottom bracket is a 386EVO standard which is a design that Wilier introduced last year along with FSA and BH. Buy the frame and you get the adaptors you need to run whatever sort of chainset you like. 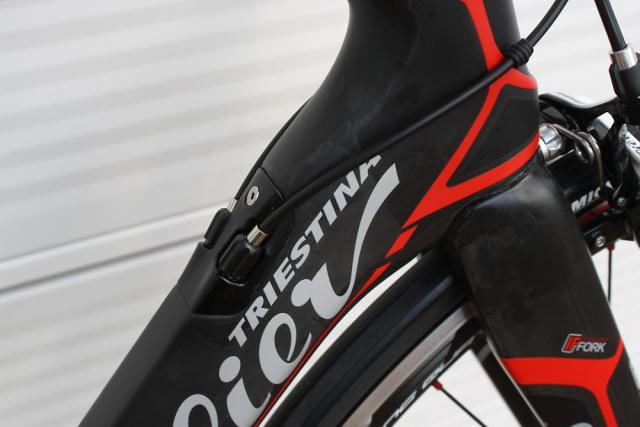 The other new features relate to cable routing. Wilier have come up with a new plate – the Integrated Adjuster Plate –  that fits towards the top end of the down tube to take the gear cables inside the frame. It’s easily removable, leaving a huge hole for you that should make for easy maintenance. Integrated barrel adjusters allow you to fine-tune cable tension on the fly. The system also works for electronic gears although, clearly, you won’t need those barrel adjusters. 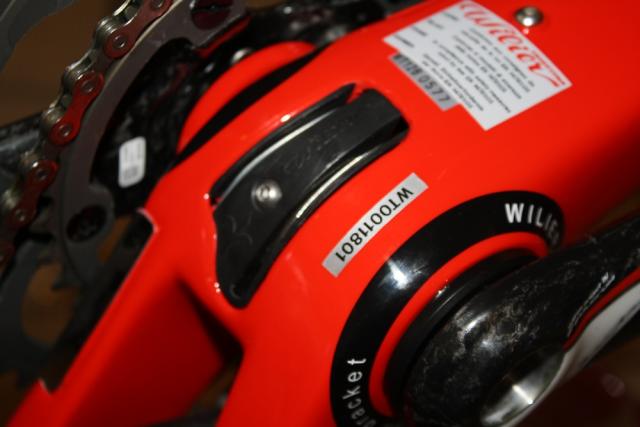 There’s another large cable guide – the 3D integrated Cable Routing Plate –that sits flush with the frame underneath the bottom bracket. The two grooves have different radii to keep the cables as smooth as possible. Again, it’s large and easily removed so threading your cables internally isn’t going to be a problem. 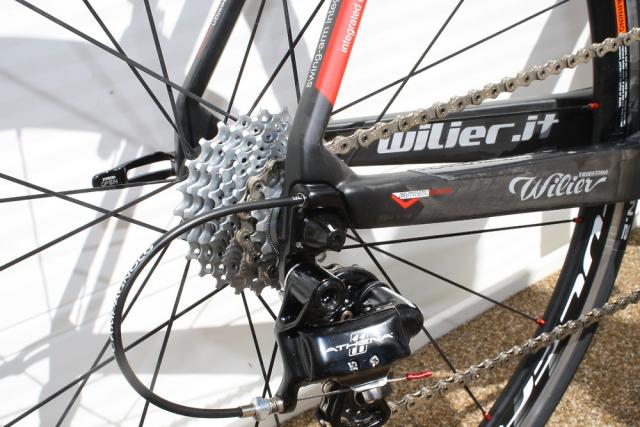 The 3D Derailleur Hanger is new too. Whether you run mechanical or electronic mechs, the gear cable comes out the back there, although you need to have the hanger that’s compatible with your setup. The mechanical version incorporates a cable stop. Positioning the cable stop this close to the rear mech means you only need to run a short length of cable housing. Wilier reckon this, “Keeps the rear derailleur shift cable well tensioned and centered within the stay for friction-free and noise-free movement”.

If you want to go for a complete bike, it’ll be available in this matt black/red finish with a Campagnolo SR Athena build. Those wheels, incidentally (see main pic), are new Fulcrum Racing Quattros with 35mm-deep rims. This bike will retail at £3,499 and should be available almost immediately. Sticking with road bikes, the Zero 7 now comes with bright yellow graphics - the same as the Team Lampre climbers, including Michele Scarponi, have. The lightest ever Wilier frameset will set you back £3,599. This is Wilier’s Cross 105, designed for cyclocross, commuting and anything else that demands a bit of toughness. The frame is double-butted aluminium while the fork has carbon blades with an alloy steerer, and it comes with mudguard eyelets. 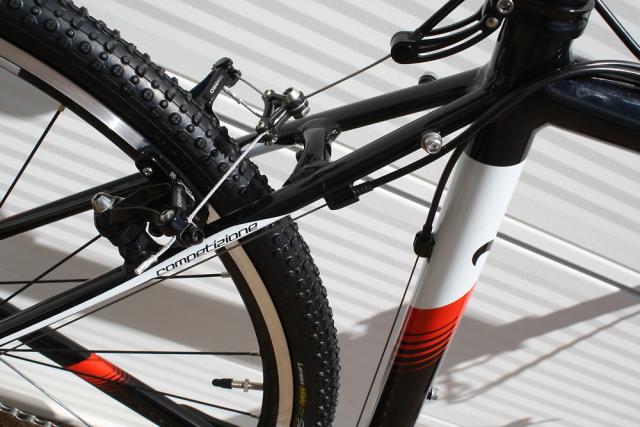 You get rack mounts at the back too. 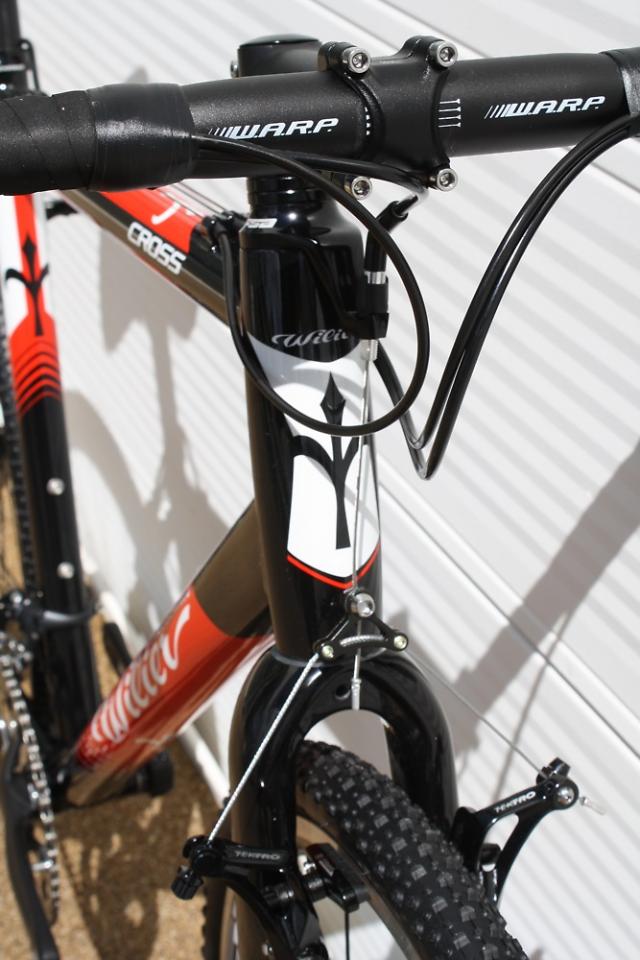 As the name suggests, the groupset is mainly Shimano 105 although the centre-pull brakes are from Tektro and the chainset is from FSA. It’ll cost you £1,250. 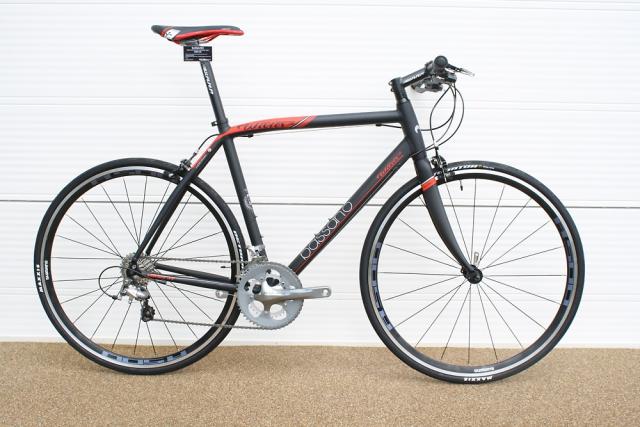 The Bassano is the top model in Wilier’s Weekend range of flat-barred bikes. It gets a new double-butted aluminium with a carbon/alloy fork and, again, it comes with eyelets for mudguards and a rack. The groupset is mostly from Shimano’s Tiagra range and those are Shimano RS10 wheels. It comes in at £999. 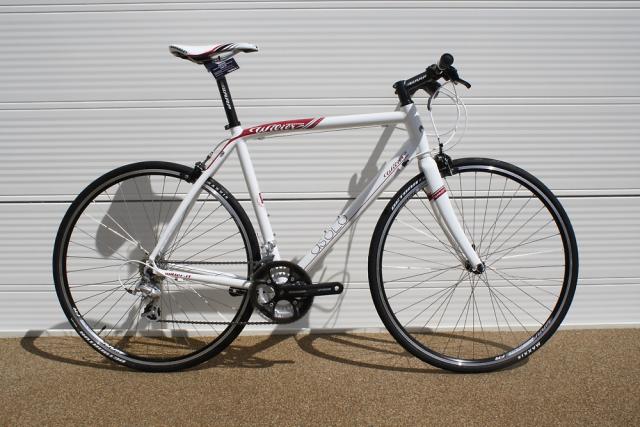 The Asolo is a similar bike that’s also based around a double-butted alloy frame but this time it gets an alloy fork and an 8-speed Shimano-based spec. It’s priced at £645. 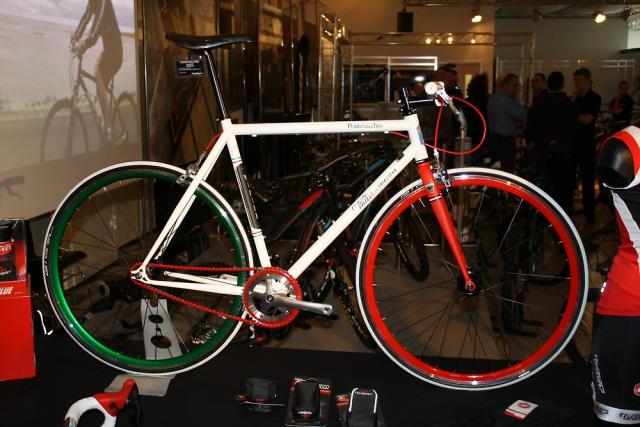 The Pontevecchio commuting/urban bike is now available in an Italian tricolore colour scheme, the white frame matched up with red and green rims plus red fork blades, bars and chain. This model isn’t quite right, though: the front wheel should be the green one with red at the back rather than the other way around. 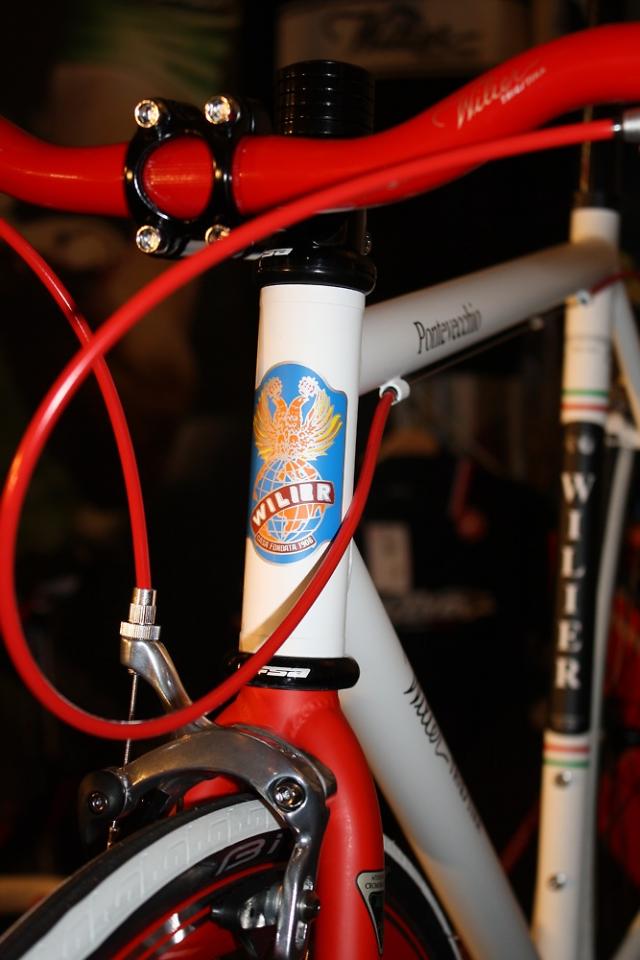 That’s a TIG welded cromo steel frame with a cromo fork, and you can run it either as a fixed or a singlespeed. It costs £575.99.