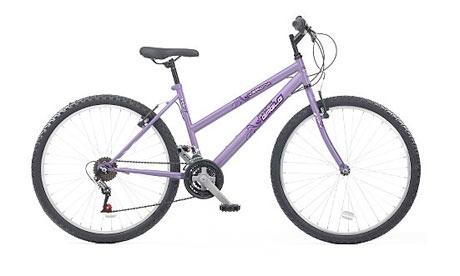 Howls of derision have greeted an ASDA TV advert talking up ‘Britain’s cheapest bike’- showing the bike with its forks the wrong way round.

The £70 British Eagle bike has attracted criticism for its shoddiness and overall lack of user-friendliness, criticism that appears to be justified in light of the advert to promote it.

A red-faced ASDA has been forced to withdraw the advert, saying that the ‘thousands of customers’ that have already bought one have managed to correctly follow the instructions on how to assemble the bike – “unlike us."

But even if the advert has gone, mis-forked bikes are still in existence. The eagle-eyed wife of road.cc user David Pomphret today spotted a British Eagle on display in the ASDA store in Warrington with its forks the wrong way round.

"She went into the store, saw the bike with its forks the wrong way round and got the store manager," he said. "He was going to give me a call but unfortunately I didn't have my phone with me so I don;t know what the explanation was. It's hard to believe though, especially after that advert."

Recently, Dave spotted two people riding GTs bought under the Cycle To Work scheme. The man had a puncture, and when Dave went to help him he noticed the bike's forks were the wrong way round.

"He must have taken it straight out of the box and started to ride it like that," he said. "It defies common sense, but there you are."

Mark Brown, director of the Association of Cycle Traders, noticed that the front forks of the men's bike in the advert faced the wrong way.

"Not even Asda know how to set up their own bikes," said Mr Brown. "This is indicative of the problems which arise from what we in the bike industry call 'flat-pack bikes'. However, unlike flat-pack furniture this could seriously damage your health."

The Asda bikes come in parts, the customers having to attach the pedals, front wheel, handlebars and saddle themselves.

Mr Brown added: "I believe this TV advert has now been pulled but it really goes to show how dangerous it is for these retail giants to move into non-food sectors where they have no expertise.

"Heaven help the poor customer with little or no cycle experience and lacking the wrong tools who tries to build this 'bicycle' for themselves."

The Guardian newspaper’s Helen Pidd recently took out one of the British Eagle bikes out in London, riding it Highgate Hill, Muswell Hill and Crouch Hill.

“Very quickly I wished that British Eagle had concentrated on getting three gears right rather than making 18 substandard ones,” she said. “Every time I went over a speed bump I changed gear; even on the flat there was always an irritating clicking sound which spoiled every ride. On the scale of annoyance, it was rather like being at the cinema and having someone kick the back of your seat all the way though the film.”

She found numerous faults with the bike, including a rear wheel that was out of true, a front wheel ‘that wasn’t round’ and a rear derailleur that hooked onto the axle, rather than bolted straight to the frame, “making it almost impossible to adjust the gears properly.”

Of the TV ad, an ASDA spokeswoman said: “As soon as we spotted the error, we put the brakes on the TV ad and pulled it. Our agency is back-pedalling as we speak and we will be wheeling out the new one tomorrow. Thankfully the thousands of customers that have already bought one have managed to correctly follow the instructions on how to assemble the bike, unlike us."