The e-bike of the future? If it is there's going to be lots of wheelying
by John Stevenson

This week's world's fastest electric bike comes from Audi, whose 50mph self-wheelying prototype has been causing a big buzz on various gadget, car and bike sites and blogs in the last few days.

Presented last week at the Wörthersee Tour event for VW enthusiasts in Austria (VW owns Audi), the machine is “a high-end pedelec for sport, fun and tricks” according to Audi. Quite what sort of stuntman Audi sees as buying a bike that'll do computer-controlled tricks and let you zoom down the road at 50mph, the car-maker doesn't really explain. Audi has certainly teched-up the concept, with a 2.3kW motor (legal maximum for pedal-assist electric bikes in most jurisdictions is about a tenth of that) controlled by an on-board computer. A touch-screen on the top-tube controls riding mode selection, recording of trick sequences and adjustment of various e-bike functions such as electric pedalling assistance and lighting. The display shows speed, distance, battery charge, energy consumption and gradient.

There are five riding modes, from unassisted 'Pure' mode – what you and I would call 'pedalling' – though 'pedelec' assisted pedalling to 'eGrip' electric-only. In pedelec mode, the onboard electronics will let you do 50 mph. Even with 2.3kW of help you're going to struggle to hit that on the flat on a bike with an upright position, and the air resistance at that speed means that all your pedalling is really doing is triggering the motor into 'assisting' you. Or to be more accurate, doing all the work. 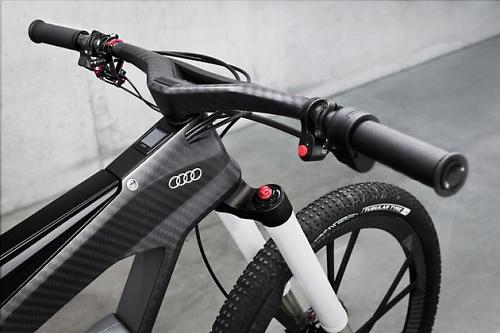 Nifty and stylish as it is this beast is, it's really an electric moped. You're going to need licence, registration and a helmet to use it on the road pretty much anywhere in the world. And then there's the inevitable attention you're going to get from PC Plod if you use either of the two remaining riding modes.

Power Wheelie and Balanced Wheelie modes use the onboard computer to provide Segway-like control of the bike's angle so you can zoom down the road with the front wheel in the air. You either pick an angle in Power Wheelie mode or change it by shifting your weight in a Balanced Wheelie. The 12 year old kid in us wants to have a go, especially as that inner child is still upset that we spent that year learning to factor quadratic equations, a skill arguably even more useless in adulthood than being able to pop a mono. But we're sure Somerset and Avon police would not approve at all.

The dull bike bits of the Wörthersee e-bike are nicely done. The carbon fibre frame is claimed to weigh just 1.6kg, there's an upside-down suspension front fork, hydraulic brakes and gears and the complete bike is claimed to weigh 26 kg including 5kg of 48V, 530 Wh lithium-ion battery that recharges in 2.5 hours and gives a claimed range of 50-70km. 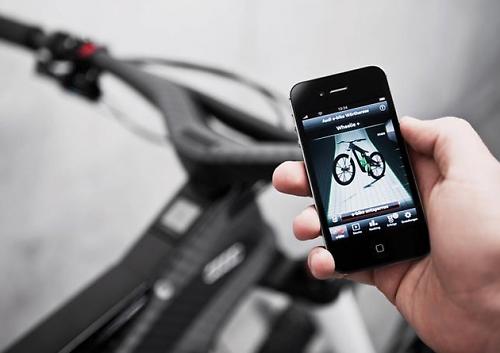 As if all that weren't enough, two final bits of gimmickry: the seat height is continuously adjustable from a handlebar control, even while riding, and there's a smartphone app to control the built-in immobiliser.

There's no word on whether Audi will ever actually sell this thing, though some automotive sites have speculated it'd have a Ducati label if they did, as the group recently bought Ducati.

All the official blah is over at Audi's website.