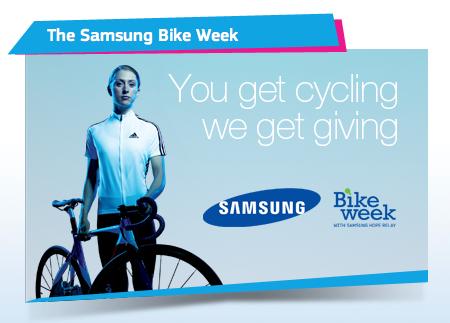 Consumer electronics giant Samsung will be the official sponsor of this year’s Bike Week, which takes place from 16-24 June. The South Korea-based company has also unveiled a smartphone app that ties in with its sponsorship of the Olympic Torch Relay under which the company will donate £1 to charity for each user completes a mile as part of the Samsung Hope Relay initiative.

Trade website BikeBiz says that as a result of the partnership, cyclists can now participate in the virtual relay via the app, originally launched for runners, ad raise money for charities including Kids Company and International Inspiration. Further details can be found on the Samsung Hope Relay section of the company’s website.

One of the features of the app is that you upload a headshot of yourself which is then stuck on the neck of a cartoon avatar – currently, on the iPhone at least, only a runner is available, but a cyclist version is said to be on its way.

Great Britain track cyclist Laura Trott has been signed up as a brand ambassador by the consumer electronics business and will be present at an event during Samsung Bike Week.

The 20-year-old from Hertfordshire, who won two world championship medals in the omnium and team pursuit in Melbourne last month, said:  “Samsung Bike Week will be a great reason for people to get cycling and get fit during Summer.

“I’ve been training hard ahead of the London 2012 Olympic Games, but everyone can get involved in cycling regardless of ability and Samsung Hope Relay brings with it the opportunity to raise money for some incredible charities.”

Bike Week organiser Andre Curtis added: “Partnering with such a high profile organisation like Samsung helps further the profile of mainstream cycling and attract more people to the multitude of events up and down the country during Bike Week.

“These events shows how cycling means a healthier, more convenient and greener lifestyle and - this year – gives cyclists a charitable reason to take part.”

Andy Griffiths, UK managing director of Samsung, commented: “We are delighted to work with Bike Week to support The Samsung Hope Relay initiative, a relay all cyclists can take part in.

“There will be thousands of people who will attend Bike Week events across the UK and we are looking forward to working with the Bike Week team to make each and every Samsung Bike Week event a success and get as many people to take part and cycle for charity.”

The app can be downloaded here, with versions available for Samsung Apps, if you happen to have one of the handsets the company makes, as well as the Apple iPhone and smartphones running the Android operating system. As we said earlier, the cycling specific features don’t appear to have been added yet, at least for the iPhone.

Footballer David Beckham, chef Jamie Oliver and triple jumper Philips Idowu have also been recruited to help spread the message, the trio appearing in a short video, presumably shot before the Bike Week deal and inclusion of cycling on the app was finalised. The video also highlights how users’ pictures and avatars may be used on vehicles and advertising as part of the Olympic Torch Relay itself.