Giro d'Italia 2012: A day to remember in Verona

Phinney's ankle, Garmin's speed and the battle for the Maglia Rosa at the Verona Team Time Trail...
by Philip Gale

Last Wednesday saw the Giro d’Italia return to home soil after a three day starting interlude in Denmark. Verona the home of Romeo and Juliet, was where the race got properly Italian. The riders were not taking in the sights of this historic town - and nor was Phil Gale as he went behind the scenes to get these pictures of that very particular grand tour discipline - the team time trial, over you Phil…

With the overall classification very tight after 3 flat and fast stages in Denmark, the Team Time Trial was not only a demonstration of which teams were the strongest, but a key stage in this year’s race. The circuit was a figure of 8, seeing the riders depart and arrive in the centre of Verona. With no significant hills and long straight roads the weaknesses of climbers would be exploited by the time-trial specialists.

As team mechanics and other staff waited for their riders to arrive, Matt White Director for Orica Green Edge gave his view on the day. “This is an important stage and naturally we will be going flat out. The Giro has started well for us with Gossy getting the stage on Monday, so the pressure is now off and team morale very high. This is our first year, and first Grand Tour. It has started really well.  Even after all of the hard work which we had to put in setting up the team this winter, all the riders and staff are still really motivated to continue to develop and learn. It would be great to take the pink jersey today but I think that is a big ask. Our focus is on stages; I really find it hard to look past Lampre or Liquigas for the overall. The last week is very tough so we will take each stage as it comes.” As the riders arrived, the atmosphere hotted up under the afternoon sun. Team buses became a hive of action as the lines of trainers were used for the final warm up. The streets were filled with the Tifosi - all out to welcome their race, the Giro, back home. Logistically, the move from Denmark to Italy in 48 hours could have been a nightmare. 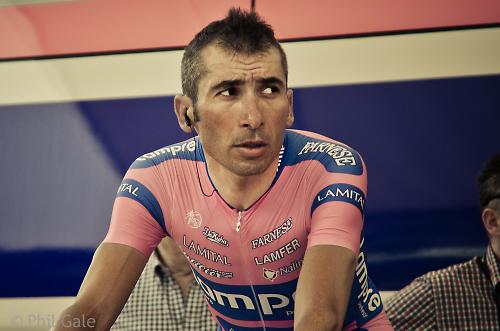 A Lampre rider watches the crowd BMC bikes racked up and waiting… 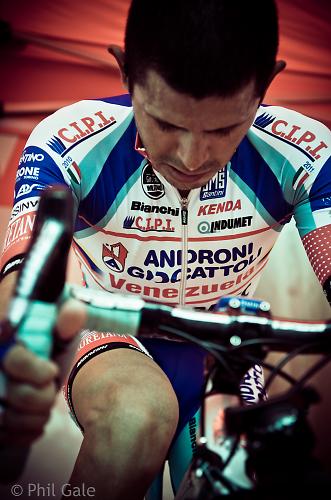 Focusing on the warm-up Net App rider prepares for the maximum effort ahead

Speaking to the head mechanic at Garmin he explained that the European race calendar actually made things easier. “We are racing in Norway and Denmark this week with another team of riders, so the truck and bus we used in Denmark has stayed up there. All of the time-trial bikes were shipped to our hotel in Verona on Saturday where we had a mechanic ready to build them. So all the staff and the riders flew down to meet our second bus and truck whilst the racers’ bikes were driven down by van. There was a slight hiccup - the van broke down in Frankfurt so the bikes were delayed. It caused a little stress, but they ended up arriving late last night.” 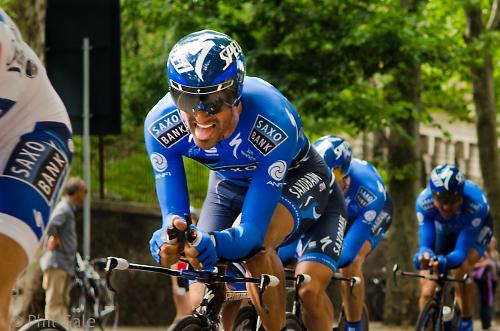 Team after team took their start, running down to the final team, BMC, and the Maglia Rosa of the young American, Taylor Phinney. Before the start he looked his normal relaxed self, coping with the massive amounts of attention from the media and Tifosi. He was still sporting the compression sock on his right ankle after Monday’s crash. The second from last team off, Garmin Barracuda set the bench mark for Phinney and his BMC team-mates, but they could not protect the leader’s jersey. Rolling across the line exhausted and emotional Phinney was swamped by the press just after he took a moment to hug and thank all of his team-mates for their efforts. The work from his team was clear with top riders such as Pinotti, Ballan and Hushovd all exhausted after their efforts. 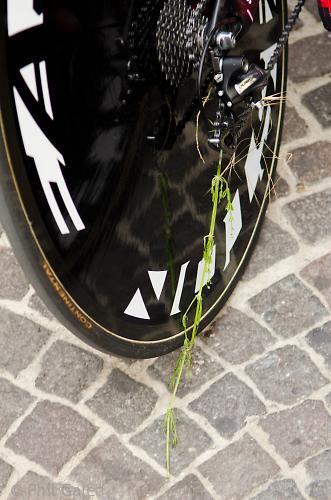 BMC ended up in fifth place on the stage. A near miss where Phinney and a couple of teams mates took to the grass and the swollen ankle cost the team time. Katusha produced the shock ride of the day finishing just five seconds slower than the winning time of Garmin  Baracuda on their new Canyon TT bikes. 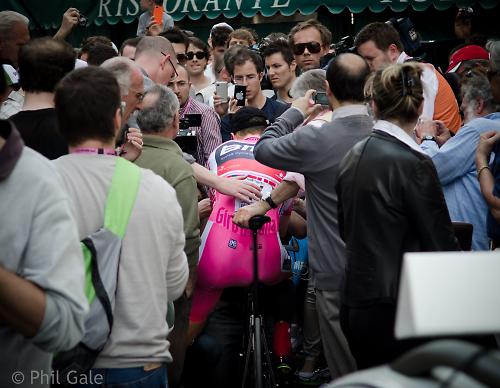 Whilst Garmin Barrcuda not only celebrated the stage victory, but also taking the Maglia Rosa and Maglia Biancha, with the twenty four year old Lithuanian, Ramunas Navardauskas, taking both, Phinney was surrounded by the world’s press, there to document the end of his time “in pink”.

The show rolls on, now heading down into the heart of Italy before a return to the north, for a very tough final week in the high mountains where the real fight for the top step of the podium will take place