Following 30 years of success with the British Heart Foundation London to Brighton Bike Ride the BHF are launching the London to Brighton Night Ride, a moonlight twist on their world famous event. Just like their renowned mid-summer ride the Night Ride starts on Clapham Common and finishes on Brighton seafront with 60 miles of English countryside between the two, not that you’ll actually be seeing too much of it in the dark as the ride starts at midnight on the cusp of the 26th and 27th of May.

Night-riding on the road is nothing new, with audaxes, chain-gangs, events like the Dunwich Dynamo, Exmouth Exodus, and Moonriders, just getting home after work and even a regular social London-to-Brighton night ride, but the BHF Night Ride looks to be the largest organized event; entries are currently at about 4000 and they’re looking forward to reaching 5000 on the day, er, night, and hope to raise about £150k for the BHF and their Mending Broken Hearts Appeal.

road.cc were invited along for a cheeky preview ride and arranged to meet Mark of Pennine Events - who are organizing the ride for the BHF - at Clapham Common on a Thursday evening, which doesn’t sound dodgy at all in lycra, we’d heard stories. We start our ride down to the coast at about 9pm and the battleground roads of London usually strangled with hostile traffic are already remarkably empty, and are going to be even quieter in the miles following the witching-hour start of the actual event. It makes for fast and hassle-free riding through tempting wafts of Indian take-aways, and the streets of Sarf Larnden are pleasant to ride through for once. In no time at all we’re deep into the poshly quiet suburbs and on top of the hill in Coulsdon where the first of three feed-stops will be, you’ll need to keep your strength up for breaching the M25 and venturing into the tyreblack wilderness beyond. The dark route passes through Merstham, Nutfield, Cuckfield, Burgess Hill, Hurstpierpoint, Pyecombe, with the final climb towards dawn at Devils Dyke before heading downhill into Brighton, finishing along the seafront to stop right by the Palace Pier. Once out of the clutches of the London ring-road riders will still have to pass through little pockets of real estate, sneaking invisible through dreams before dropping off the North Downs into the inky depths of the Weald, down sunken roads wrapped tight spooky with trees, just your cocoon of light illuminating your own steep tunnel of fear, or excitement.

If you’ve never ridden country lanes at the other 2 o’clock it’s something different and rather special. Roads that are usually fast angry with traffic and out of bounds for all but the bravest or stupidest cyclist become car deserts in the wee small hours and wide swift bike boulevards instead, and being part of the stream of several thousand cyclists flowing down here in a blinking tide of red lights will be some experience on the night. If you’re feeling trepidatious there’s no need to pack teddy in the saddle-bag for security, the route will be fully signed and marshaled, there are three food stops along the way and a full rider support operation.

Riding blissfully free of traffic means noise is absent, apart from the rare times you’re running parallel or crossing over the motorway with its constant white noise breaking the silent spell, chatting feels rude, the quiet is quieter and all you can hear is the sound of tyre on tarmac and your own breathing, all senses confined within the reach of your light beam. Skirting sleeping mid-Sussex commuter towns with nothing much to look at, the cone of light in front of you used just to avoid the immediate danger of pot-holes rather than for looking at the view, your body relies more on feel than sight and you become obsessively interested in the variety of tarmacs beneath your wheels (well, you do -ed). With little in the way of clues to gauge your progress rough bumpy tarmac stutters and bogs the bike making forward motion seem a sluggish nightmare whilst smooth blacktop feels instantly dreamlike effortless in the dark. There’s a few hundred metres of newly lain tarmac just before you face the final climb over the South Downs that stupid giggly swoosh makes the previous 55 miles all worth it. And because you can’t see black lumps of hills approaching in the dark, or the long drag that’s opening up ahead, gradient is only felt through the legs and not seen with the eyes, so climbs that might have you changing gear, because your eyes tell you to, are done shift-free because your legs can’t see that it’s meant to hurt, and because they are stronger than you might see. Finally even if the weather is inclement, as it was on our preview ride, then it seems to matter less, if the only rain you can see is that which hazes across your light then you don’t get so wet. Maybe. 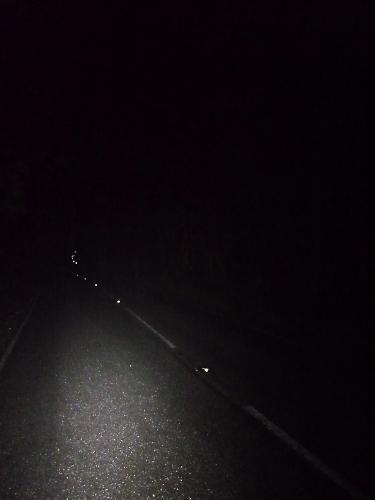 As you pass shadowy dead houses, only the odd glimmer of life peeking yellow through lit windows, unaware of the experience that’s passing in front of their lawns, your mind flits between thinking that this kind of activity is a little odd, and then that it is a perfectly normal thing to do, to pedal like a secret through the countryside. As soon as a lonely car passes and you know that those cocooned inside are wondering what’s going on then you know it’s completely the right thing to do, and loads of fun. To help with the logistics of a point-to-point ride there’s a truck and bus service for you and your bike from Brighton to Clapham for the start or back up at the finish, tickets cost £24 per person. That is off course if you don’t want to keep the night rolling and go clubbing, or pedal back to London. Or head to an all-night diner for tea and a bacon sandwich.

The London to Brighton Night Ride is organised for the BHF by Pennine Events who have an impressive palmares of event management - with the Under and Over the Mersey ride, Beach to Beach 2-day ride, Right to Play Edinburgh to London Cycle, the Liverpool – Chester – Liverpool Bike Ride and British Cyclosportive amongst others, as well as being involved in helping when the Tour de France came to the UK in 2007, so with all that under their belts the inaugural London to Brighton Night Ride promises to be an excellent event. If you want to get a feel of what the night might be like, here’s a video of last year’s Manchester to Blackpool Night Ride…

Registration for the London to Brighton Night Ride costs £31.00 and will close on 11 May, if the event hasn’t reached full capacity before then.