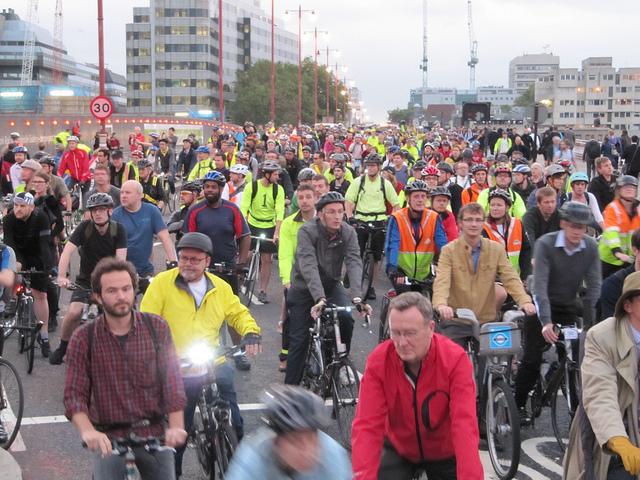 Olympic champions Rebacca Romero and Sir Chris Hoy have taken to Twitter to encourage their followers to take to the streets of London and Edinburgh tomorrow to call for safer roads for cyclists. Thousands are expected to take part in the two events, and a similar ride will also be taking place in the Italian capital, Rome.

While there’s a fun element to the rides – and it has to be said, there are few feelings better than riding in a huge group of cyclists through the middle of a major city, which is an added reason for taking part if you’re undecided – the underlying message of them is to make conditions safer for cyclists, building on existing campaigns as well as The Times’ newspaper’s Cities Fit For Cycling initiative.

The Big Ride, organised by the London Cycling Campaign (LCC), takes place five days ahead of the city’s mayoral elections and calls on candidates to embrace LCC’s Love London, Go Dutch campaign. It starts from Hyde Park at Noon, with riders assembling from 11am onwards at Park Lane at the junction with Upper Brook Street.

In Edinburgh, the Pedal On Parliament ride meets at The Meadows at 2pm for a 3pm start and will head to the Scottish Parliament building at Holyrood, where an eight-point manifesto aimed at helping the Scottish government achieve its target of 10 per cent of all journeys being made by bike by 2020 will be delivered.

In both England and Scotland there will be feeder rides to the central meet-up points, and lists of those rides can be found here for London and by following this link for Edinburgh.

The video below, shot in Amsterdam by the people behind Budapest-based website Hungarian Cycle Chic, gives a flavour of what LCC and other campaigners are seeking to emulate.

While London, admittedly, is a very different city to Amsterdam, what the film does show is that by putting cycling at the centre of transport policy – the Dutch city had a car-centric culture as late as the 1970s – change is possible.

The ride in Rome tomorrow has been organised by the blogger-driven Salvaiciclisti movement, which has the support of national sports daily La Gazzetta dello Sport.