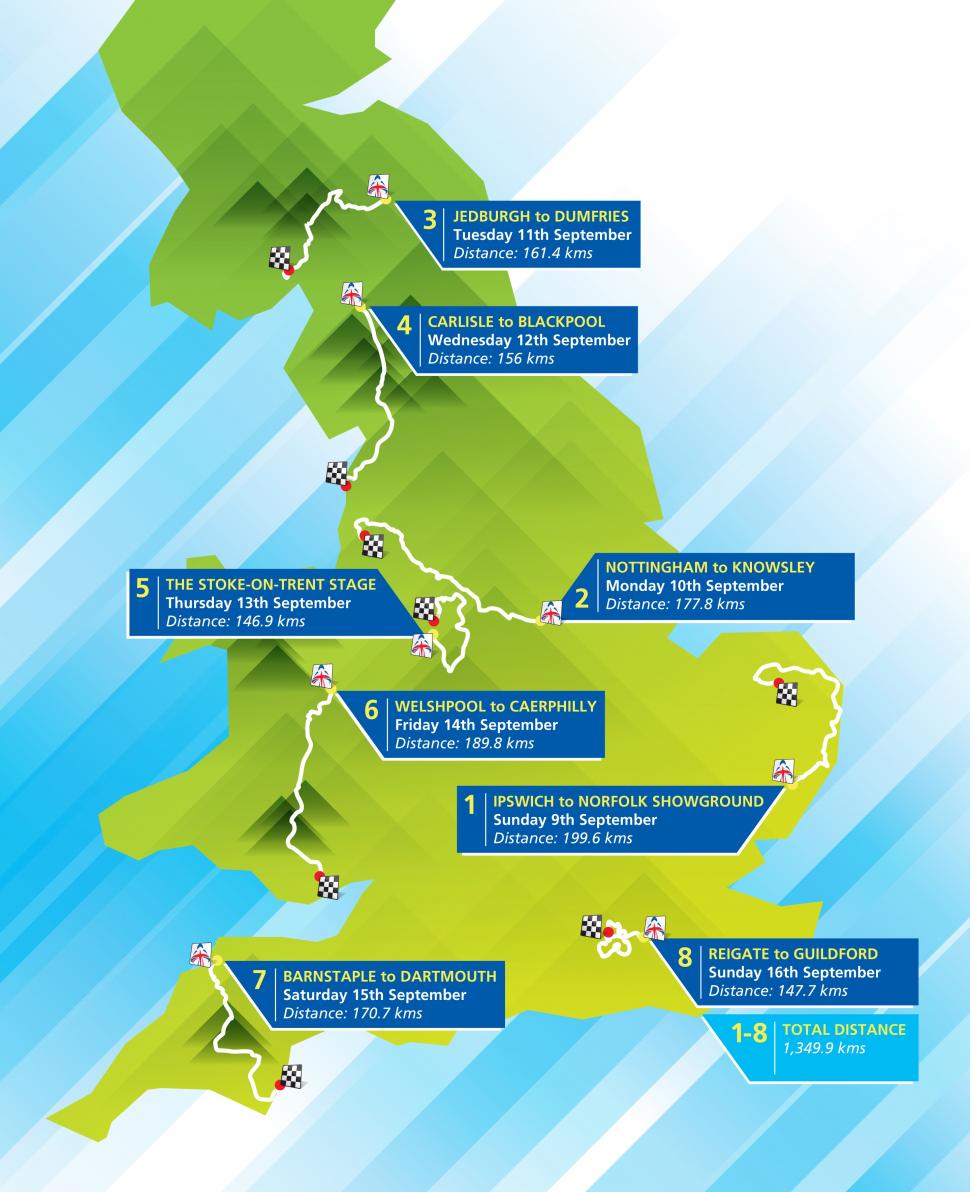 September's race to start in Ipswich, with stages also planned for Scotland and Wales & a tough race promised ...
by Simon_MacMichael

This September’s Tour of Britain will conclude with a stage in Surreyfrom Reigate to Guildford culminating with the riders battling it out over the cobbled climb of the county town's High Street, leaving the identity of the overall winner in doubt till the last day. Billed as the "hardest yet," this year's final stage will be preceded by three other tough stages, including one in Wales that features a double ascent of Caerphilly Mountain.

Full details of the race will be confirmed at the official launch later on today, but ToB organisers are keen to build on the recent run of exciting finishes to the race by putting together a route which means that the race, which runs from 9-16 September, won't be won until the riders tackle those cobbles in Guildford.

“The route of this year’s Tour is certainly our toughest yet, and to coin a phrase a race of two halves," said race director Mick Bennett, alluding to what seems like a sprinter-friendly opening four days before things start getting tougher from the Stoke-on-Trent stage onwards.

"I am sure it will make for some spectacular action this September, and look forward to seeing bigger crowds than ever at the roadside in what is British sport’s biggest year,” he added.

Once again, IG Markets will be sponsoring the gold leader's jersey, and the company's managing director Tim Hughes commented: “We were delighted with the success of The Tour of Britain last year. The large crowds at the side of the road showed how cycling has captured the imagination of this country.

"This year’s Tour is huge opportunity as the first major sporting event in this country after the Olympics and Paralympics to capitalise on the nation’s enthusiasm for sport and for cycling.”

Organisers have also released a promo video showing some of the top action from previous editions of the race.

As last year, the race will visit England, Scotland and Wales, with a mixture of stages familiar from previous years, such as the one that starts and finishes in Stoke-on-Trent, as well as a repeat of last year’s Stage 4, from Welshpool to Caerphilly, where then world champion Thor Hushovd took the stage win for Garmin-Cervelo.

Dumfries and Blackpool both feature as stage finish towns for the second year running; Mark Cavendish won the opening stage in Scotland last year, but the stage to the English seaside resort had to be cancelled as a result of high winds caused by Hurricane Katia.

Once again, there are stages also in the South West and in East Anglia.

This year, there’s no stage in London, where Rabobank’s Lars Boom sealed his overall victory last year on a day that saw a time trial won by Team Sky’s Alex Dowsett followed by a road stage that was notable for being Mark Cavendish’s last victory in an HTC-Highroad jersey, in his final race before becoming world champion.

In part that absence of a stage reflects the fact that the capital will only just have emerged from nearly two months of road closures and other disruption as a result of the Olympic and Paralympic Games.

As usual, the race will see Britain's best domestic teams joined by some of the leading outfits in the sport, with The Daily Telegraph, the Tour of Britain's official media partner, reporting that Sky, Garmin-Barracuda, GreenEdge, Vacansoleil-DCM and Liquigas-Cannondale have already been confirmed as taking part in September.

Last year, the mountain's jersey was won by Jonathon Tiernan-Locke, then with Rapha Condor Sharp and now with one of Britain's other UCI Continental teams, Endura Racing. The Devon cyclist hit the headlines earlier this season with high-profile wins in the Tour of the Mediterranean and the Tour du Haut Var.

The Telegraph speculates that should he repeat that form, Tiernan-Locke could not only become the first home rider to win the Tour of Britain since the race was revived in 2004, but could also potentially secure a slot as a protected rider the following week in the Great Britain line-up in the World Championship road race in the Netherlands. What a story that would be.

Details of each stage are shown below together with comments from the organisers.

The Tour of Britain begins in East Anglia for the first time, with Ipswich hosting the Grand Depart on Sunday 9th September.  Stage One takes The Tour through Suffolk and Norfolk to the finish on the Norfolk Showground outside of Norwich. Stage Two looks to be another for the sprinters, starting from Nottingham Castle and heading across the Peak District National Park to Knowsley on Merseyside for what will be a memorable stage finish at Knowsley Safari Park alongside the elephant enclosure! 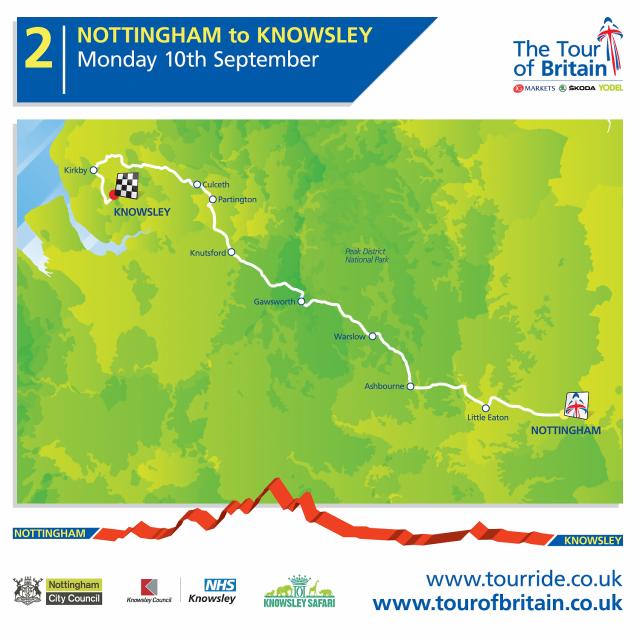 Scotland hosts Stage Three of The Tour on Tuesday 11th September, travelling from Jedburgh in the Scottish Borders to Dumfries, where riders will tackle three circuits of a finish loop in the Dumfries & Galloway countryside. A short hop over the Border sees The Tour of Britain return to Carlisle for the first time since 2005 for the start of Stage Four.  156 kilometres of Cumbrian and Lancastrian roads await, taking the leg through Kendal on its way to a Blackpool Promenade finish in the shadow of Blackpool Tower. Over 2,000 metres of climbing await riders in The Tour on Stage Five, starting from Stoke-on-Trent’s Trentham Estate and finishing once again in the City Centre, on the way tackling Cannock Chase, the Staffordshire Moorlands and Gun Hill. There’ll be no respite on Stage Six on Friday 14th September as riders return to the National Trust’s Powis Castle in Welshpool for a long stage down through mid-Wales to Caerphilly, where riders will tackle the fearsome Caerphilly Mountain twice before the finish outside the world-famous Caerphilly Castle. 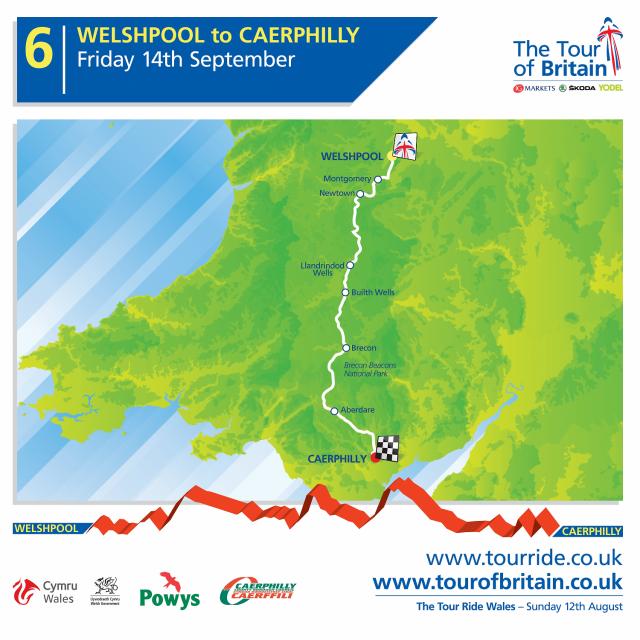 Devon will be The Tour of Britain’s penultimate stage in 2012, with a cross-county stage heading from Barnstaple on the county’s north coast to Dartmouth on the south coast via Dartmoor.  With barely a metre of flat throughout the 170 kilometres the Devon stage is set once again to be decisive in the battle for the ŠKODA King of the Mountains Jersey, as well as the overall battle. Surrey’s final leg will see riders head from Reigate, through the finish line in Guildford and out onto the Surrey Hills.  With the final climb of the 2012 Tour coming in the last 25 kilometres of racing, plus the uphill, cobbled drag to the finish line, spectators can expect the destination of the IG Markets Gold Jersey to remain undecided until the end.