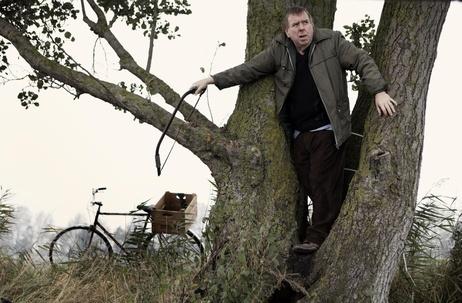 A short film starring actor Timothy Spall as a man whose son was killed while cycling on a country road will have a global audience numbering in the hundreds of millions this summer when it is featured during the opening ceremony of the Olympic Games.

The screenplay of the silent film, called 'BOY,' which is accompanied by a musical score by Alex Heffes, was written by doctor turned actor Prasanna Puwanarajah who received mentoring from actor Richard E Grant as part of British Airways' Great Britons initiative. The airline, a Tier One partner of the London Olympic and Paralympic Games, will also be showing the ten-minute film on flights in the months leading up to the event.

Ever since Beijing staged the most spectacular opening ceremony in Olympic history four years ago, there has been speculation over how the start of the Games in London will be marked. For budgetary reasons alone, the glitzy, cast-of-thousands approach taken in China was never likely to be repeated here, and the tone of the opening ceremony which is being orchestrated by movie director Danny Boyle, aims in his words to repeat "the feeling of inclusivity" adopted by Sydney in 2000.

According to Grant, who was a member of the panel of judges that selected Puwanarajah's screenplay, "Prasanna’s moving story has materialised into a beautiful piece of work that is every bit as impactful as his script. The beauty about ‘BOY’ is that millions of people from all over the world will understand it, because there are no barriers with silent films, and Timothy Spall is utterly superb. It is a touching film that incorporates the London 2012 Games in a wonderful way.”

Olympic Games always produce a number of moments that tug at the heartstrings, and we suspect that 'BOY,' which you can watch below, could provide the first of those this summer. We won't give anything else away, save to say that it features one of the Olympic Park venues that you'll be seeing a lot of come August.

1
MP who opposed pop-up cycle lanes tries an e-bike – and has an epiphany (of sorts)
2
Here's what we want to see from the new Shimano Dura-Ace groupset
3
road.cc Cyber Monday kit sale extravaganza! Take 50% off the price of jerseys, bib shorts, tees and more
4
Corner-cutting motorist who blamed low sun for killing cyclist spared jail
5
Rapha collaborates with Robyn Lynch for new collection, including a £450 upcycled jacket
6
Pregnant cyclist lost baby after hit and run by drunk driver who had previously been spared a ban
7
Chloe Dygert apology for social media conduct “not sufficient” says Rapha
8
Near Miss of the Day 504: A textbook left hook attempt