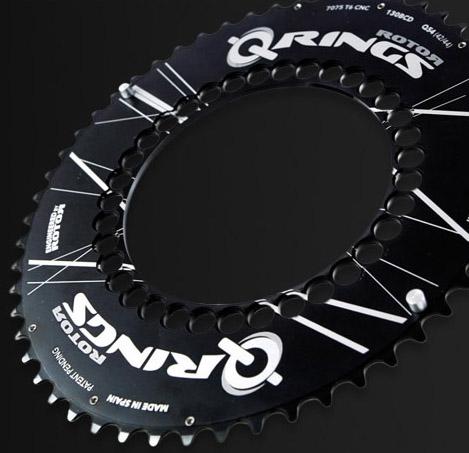 Okay, not just them - a scientific study in the International Journal of Sports Science and Engineering
by dave atkinson

You'll see plenty of Rotor Rings in the pro peloton so there's obviously fit folk out there who believe they work. The latest bit of science we've seen – okay, Rotor sent it to us – does seem to suggest a measurable and statistically significant advantage. Let's look at the test. It's a bit dry (aren't they always) but here's some highlights...

The study dates to August last year and the guinea pigs were eight racing cyclists and triathletes from California Polytechnic State University where the research was conducted by the Kinesiology department. The test was a 1km time trial in laboratory conditions. Not one, in fact, but seven: a practice go, then one effort on round rings followed by four on Rotor Rings and a final one back on a standard dinner plate. Athletes were tested mid season to minimise any effect of increasing cardiovascular performance.

And what did they learn? "Evidence from this study indicated that for these well-trained cyclists and triathletes, performance improved after just one week employing the Rotor Q-Rings," says the report. "Week 5 Post-test (back on circular rings) further demonstrated that positive performance effects were only evident with the Rotor Q-Rings. Furthermore, these improvements were specific and did not transfer to circular rings after four weeks of training, racing, and testing with Rotor Q-Rings."

There's lots of data in the full report (attached below) and the experiment looks to be well designed for its goal. The authors acknowledge that they're by no means the first to have a look at the claimed efficiency/power/speed gains of non-circular rings, with previous studies throwing up a variety of results, sometimes conflicting. But it's an interesting experiment, and worth a read if you like that sort of thing. If you're more academic than us (not hard) we'd love to hear your thoughts on the construction of the experiment, and the findings.