When we sent Simon off to cover Milan-San Remo at the weekend it wasn't just for the coffee and the hobnobbing with the stars, we also asked him to get us some pictures of their bikes prepped and ready for the off in Milan. There's plenty of interesting details to look at in terms of equipment choice and set up. We've spotted some but we're sure you'll spot more, so please chip in if you do.

In this first batch of pics we've got Fabian Cancellara's machine which a few hours later he would propel to second place, Oscar Freire' s Canyon Aeroroad and the Specialized McLaren Venge ridden by Tom Boonen. We've also got Cav's bike (coming soon), cos he was going to win, but we don't have Simon Gerran's Scott Foil cos Simon couldn't find the GreenEdge coach - we now realise he should have looked for it tucked in behind the Radioshack Nissan Trek one.

Looking at the pics, one of the things that leapt out at us is the very different approach to wheels taken by the teams and in some cases by riders in the same team - with all bases covered from super deep section rims through to standard sized ones.

So let's look at the bikes - we're going to do it in the order they finished the race so if you want to look at the Pinarellos first you'd better start scrolling. 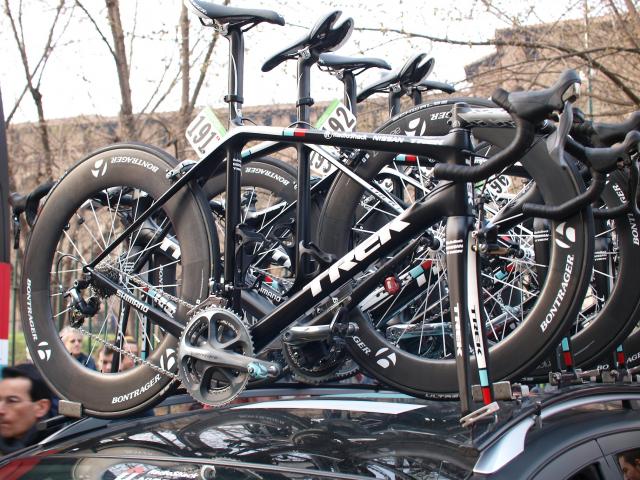 First up is Fabian Cancellara's Trek Madone - no pavé this week so he's not riding the new Trek Domane, it's old faithful this time round: a Madone 6.9 SSL. When it came to wheels Spartacus very much went the deep section route with a set of Bontrager Aeolus 9 D3 Tubular wheels - also the wheel of choice for the other RadioShack bikes we could see.

We asked Simon to point his camera at the pros' pedals for Milan-San Remo… why? Well, it's just a thing we've got. 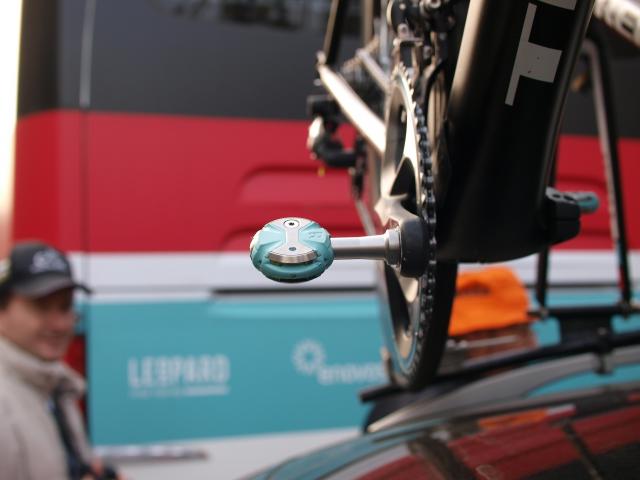 Fabian's pedal of choice were these very natty Speedplay Zeros - which come in a lot of different colours, although we're pretty sure this isn't a standard one. They colour-co-ordinate nicely with the RadioShack coach though, don't they? Worth noting too that Cancellara continues to stick with the mechanical version of Dura Ace. Next it's Oscar Freire's Canyon Aeroad which he piloted to seventh place in San Remo on Saturday. Canyon make great play of the fact that all the bikes they provide to their pros are stock models... except Oscar's according to a press release fired out before the race on Saturday. Mind you, the level of performance enhancing customisation boils down to some subtle World Champ stripes on the inside of the fork legs and the number 3 on it to symbolise the number of World Championships he's won. He's also won three Milan-San Remos. 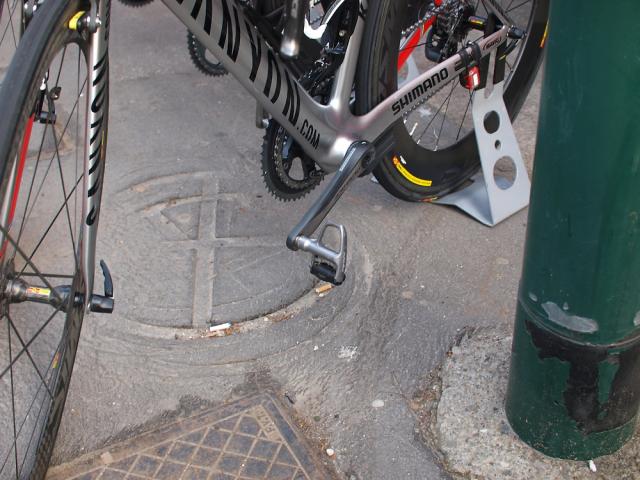 Like RadioShack Nissan Trek, Katusha also ride Shimano-equipped bikes, but unlike Cancellara, Oscar has opted to go the electronic route with Dura Ace Di2. Interestingly, though, his preference for the latest kit doesn't extend to his pedals. Whereas the rest of his teammates look to be on the latest carbon bodied Dura Ace pedals, Freire is using an older alloy bodied version of the pedal. Maybe they're his lucky ones. Oscar has gone his own way when it comes to saddle choice too. While most of his teammates are on Selle Italia SLRs, he's happy to pay the slight weight penalty for a comfort gain by going for the Flite - a lesson perhaps that you get the biggest performance gain from the kit that actually works for you. 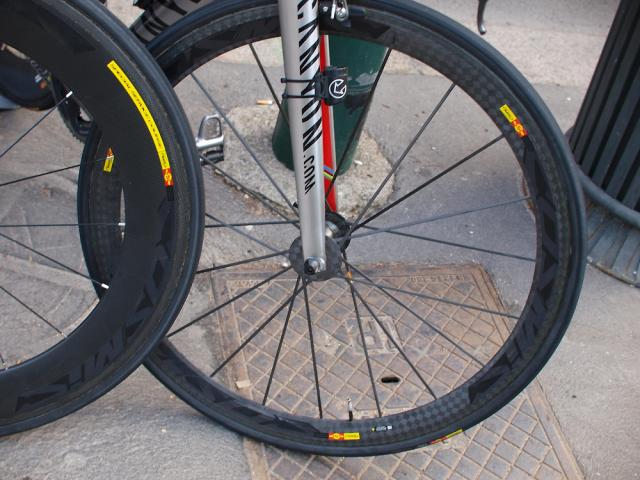 One other thing to note on the Katusha bikes is the variety of rim depths on show, the team giving the Mavic's Cosmic Carbone range a good workout. The bike on the left has standard spokes while Oscar Freire goes with the Cosmic Carbone Ultimate with carbon spokes. 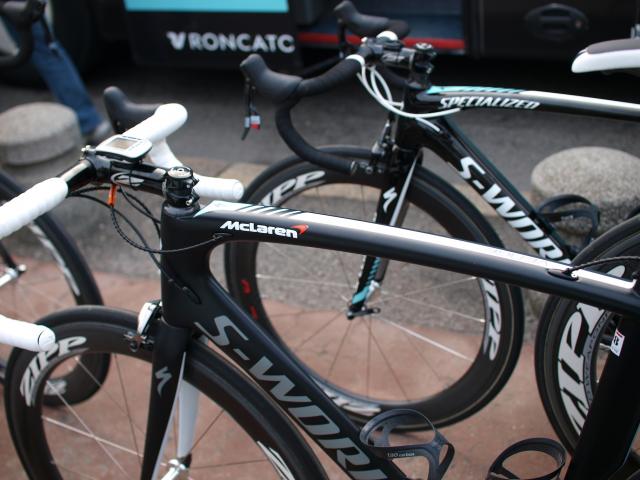 This season Tom Boonen and his Omega Pharma Quick Step team mates are riding Specialized - it was a Maclaren Venge for Torpedo Tom at Milan-San Remo on Saturday. Last year he was on a Merckx while the Omega Pharma component of the team were on Canyons - it's a mechanical merry-go-round in the pro peloton. 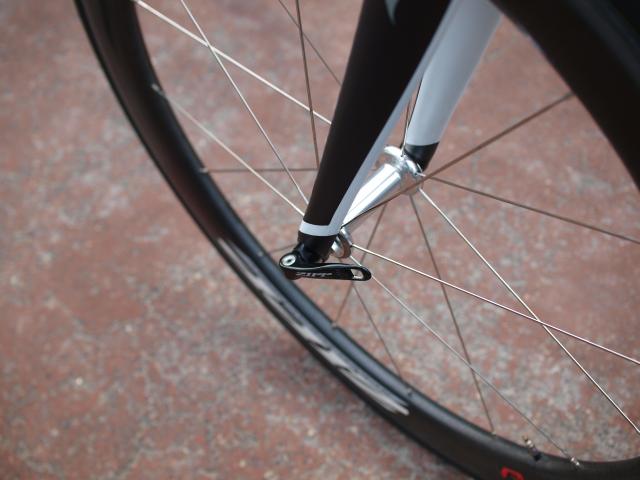 Lots of interesting stuff on Boonen's bike… first off those wheels, Omega Pharma Quick Step use Zipps and judging by the pics Boonen has gone for a 303 up front with a deeper section 404 on the back. Boonen's team are also on SRAM rather than Shimano components - check out the new SRAM Red brakes claimed to be both more powerful and aerodynamically efficient than previous versions. 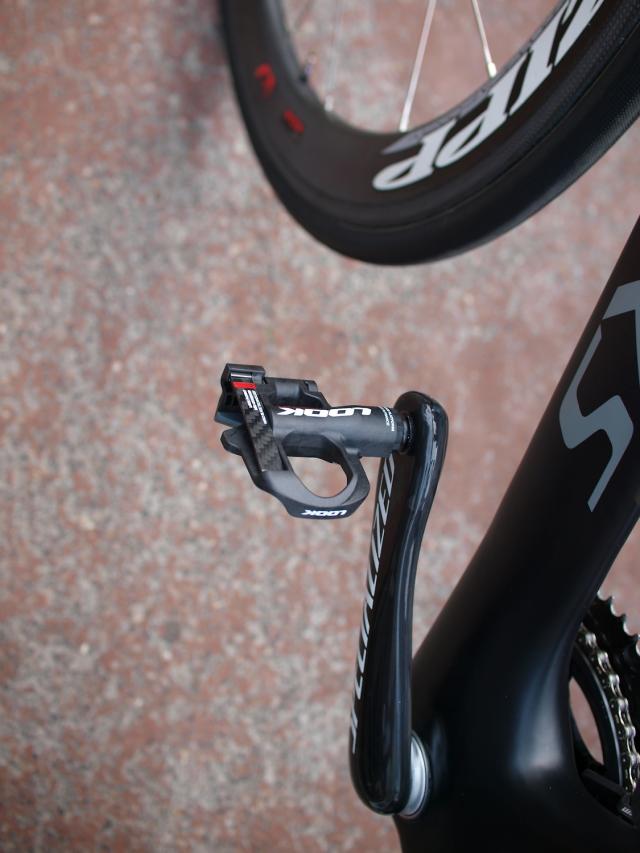 The black anodized aluminium cable housing is a cool understated top end touch - we're pretty sure it's Alligator i-Link cable as reviewed on your caring, sharing Road.cc. Those are Look Carbon Kéo Blade pedals, the carbon strip providing the tension to retain your cleat. The carbon comes in two different types  one with a red strip and one with a yellow strip. The pros all go for red version because the release tension is stronger and you're less likely to come unclipped accidentally when sprinting - not that we've ever unclipped accidentally with the yellow version. Like a lot of the other riders Boonen favours alloy over carbon when it comes to his stem, and is that a Garmin Edge 500 under the Quarq stickers? Looks like it to us. The Garmin device is compatible with the new integrated SRAM Red Quarq Power Meter. 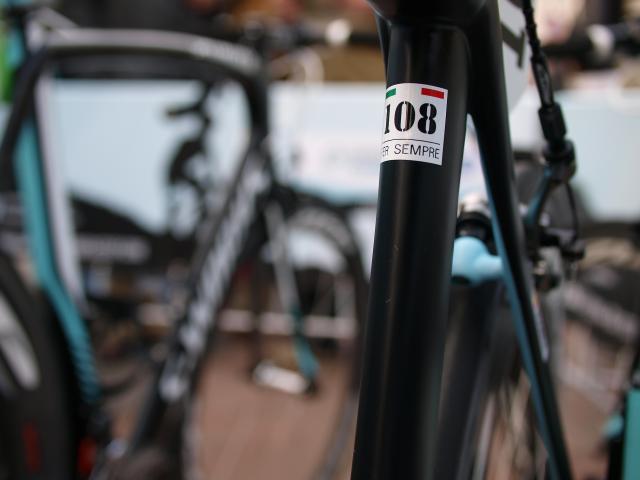 One final, and touching, detail on Boonen's bike is the '108 Sempre' sticker on the seat tube in memory of Wouter Weylandt who was a friend of Boonen's and who rode for Quickstep before moving to Leopard Trek. That's the team he was riding for with race number 108 when he was killed in an accident during last year's Giro d'Italia. 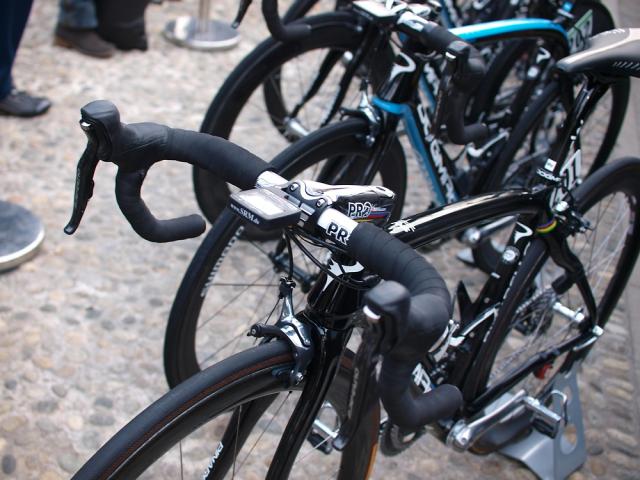 Bringing up the rear it's Cav's Pinarello Dogma 2 (or is it a 3?). It just wasn't his day, but that wasn't for want of the his bike being fully prepped and ready to go. 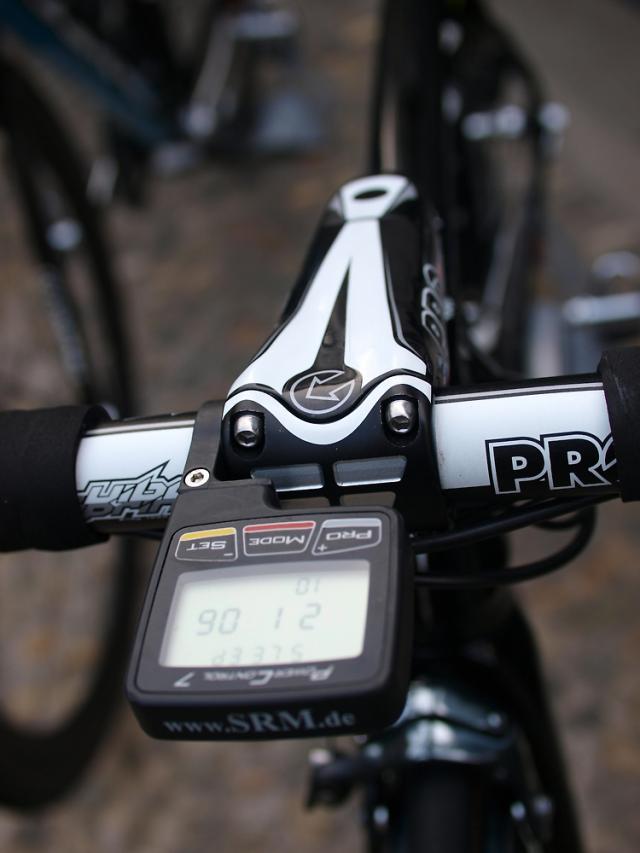 Plenty to look at here. For a start, Cavendish reverses conventional peloton wisdom by opting for a carbon stem matched to an aluminium bar - well they do have his name on them and that stem is a monster piece of work. Made by Shimano's race equipment brand Pro, Cavendish had input into the design and development of the stem which is all carbon and based on an alloy track stem. The Pro Vibe bars on his bike carry Cav's name too - as the guys from Pro told us when they launched a few years back, Cav wanted a super-stiff bar/stem set up that wouldn't flex at all when he put the power down sprinting for the line. Cav's bike is a bit different from his teammates' machines, hence our 3 references. It's all black, no thin blue line for Mr Cavendish (by the way, Simon is convinced the blue line is getting thicker, but that might be his eyesight). On the other hand, Cav does have some very pleasing to the eye World Champ stripes on there. Also, while the rest of the Sky bikes wear their Shimano Di2 batteries beneath the downtube his doesn't appear to, and he is definitely running Di2 you can see the sprinter buttons poking out of the bar tape for a start. We reckon the battery is in the seat tube - that is certainly where they were planning to put it. So what else? Well, there's been a lot of talk that Sky aren't really running Pro wheels but are on re-badged Zipps but the wheels on Sky's MSR bikes are definitely not Zipp and while the rim profile is certainly Zipp-esque there are no dimples… so we're saying Dura Ace C50s or Pro RC50s Finally, we all know that Dave Brailsford is big on the aggregation of marginal gains but surely trimming the excess cable on Cav's brakes that short is taking things a little far? Oh, and finally finally, check out those out of focus pedals - Cav is also a man who likes his SPD-SLs made out of metal.