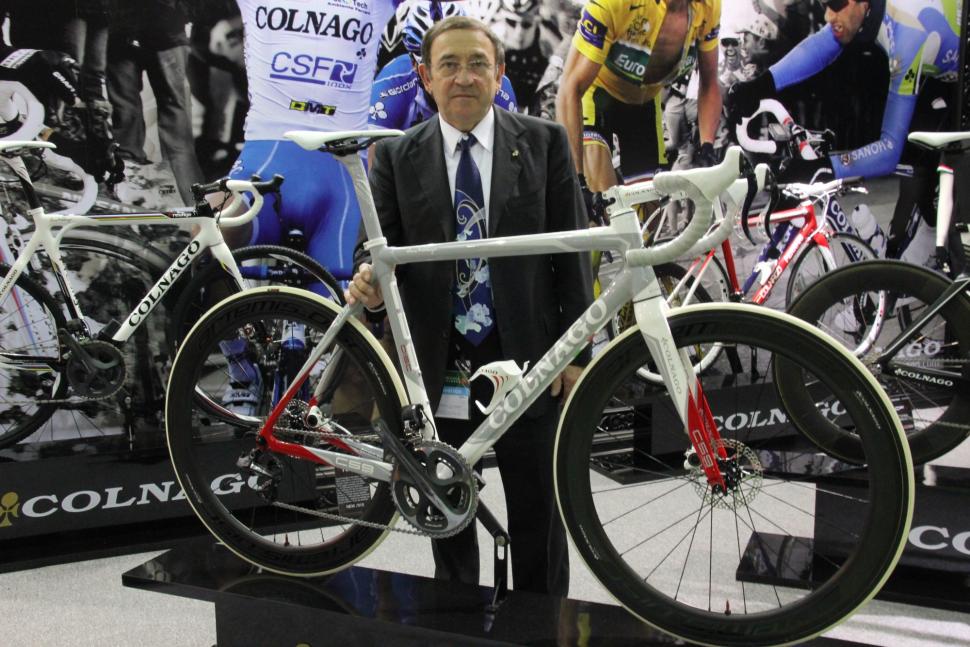 Colnago C59 with discs presented in Taipei by Ernesto Colnago

Industry commentator Carlton Reid says a consensus of component manufacturers are behind the formal adoption of disc brakes on road bikes which would need to be accompanied by a change of the rules for top level competition.

In a story on the UK trade website BikeBiz posted last night our time, Carlton Reid Bikebiz executive editor spoke to manufacturers' reps among them Charles Becker, category manager for road and triathlon at SRAM, who have already expressed their intention to launch disc brakes in various configurations shortly.

"We'll be supplying road discs for testing by the UCI soon," he told Reid. "Regardless of what the UCI decide we'll be producing the kit for the market. For us it's a safety issue as well as a performance issue. Yes, there are compatibility issues for team and neutral support at pro races but that's not an insurmountable problem. I think the UCI will see sense on this one."

Giancarlo Vezzoli, the engineer in charge of the road disc project at Formula, the brakes brand appearing on the Colnago C59 we featured on Wednesday said, "You may be surprised at how quick the UCI makes the right decision. All the brake manufacturers are united. The UCI will see this is a safety decision, nothing to do with politics."

Meanwhile, prior to a press meeting of the World Federation of Sporting Goods Industry (WFSGI) held this morning at the trade show, a representative of one major brake manufacturer represented in the WorldTour peloton told road.cc's technical editor, Mat Brett, "We need to be ready to go with road discs just in case the UCI say at any time that they're going to be road legal. But we also know that, equally, the UCI could say they're not legal."

According to Robbert de Kock, Secretary General of the WFSGI the UCI has yet to receive any road disc brakes to test but once it has done so a decision will be made on whether or not to allow the use of road discs in professional road races.

For many the question of disc brakes on a road brake is an aesthetic one, arguing subjective ugliness as well as an avoidable weight penalty which most commentators agree will amount to a minimum 200 grams.

There are however technical issues to consider, most importantly the one of safety where even their biggest detractors agree that the increased power of disc brakes offer the opportunity for improved control and under all weather conditions.

The biggie is wheel dropouts and quick-releases, where the torque applied to a disc rotor has the effect of trying to twist the hub axle out of its frame or fork dropout. This has been an issue that's bubbled under in the MTB community for many years, with some cases going to court. The issue is addressed on mountain bikes by using thru-axles; basically a redesigned hub where the axle interlocks with the dropout in such a way that it simply cannot be loosened by the braking force.

A 15mm quick release thru-axle on a MTB isn't any slower to release than a standard QR, and has the benefit of stiffening up the front end, so it's probably only a matter of time before we see road bike manufacturers experimenting with similar systems, although it's likely road thru-axles would be smaller, possibly 12mm like an MTB rear hub or maybe even smaller.

Meanwhile, the manufacturers have been testing, as you would hope. Formula's Giancarlo Vezzoli told Bikebiz that the braking system shown on the new Colnago has checked out well, "We did 20 minute mountain descents using just the front brake or just the back brake, locked on all the time, and everything was fine."