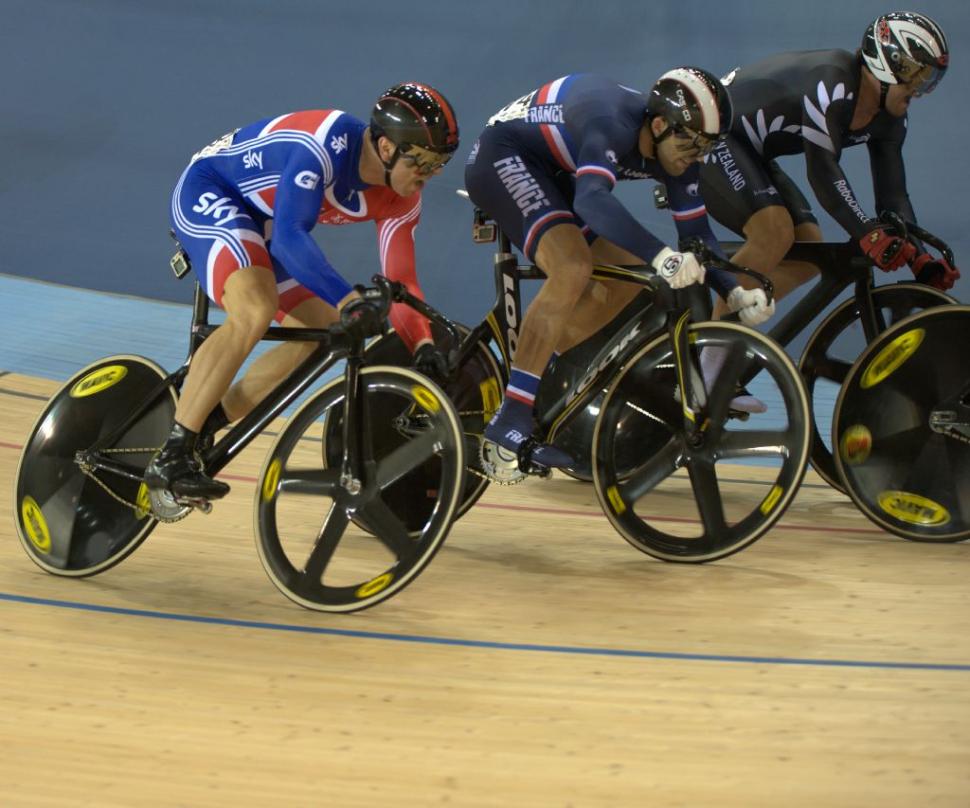 Successful dress rehearsal of Olympic title defence for Scot, but Pendleton misses out on sprint
by Simon_MacMichael

Sir Chris Hoy has picked up Great Britain's third gold medal of London round of the UCI Track World Cup Classics this evening, winning the keirin in the Velodrome where, come August, he hopes to defend his Olympic title. Joanna Rowsell subsequently made it four, adding the individual pursuit to the team version she helped win yesterday.

In the Keirin, Hoy made his move late however, coming from a very long way back to come off the final bend high on the banking with three riders still ahead of him, finishing powerfully to beat Germany's Rene Ender by half a wheel with France's Mickael Bourgain third.

Afterwards, Hoy told the BBC: "I made it very hard for myself there. I sat behind Mickael Bourgain from France and I knew that he was going very well today, he had some very impressive performances earlier on, so I was confident he was going to close the gap on the leaders, and I wass going to try and come around him, but he left it pretty late.

Roared on by another capacity and highly partisan crowd, Hoy added: "With half a lap to go I wasn't sure if I was going to make it, but the crowd, the noise they make when they see you making a move is unbelievable.

"That feeling crossing the line, it's the world cup, a big event but not a massive event, but it feels like a World Championships or even Olympic Games with the support we get here, it's unbelievable."

There was disappointment for another Briton who will defend her Olympic title in London this summer, with Victoria Pendleton losing the individual sprint semi-final to Australia's Anna Meares, the current world champion, who won the third and deciding heat.

The final itself produced another surprise result ahead of next month's World Championships in Melbourne, China's Shuang Guo beat Meares 2-0 to win the gold medal.

In the women's individual pursuit, Rowsell, who had ridden to victory with Dani King and Laura Trott, went off quickly against New Zealand's Alison Shanks, leading by 1.2 second a third of the way into the 3,000 metre race. Shanks would come back in the second half, narrowing the gap to just under half a second, but Rowsell responded to the threat and with the crowd on its feet crossed the line 1.042 ahead of the New Zealander.

Two other events remain to be decided tonight, and one is guaranteed to end with a British rider taking gold or silver with Joanna Rowsell up against New Zealand's Alison Shanks in the final of the women's individual pursuit.

Meanwhile Ben Swift took the scratch race in the Omnium, having earlier finished fourth in the individual pursuit, making him the form rider of the first two events of the second day of the competition. With just the time trial to come, he lay fourth, on the same points, 32, as third placed Zach Bell of Canada.

However Swift's time for the kilo was only the 11th fastest as his earlier efforts took their toll, and he dropped to sixth in the final standings of the competition, which was won convincingly by Juan Estaban Arango of Colombia.