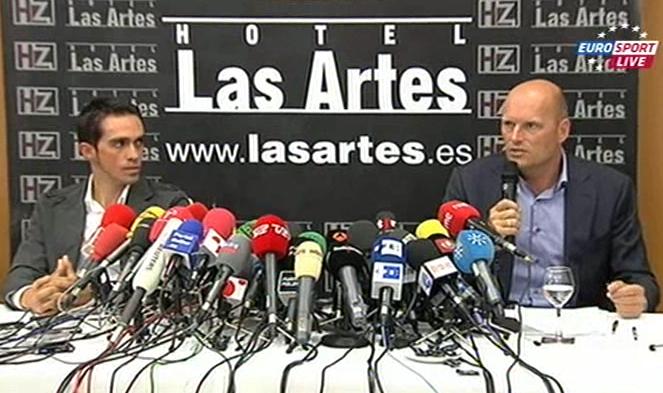 Alberto Contador has refused to rule out an appeal against yesterday’s decision by the Court of Arbitration for Sport (CAS) to ban him for two years as a result of his failed test for clenbuterol in the 2010 Tour de France, which he won while riding with Astana. He was also stripped of that title, plus subsequent results including his 2011 Giro d’Italia victory.

The Spaniard was speaking at a press conference this evening in his home town of Pinto, near Madrid, where he appeared alongside Saxo Bank manager Bjarne Riis. Earlier in the day, however, World Anti-Doping Agency President John Fahey had branded the 29-year-old “a doping cheat, full stop.”

Riis meanwhile said that Contador had Saxo Bank’s’s full support, although he stopped short of confirming that the rider will be back in its jersey when he returns to the sport in August.

Contador was greeted with applause as he entered the room where the press conference, relayed live by Eurosport, had been convened in the Hotel Las Artes in Pinto.

Asked whether he planned to appeal the CAS decision, he replied, “"My lawyers are examining the possibilities and as I have said before we have to fight to the end."

A decision of CAS can be appealed to the Swiss Federal Court, but only on procedural or technical grounds, such as when evidence has been ruled inadmissible, for example, and not on the actual facts of the case. Any appeal must be filed within 30 days of yesterday’s announcement.

"My dreams have collapsed," Contador had begun. "There's not been one morning that I haven't asked myself how I got into this situation. It's been a hard year. I wouldn't wish a year like this on anyone.”

Contador has always insisted that his positive test was due to his having eaten a contaminated steak on the eve of the second rest day of the 2010 Tour, the latter being the day the sample giving rise to his ban was taken.

The CAS rejected that hypothesis, as well as one put forward by WADA that he had undergone an illegal blood transfusion, saying that the more likely explanation for the presence of clenbuterol, a substance for which there is no minimum threshold under anti-doping rules, was “ingestion of a contaminated food supplement.”

"Everybody has been saying that I'm guilty of something that's against my own moral standpoint,” Contador maintained. “My feeling of injustice is terrible. “Throughout all these months I've done everything possible to show that I was innocent. I've written it all down, gone through everything, spent hours and hours answering the questions they've put to me.

"As I said to CAS at the recent hearing, if there's anything more I could have said to show that I'm innocent then tell me what it is.

"I do feel a strange satisfaction in that at least it is all over.,” he continued “I feel it is particularly hard on me because the amount of clenbuterol was so small it would never change my performance."

Thanking those who have stood by him since news he had tested positive for clenbuterol broke at the end of September 2010.

"I want to leave good memories for the fans and have memories of doing my job well," he maintained.

"Every victory I've had hasn't just been mine, it's been for all the people who've enjoyed watching them too. They will decide whether I'm a champion or not.

"I'll continue riding. I'll keep on training, cleanly, as I always have done. Even though my morale is very low now I'll come back as good as I ever was.

"To me it's incredible, almost unbelievable, how much support I've had. I've had nightmare months when I couldn't sleep, months when I wanted to go home rather than ride a bike, so thank you to everyone who has supported me. It's allowed me to go on fighting."

The rider also called for the current system to be reformed, saying: "What happened to me could have happened to anyone. For the sake of everybody the system needs to be improved."

As things stand, Contador will be free to return to the sport on 6th August this year, a fortnight after the Tour de France ends and just days after the time trial at the London Olympics, a race he had hoped to target.

His ban runs retrospectively from 25 January 2011, the date the Spanish federation, the RFEC, said it planned to ban him for 12 months, and also discounts his previous provisional suspension – which in his case was in effect the close season.

The RFEC’s final decision, announced last February following further representation’s on Contador’s behalf, was that he had not committed an offence, and followed statements of support from high-profile figures including then Spanish prime minister José Luis Rodriguez Zapatero.

As UCI president Pat McQuaid had done at the time, WADA’s Fahey today criticised that intervention, although without naming the politician in question.

"I think that governments and politicians ought to stand back and stay above the administration of these issues when it comes to doping in sport," he told Reuters.

"I can say with regard to the Contador decision, it was regrettable that, when the Spanish federation proposed a 12-month penalty, a senior politician made a statement to say that Contador was innocent.

"They then withdrew their proposed 12-month penalty and exonerated him, that effectively meant that WADA had no choice but to appeal.

"Whatever we would have done if the 12 months had stood, I can't say, but after those set of circumstances came, which suggested there was clearly a bias, certainly by the senior politician who made that statement publicly, then we had to appeal”

Riis, who was himself stripped of the 1996 Tour de France title after admitting in 2007 that he had used EPO – organisers ASO subsequently reinstated him as the official winner, albeit with a large asterisk next to his name – began this evening’s press conference in Pinto by outlining the harm he believed the case had done to the sport.

“I think all of us here today can agree this case has been going on for far too long, and it has been harmful to both the world of cycling, to our team and to Alberto Contador,” the Dane explained.

“It’s obvious that putting this case to an end is something that we have been looking forward to for a long time. We look forward to getting back to a point when we can start to have an influence on things again.”

Saxo Bank had signed Contador for the 2011 and 2012 seasons in August 2010, before the former Astana rider had been informed that he had tested positive, and Riis said: “We inherited this case and patiently we had to wait for a final decision.

“All along we did nothing but following the rules, and because Alberto was cleared in the first place [by the RFEC], he was free to ride. Now we have the CAS ruling and as it was the case with the first ruling, we will have to respect it, and we will of course act accordingly to this,” he added.

Riis, whose team according to some risks losing its WorldTour place as a result of being stripped of points accrued by Contador, insisted that the rider, who also faces a multimillion euro fine, had its full support.

“Today I’d like to say that we as a team, supported by all our sponsors, will continue to fully support Alberto, based on the ruling from CAS,” he said.

“The ruling states that it’s very unlikely this has anything to do with conscious cheating. The most likely reason is instead accidental intake of a supplement. This is very important for us, so our trust in Alberto is still 100 per cent intact,” he concluded.