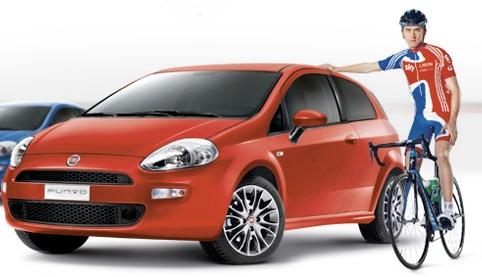 Initiative ties in with Italian marque's sponsorship of governing body...
by Simon_MacMichael

Olympic champion cyclist and Team Sky star Geraint Thomas has been recruited, along with other GB riders, to front a campaign called ‘Let’s clear the air’ that is to be launched jointly by British Cycling and car maker Fiat, its official vehicle supplier.

According to the trade website BikeBiz, the campaign aims to "to improve relations between cyclists and motorists on the road." It is timed to run alongside the relaunch of the Fiat Punto. One model in the new range, the GBT (pictured) comes with a year’s membership of British Cycling thrown in.

Thomas, who is alternating between the road and the track in the build-up to the London Olympics, where he aims to retain the team pursuit gold medal he helped Great Britain win at Beijing four years ago, spoke about his involvement in the initiative in a column for the newspaper Metro last week.

“Off the bike I’ve been working on a campaign with Fiat trying to improve relations between cyclists and motorists on the road – to prove we’re not guys in Lycra who don’t pay taxes,” he said – although BikeBiz points out that Fiat too was until recently of incorporating the incorrect term ‘road tax’ in its print adverts.

Thomas added: “Most cyclists own cars too, so we all need to try and get along!” In fact, market research has shown that regular cyclists are more likely than average to have more than one car in their household, while according to the Department for Transport’s National Travel Survey, 83 per cent of cyclists own a car, compared to 82 per cent of non-cyclists.

Fiat’s UK website has a page dedicated to its backing of the governing body, where it says it is “lining up some exclusive offers for British Cycling members.” As yet, there’s no details of what those might be, although members are encouraged to sign up for updates.

In the past, Fiat was the official vehicle supplier to both the Tour de France and the Giro d’Italia – which last year began in the Italian marque’s home city of Turin – a role now undertaken by Volkswagen-owned Skoda.

News of Fiat and British Cycling’s joint campaign comes in the same week as the US arm of German car manufacturer Volkswagen unveiled a partnership with national cycling advocacy group, Bikes Belong.