Tour Series Round 7: The sprint is on ©www.joolzedymond.com

The top three teams divided the spoils last night at round seven of the Tour Series: Team Halfords Bikehut finally moved to the top of the all-important overall Team competition while a rejuvenated Rapha-Condor squad took the Team win and on home turf Candi TV – Marshall Pasta took the individual win through Russell Downing.

Halfords now lead the Candi TV team by 1 point in the overall competition but a mere three points covers the top four teams so this first series looks like it will go right to the wire.

Stoke-on-Trent came out in force to welcome the Tour Series as the bright evening sunshine showed off all that is great about this form of bike racing. The huge crowd enthusiastically banged the boards from the moment the flag was dropped by the Mayor of Stoke-on-Trent until Downing crossed the line to a rapturous welcome. The Candi TV rider had ear-marked this round of the Tour Series and didn’t disappoint the team's fans, as he won a bunch sprint by the narrowest of margins.

Before the off the consensus was that the tight, technical and relatively hilly Stoke circuit would suit the lighter, punchier riders, and in particular the Candi TV-Marshalls Pasta team. However as Rob Hayles and the Halfords squad stretched their legs on the front after five laps it was clear that the bigger guys in the Tour Series field had not read the script.

As the first sprint of the night passed – taken easily by Rapha-Condor man Chris Newton – a group of five riders put the hammer down and caused a considerable split in the group, which was already beginning to thin after 15 mins. A perky and fresh-back-from-Canada Rapha-man Kristian House led the field through, as the the break was quickly pulled back into order.

After all of the talk of the big four Teams at the Tour Series is was good to see the likes of www.cyclingbargains.com and Sigma Sport mixing it heavily at the front, however Rapha-Condor seemed to have the bit between their teeth for this one, and an attack by James Cambridge was closed down by that man Kristian House. Candi TV, Halfords and Madison were playing a cagey game at this point as the stakes become higher and higher in this 10-round Series

Sprint two signaled another raising of the already relentless speed, and Dean Downing took the second win of the night for Rapha-Condor boys. The pace was obviously proving too much for some of the riders as small splinter groups were struggling to hold the back of the main group after 35 minutes of the hour had elapsed.

This racing was very different from the two previous rounds which saw very early breaks of four riders escaping and successfully holding the advantage to the finish, and the eyeballing of the leading teams meant that this one was going to stay together right until the final laps.

Sprint three went to Rapha-Condor, as Chris Newton went for the long one and rolled across the line with 50 metres to spare. This attack signaled a move to the front of the Madison and Candi TV teams, with Madison’s Jerome Janssen chasing Newton with Candi TV man Russell Downing attached to his back wheel. As they scooped up the Rapha rider, Graham Briggs dragged the remaining 35 riders through the start/finish area as the clock ticked towards 50 minutes.

If nothing else tonight’s round showed that the Tour Series is a team event, and with five laps left it was great to see a small break of six riders containing riders from the Sigma Sport, Sport Beans, Halfords, Endura, Corley Cycles and Rapha-Condor teams. The finish was to be a multiple rider, and multiple team affair.

With two laps to go Evan Oliphant tried desperately to ride out to the finish, however with four Halfords riders on the front of the chasing group this was always going to be a big ask. Candi TV who have been the team compeition leaders for th last three rounds left it until the final 2 km to show their hand but they were ready to make a fight of it as the whole field rounded the last corner.

200m to go and Russell Downing, Ian Wilkinson (Halfords Bikehut) and Dean Downing (Rapha Condor) were spread across the road, but the Candi TV- Marshalls Pasta rider was not to be denied, as he took the win in front of the ‘home’ crowd of the Potteries based squad.

Team Halfords Bikehut hold on to the slenderest of leads as the race now moves south on Thursday (18 June) to the historic Roman city of Colchester for round eight of the Tour Series. 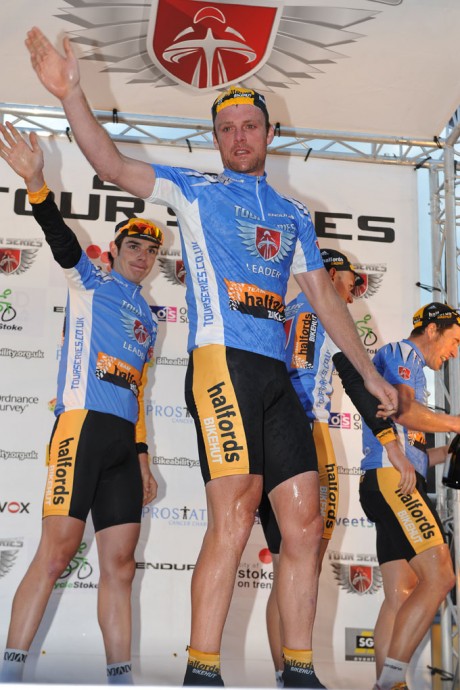