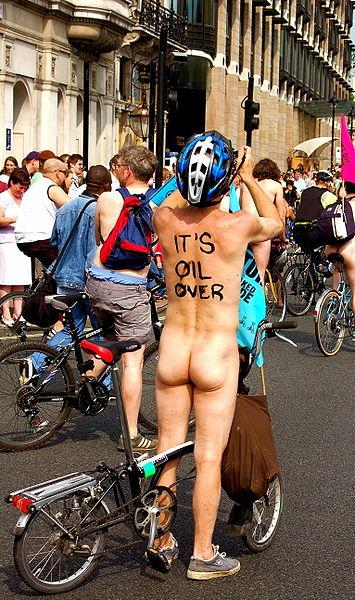 Thousands bare all for bike ride in the buff

Naked truth told about cycling and the environment
by Tom Henry

Good weather and concern for the planet combined to bring thousands of people out across the UK to take part in the World Naked Bike Ride event.

The event, organised to raise awareness of oil dependency and cycling issues, saw riders come out in various stages of undress, many body-painted and with decorated bikes.

More than 1,000 people stripped off in London to ride a six-mile route from Hyde Park Corner, past the Houses of Parliament and to the West End. The police stopped traffic to let the cyclists travel safely through normally-busy streets and the procession was cheered on by hundreds of tourists and shoppers.

Organiser Jesse Schust said: "It's us taking back the streets with out bodies and making ourselves visible so the politicians can't ignore our demands.

"This is naked because we want to show the vulnerability of the cyclist, the cyclist in the street now is no safer than if they had absolutely no clothing on, and we're showing that by going out onto the streets without our clothes."

In Brighton, around 700 people took part in the event, almost doubling the size of last year’s ride. Coordinator Duncan Blinkhorn said the atmosphere at the seaside city was ‘carnivalesque’ with sound systems, live bands and performances and many of the riders carrying flags with slogans on them.

“It’s a fantastic way of getting the message across about oil dependency and cycling, plus a few other issues,” he said, “and we were very pleased at the levels of support we got. It’s a very liberating experience, riding naked through your own city! There is a real sense of freedom when you do it, and it’s just a different way of being for a day.”

But the tolerance of police in London and Brighton was in contrast to their counterparts in Manchester, who asked the 100 cyclists to cover up.

Rider and organiser Sean Fitton said: "When we got to Portland Street officers stopped us, causing a major back-up of traffic.

"There had never been any agreement that we would cover up. That wouldn't be a naked bike ride then would it?

"The officers finally backed down when they realised several riders had no clothing with them, so they let us go telling those without clothes to ride in the middle of the others where no-one would be able to see them."

Organisers say previous naked bike rides in the city have been completed without a problem, and on two previous occasions the riders were given a police escort.

A police spokesman said: "We were informed a group of cyclists were riding round the city naked. Police officers spoke to them and they dressed and dispersed. No arrests were made."

* Did you take part in the event this year? Tell us about it at road.cc