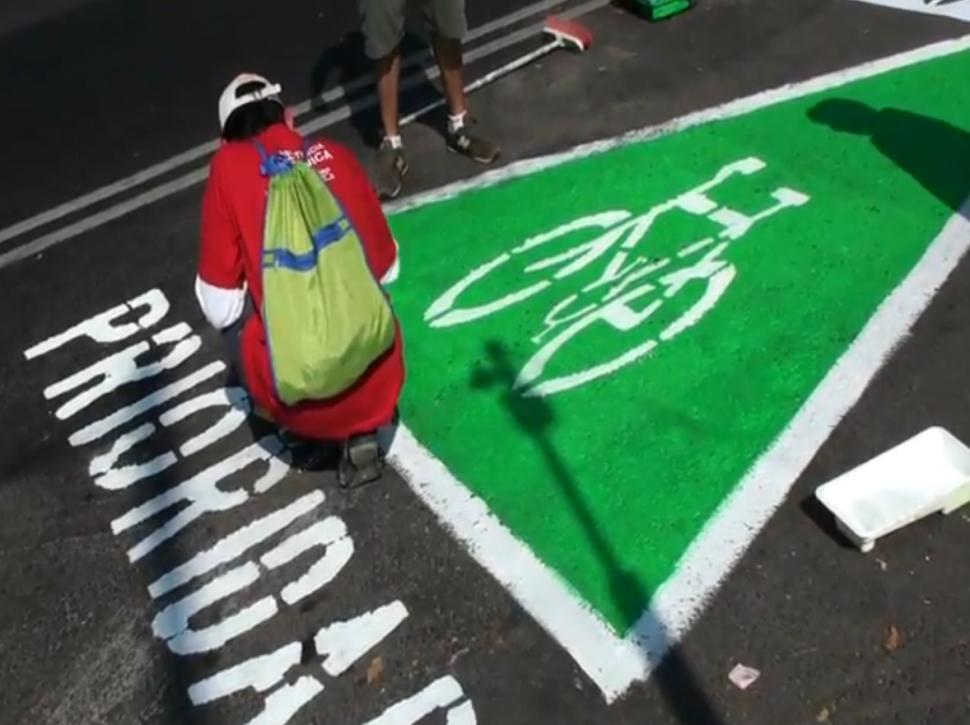 Environmental activists in Mexico City, frustrated by the lack of progress made by the city’s government, have taken matters into their own hands by creating their own 5 kilometre bike lane that takes cyclists into the heart of the country’s capital, finishing outside the city’s Congressional Hall.

The initiative, which represents a striking example of how social media can bring people together in pursuit of a common cause, comes at a time when local politicians housed within that building are debating the future of transport in the city, which is home to nearly 9 million people.

It also coincides with a national campaign in which a number of groups throughout the country have united to call for 5 per cent of transport budgets to be set aside for walking and cycling.

The so-called ‘Wikicarril’ (‘Wikilane’ in English) took eight hours to paint, its name reflecting the collaborative approach that harnessed social media channels to fund and paint it. It includes three metre long green triangles at key points emphasising that cyclists have priority, as well as roadside signage along the route.

Necessary equipment such as rollers and paint was paid for through Mexican crowdsourcing website, Fondeadora, while some of the volunteers who helped work on the lane’s installation were recruited through Facebook and Twitter.

Jimena Veloz, one of the activists behind Wikicarril, which was devised by a number of organisations working together, explained the background to it on the blog This Big City, where you can also find photos of it being installed.

“Mexico City’s government pledged in 2007 that it would build 300km of bike lanes around the city by 2012,” explained Veloz.

“However, the city still only has 22.2 km because most money is allocated to car infrastructure, leaving aside non-motorized mobility.

“That’s why the Institute for Transportation and Development Policy and the National Network for Urban Cycling (BiciRed) launched a campaign called ‘5% for bicycles and pedestrians’, which asks national legislators to assign at least that percentage of the transportation budget to non-motorized infrastructure.

“To promote that campaign and pressure legislators into action, several cycling and pedestrian organizations decided to paint their own bike lane in front of Congress on October 20th. This was our way of showing how little money and time is required to create quality infrastructure.

“We wanted to show that governments just need the will to promote non-motorized transport. However, that bike lane was efficiently erased just two days after it was painted, and no city official claimed responsibility.

“We were all understandably angry, so we decided to do it all over again but better. We set a goal of painting a 5km bike lane that would end at Congress, the Wikicarril (wikilane). We funded our effort through Fondeadora, a crowd-sourcing site, and we managed to collect 13,500 pesos (about US$1,000) in just 4 days thanks to the collaboration of 37 generous supporters.

“We bought paint, brushes and rollers. We built wood signs. We cut stencils. We borrowed a tricycle to carry everything. We invited everyone we knew and told them to come help. And on Sunday, November 6th, we were ready to start painting. “We worked in an assembly line,” she continued.

“Some traced the priority triangles with tape and swept the ground to make sure it was clean. Another group painted the triangles green.

“There was another team that was in charge of white paint for the details and the PRIORITY legend. Others hung the signals in lamp posts.

“Some people moved up and down the street making sure each team had enough materials and bringing paint, stencils and water on their bikes.

“After each triangle was done we moved on bringing all the materials with us.

“We were a large crowd of about 80 people, divided in teams all along the street. Cycling organizations joined in. Some people heard about it on Twitter and Facebook and met us there. Others brought their families.

“It was very gratifying to see that the community welcomed our effort. Neighbours told us this was very much needed and that we should paint more. Some of the users along the route stopped and gave us moral support.

“When we finally arrived to Congress, we got to repaint our efforts that had been erased.

“At that point, the police arrived for the first time. We talked to them for a bit, but, like every time we have done this, we tell them we are just doing what government should be doing themselves.

“After the police left us alone, we threw ourselves to paint the last priority triangle of the day. Of course, we were extremely tired in the end, but it was completely worth it.”

Her concluding point is that if I group of people giving up their own time can achieve such a result, how difficult can it be for local government to find the money and manpower to do likewise?

“We worked for 8 hours,” she explained. “We painted 5 kms. We spent less than 1,000 dollars. How much would it cost to actually build the bicycle infrastructure the city needs?”

A report from CNN cited research from UN Habitat that found that the city’s present government, in power since 2006, had only installed 6.8km of cycle lanes since then.

But Jorge Fuentes, the spokesman for the city’s environment secretary, said that reflected changed priorities regarding cycling and that it was making efforts in other areas.

"The proposal was to raise the 300 kilometers of bike lanes to encourage bicycle mobility,” he explained.

"However, the Federal District Government decided to change that goal and start the first public bicycle system (in Mexico City), ECOBICI, which has contributed significantly to increasing bicycle travel."

He added that the city, whose other bike-friendly initiatives include closing some roads to motorised traffic on some Sundays, is planning to expand the scheme.

One of the supporters of the ‘5 per cent’ initiative, however, maintained that national and local governments must do more to encourage sustainable modes of transport.

"About 80% of the transportation budget in Mexico City goes to automobile infrastructure, while trips by private vehicles represent just 30% of total trips," revealed Mariana Orozco of the Institute for Transport and Development Policy.

"Since the cycle share scheme was launched in 2010, the number of people cycling to work has more than doubled,” she continued.

However, she added that mistaken perception of the danger of cycling was the single biggest barrier to encouraging people to use bikes in Mexico City.

"We haven't had a single cycle-related death since the bike-share scheme was launched. But we still need to improve the image of cycling, so that people know that it's safe... and the government needs to make it an even safer, more attractive option by providing cycle lanes.

"At least half of all commuters in Mexico City have exchanged one trip on a motorized mode of transport for a bike in the past year.

"The people are showing a huge willingness to cycle, and we just need the government to provide some support ... otherwise I'm sure they'll be more wikilanes to come!"

According to Veloz, unlike its predcessor, Wikicarril 2 is here to stay and has been designated a cycle lane by the city’s government.

"Of course, we don't expect cars not to use that part of the road anymore, we're just letting everybody know that cyclists have a legal priority along this route," she added.

1
Police officer caught on camera telling cyclists to ride in single file to be given "education around traffic offences"
2
Why was Mark Cavendish riding with Lance Armstrong this week?
3
Footage of cyclist's encounter with mountain goat "on steroids" goes viral
4
Cycling UK slams Government and threatens legal action for "excluding" cyclists and horse riders from new Wainwright Coast to Coast National Trail
5
Near Miss of the Day 827: Bus driver “bullies his way into a gap that was never there”.
6
Want the “fastest socks on the planet”? They’re yours for €1,000 + more tech news from Campagnolo, Rapha, Van Nicholas...
7
Cyclist hurt after eggs thrown at her by car passenger
8
Chris Froome doored on way home from training ride, sustains minor injuries