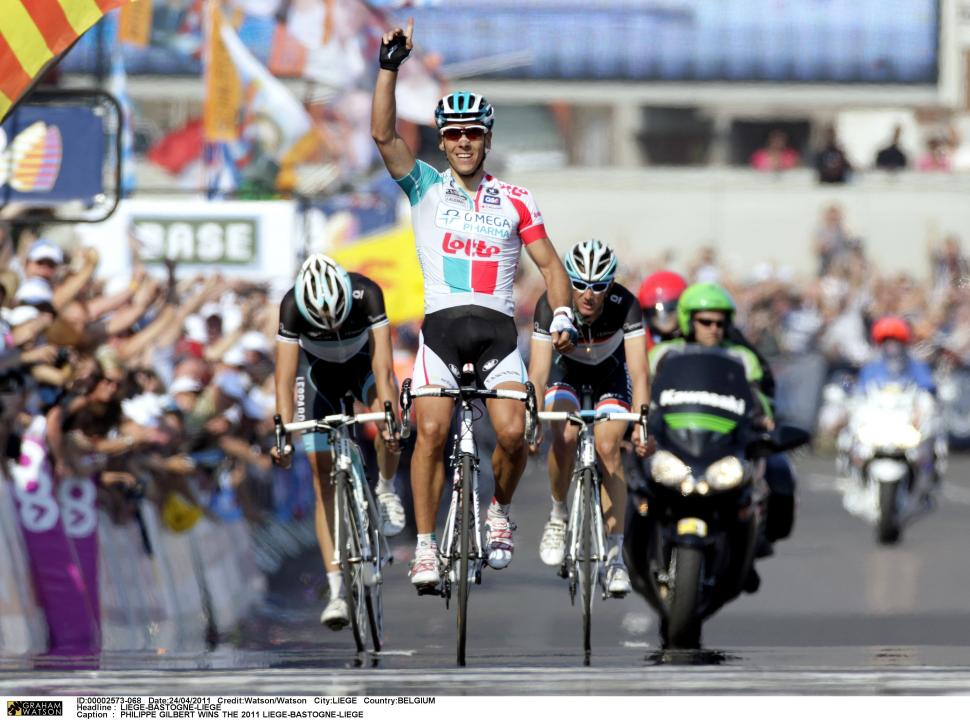 During what has turned out to be his final year with Omega Pharma-Lotto, the Belgian was the man to beat in one-day races.

That included becoming only the second man ever to win all three Ardennes Classics – the Amstel Gold Race, Fleche Wallone and Liege-Bastogne-Liege – in the same season.

The 29-year-old, who has signed for BMC Racing for 2012, also enjoyed success in the Belgian national championship for the first time, taking both the road and time trial titles.

He also wore the yellow jersey after wining the opening stage of the Tour de France, a race in which he would also sport the points and mountains jerseys.

His successes in the latter half of the season included the Clasica de San Sebastian and the Grand Prix Cycliste de Quebec.

Gilbert ended up being a runaway winner of the inaugural IG Markets Pro Cycling Index, which is based in data provided by Opta Sports, with runner-up Alberto Contador a distant second.

Reflecting on his season last month in Paris at the presentation of the route of the 2012 Tour de France, which starts in Liege, close to his birthplace of Remouchamps, Gilbert, now living in Monaco, singled out his ‘home’ Classic in which he powered away from both Schleck brothers to seal that Ardennes hat-trick as his performance of the year.

“Liege-Bastogne-Liege was my greatest win this year, because I’m from there,” he said. “I was always dreaming about this race and finally won it so it was very nice.

“I think I will also remember the series of four races I won: Fleche Brabanconne, Amstel, Fleche Wallone and Liege, it was just amazing.”

Gilbert’s principal goal for 2012 will be trying to capture the rainbow jersey, a prize that has so far eluded him, but one that has been won in recent years by three of his BMC Racing team mates, Alessandro Ballan, Cadel Evans and Thor Hushovd.

With the finale featuring the climb of the Cauberg, where Gilbert has triumphed in the Amstel Gold Race in each of the past two years, few would bet against him adding the world championship to his palmarès if he manages to carry his stunning form from 2011 into the new season.

Meanwhile, Olly Stevens, IG Markets Head of Sponsorship, said that the Index, which unlike the UCI World Ranking is calculated on a rolling 12-month basis, would be back in 2012, with some new features.

“We have an exciting host of new features and rankings planned for the IG Markets Pro Cycling Index in 2012 – next season promises to be a great one with all of the top riders having points to defend in the opening races. With the help of our expert panel, we will be undertaking a full review of all the races in the Index with some being promoted or relegated for 2012.”