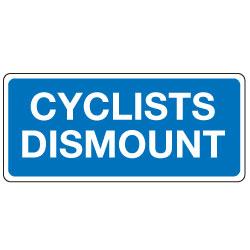 Cycle campaigners in Cambridge have called for “annoying” signs telling riders to get off their bikes in busy areas where they share space with pedestrians to be reworded to make them more polite.

According to the Cambridge News website, members of Cambridge Cycling Campaign (CCC) believe that the words ‘Cyclists Dismount’ that appear on signs throughout the city at locations such as bridges should instead ask them – politely of course – to show be more aware of pedestrians and be more courteous to them.

Instead, says CCC, which has more than 1,000 members, signs could simply ask cyclists to ‘Be nice.’ They also say that other signs in the city centre including those which say ‘Pedestrian Zone – drivers and cyclists consider pedestrians’ are acceptable.

While at first glance the request may seem a bit churlish - some may say cyclists face bigger issues than politenes… even in Cambridge, there are sound reasons behind it, insists CCC, because it says the existing signs give the impression that cyclists are required to get off their bikes when that is not in fact the case.

Moreover, they allege that the signs discriminate against cyclists since there are no equivalent signs telling drivers to ‘get out and push.’

In fact, ‘cyclists dismount’ signs are advisory, rather than compulsory, but they way they are worded can lead to conflict with pedestrians and other road users if cyclists continue to ride after passing the sign, as they are perfectly entitled to do.

The campaigners’ appeal has the support of local MP Dr Julian Huppert, chair of the All-Party Parliamentary Cycling Group, who said: “The Cambridge Cycling Campaign has made a very good point here. We need to have signs that are clear and promote consideration for others while at the same time not creating the wrong impression.

“The ‘Cyclist Dismount’ signs give the impression that, if cyclists fail to get off their bikes they are breaking the rules; this is not the case,” he continued.

“Road signs should be clear and easily understood while at the same time giving the correct information. The ‘Pedestrian Zone’ signs fit the bill.”

The cycling campaign has more than 1,000 members and is the biggest lobby group in the city.

Simon Nuttall, CCC’s events officer, said: “In the world of cycling the ‘Cyclists Dismount’ sign is amongst the most annoying.

“There’s no equivalent for motorists suggesting ‘Get out and push’.

“I think what the sign is really trying to say is ‘Cyclists: slow down and take extra care here as there may be pedestrians, children or dogs’.

“The sign itself is ‘advisory and so does not legally require the rider to dismount, but the way the sign works is that even if the cyclist slows right down and takes extra care it looks as though the rider is behaving badly and irresponsibly.

“Instead we need a sign that says ‘Be nice’,” he added.

A Cambridgeshire County Council spokesman told Cambridge News: “Cambridgeshire has far fewer of this type of signs than many other areas and they are only used where access is very restricted and pedestrians should be given priority.

“However, if the cycling campaign approaches us about changing the signs, we can consider their request on a case by case basis.”