Merida have dropped prices across almost the entire range for 2012 with many models now looking fantastic value for money.

Merida is a Taiwanese brand although the engineering is German, and while the heart of the range remains cross-country mountain bikes, they cover everything from singlespeed commuters through to high-end road bikes too.

Speaking of high-end road bikes, the top of the range model is the Reacto 907-Di2 at £4,000 (main pic). The Reacto isn’t a new frame but this is the first time Merida have specced it with electronic shifting. The Di2 in question is the new Ultegra flavour rather than Shimano’s existing, mega-expensive Dura-Ace variety. The Reacto’s frame is made from high-modulus carbon fibre using double chamber technology. This means there’s a wall across the internal diameter of the tube in certain areas to add stiffness. The orientation of the wall determines the direction of the added stiffness. The geometry is racy and that’s a tapered head tube to add extra stiffness at the front end.

The seatpost is an aero profile, the advantage over an extended seatmast being that you can pack your bike down smaller when transporting it. Plus, if you ever want to sell the bike on, you won’t have excluded potential buyers who are longer in the leg than you. 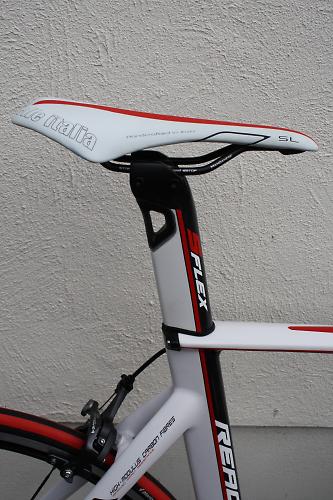 That cut out at the back of the seat post is a new feature. It houses a soft and squidgy elastomer, the idea being to add flex and comfort.

As well as the Di2 shifting, the brakes are Ultegra too, the cockpit comes from FSA and you get Mavic Cosmic Elite wheels. 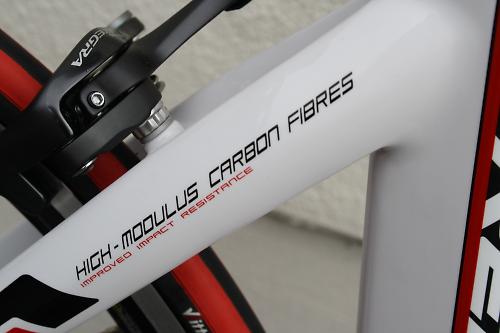 The chainset is a compact which seems pretty odd to us on a that otherwise seems like a full-on race machine. In fact, the only standard double chainsets in the entire Merida range are on the time trial bikes. Merida have stuck with outboard bottom brackets too, rather than switching to BB30 or any of the other oversized standards. The Reacto 907 (minus the Di2 suffix) substitutes mechanical Ultegra components for the Di2 kit and comes with Fulcrum wheels, but everything else is the same. That one is priced at £2,800. 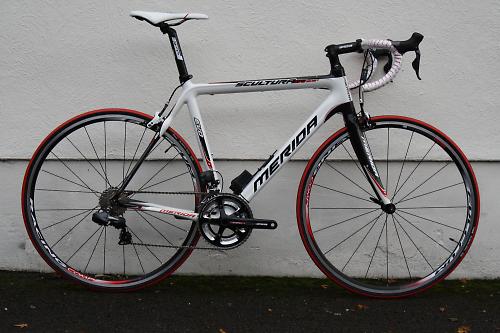 Interestingly, that’s exactly the same price as the Scultura Evo 905 Di2. The Scultura was Merida’s top dog on the road before the Reacto came along. It’s not as light as the Reacto but we reviewed it three years ago and loved it. So, pay £2,800 and you get to choose between Merida’s top frame and mechanical shifting, or a cheaper frame with electronic shifting. 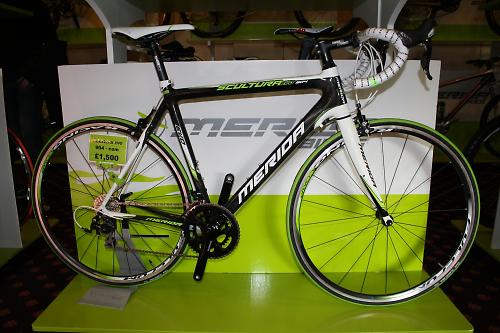 The Scultura Evo 4 was £1,800 last year but it has come down to £1,500 for 2012. Like we said, Merida have got aggressive with their pricing and we imagine this one is going to prove popular. It comes equipped with Shimano’s mid-level 105 groupset and Fulcrum Racing Comp wheels. 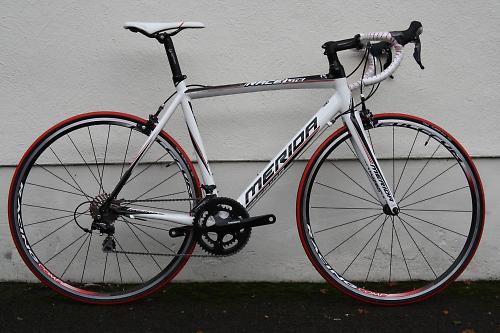 It’s built to the same geometry as the top-end road bikes but the 904 is made from hydroformed 6066 aluminium – a higher grade than the 6061 that most manufacturers use at this price. The welds are smoothed for a neat look and you’re still getting a tapered head tube at this level.

The fork is carbon and the groupset is mainly Shimano 105, which is good value on a bike of this price. Merida have compromised a little by fitting Shimano R561 brake callipers and an R565 chainset, but with Fulcrum Racing Comp wheels and a ControlTech cockpit you’re getting a lot of bike for your cash here. The Ride Lite bikes – previously the Road Race series – all come down in price too. These are designed to emphasize comfort with taller head tubes than the more expensive bikes, low-drop handlebars and skinny 27.2mm-diameter seat posts that flex more than chunkier ones.

The cheapest Ride Lite model is the 91 at £699.99. That comes with a smooth welded, hydroformed 6066 frame with a tapered headset while the group is Shimano Sora. The entry-level road bikes are the Ride series, covering £450 to £600. These are all built around 6061 aluminium frames but using SunRace (above) rather than Shimano groupsets. £499.99 gets you the Ride 77 complete with a carbon-bladed fork. Finally on the road bike side of things, Merida fit three women’s models into the range. The Juliet frames are the same as the men’s Ride models – more upright than the race machines – but they come with women-specific saddles and bars and shorter cranks. Other than that, the 77 and 91 are the same as their male equivalents and they’re the same price, while the Juliet Ride Lite 94 is essentially the female version of the Race Lite 904. 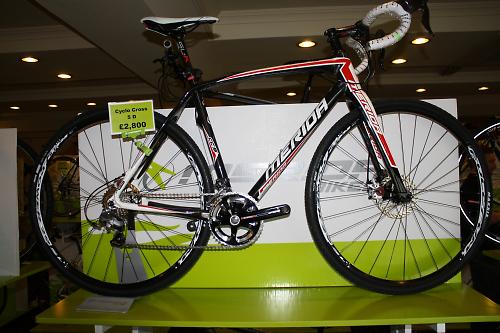 Jumping over to the world of cyclocross, Merida have just two models in the range with a big price gap between them. The major difference between last year’s Cyclo Cross Carbon 907 and this year’s Carbon 5-D is the inclusion of disc brakes now that the UCI have decided that they’re acceptable in competition after all. They’re Avid BB7R 140 HSX.

The wheels are now Fulcrum Red Power 29s but it’s still an Ultegra-based spec enhanced with some high-quality kit from FSA and Selle Italia. That switch to disc brakes means this is one of the few bikes in the Merida range to have gone up in price for 2012, from £2,700 to £2,800. The Cyclo Cross 3, on the other hand, has come down from £1,000 to £800. You get a smooth-welded alloy frame and fork with eyelets for fitting mudguards if you want to ride it on the road – and we imagine most people will use this bike as a commuter or general workhorse. The group is mostly Shimano Tiagra. 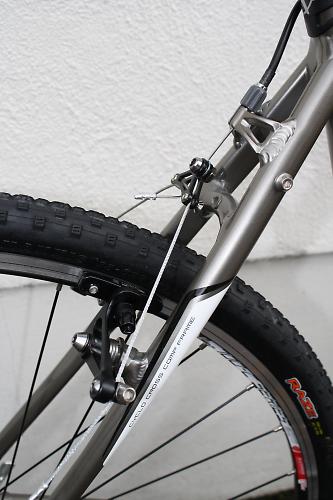 We really like the look of the S’presso bikes and all four models have come down in price for 2012. The S’pressos are designed to be cool-looking urban machines. They’re all made from 6061 aluminium, the top-level S’presso 18 running a Shimano Alfine hub gear and disc brakes and costing £999.99. 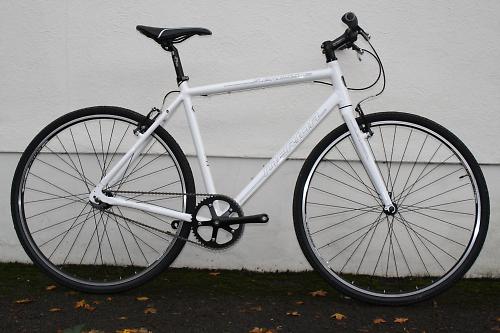 At the other end of the spectrum, the Single Speed costs just £349. Stopping comes courtesy of V-brakes and you get rack and mudguard mounts if you want to commuter it up. Flat barred road bikes next in the shape of the Speeder range. Again, prices have come down across the board although Merida have introduced a flagship model at thetop. 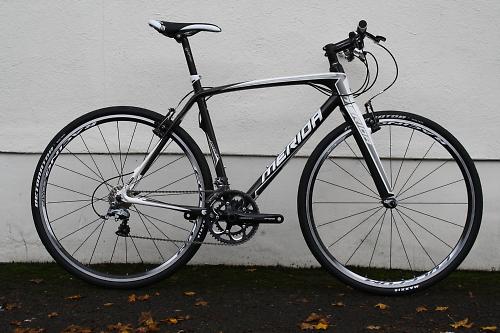 The T5 is carbon with a short head tube and stays that are designed to flex to keep you comfy, and the fork is carbon too. We really can’t imagine too many people willing to pay £2,000 on a bike of this kind but it’s certainly a head turner. The cables sit in a recess underneath the top tube that comes with a removable cover. It’s a neat design stolen from the Cyclo Cross Carbon 907. The other Speeder models are considerably less lavish. They’re built around 6061 aluminium frames, come with 700c wheels and triple chainsets, and range in price from £350 to £730… which seems a lot more realistic. The £574.99 Speeder T2 looks like a winner. That gets you Avid disc brakes and SunTour chainset in gleaming white.

The other flat barred bikes from Merida that fall into the road.cc sphere are the Crossway models. They’re hybrids with more of a mountain bike edge – suspension forks and MTB-style components – and they’re priced from £300 to £800. Yet again, they’ve all come down in price. The pick of the bunch? Hmm, maybe the £499.99 100-D. The D refers to disc brakes, in this case hydraulic Tektro Dracos. Like the other Crossway bikes, this is built around a 6061 aluminium frame while the forks are RST Neon MLs with 63mm of travel. That’s plenty for soaking up the bumps from fire roads, gravel tracks and the like. Finally, let’s take a quick gander at the time trial bikes… The Time Warp Team looks like a lovely piece of kit but, sadly, it’ll set you back £6,000. Like the £3,500 Time Warp 4, it features Merida’s ‘modular head’ system that allows you to alter the position of the bar by up to 40mm without the use of headset spacers. Instead, you use attachable modules – that section on top of the head tube/top tube – which, Merida say, provides more stiffness. 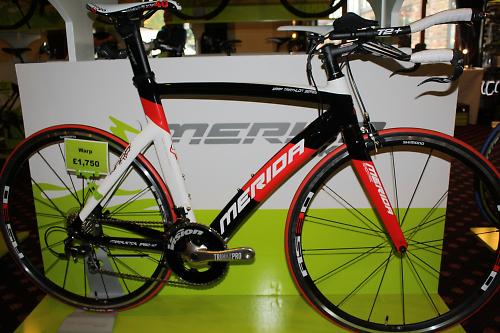