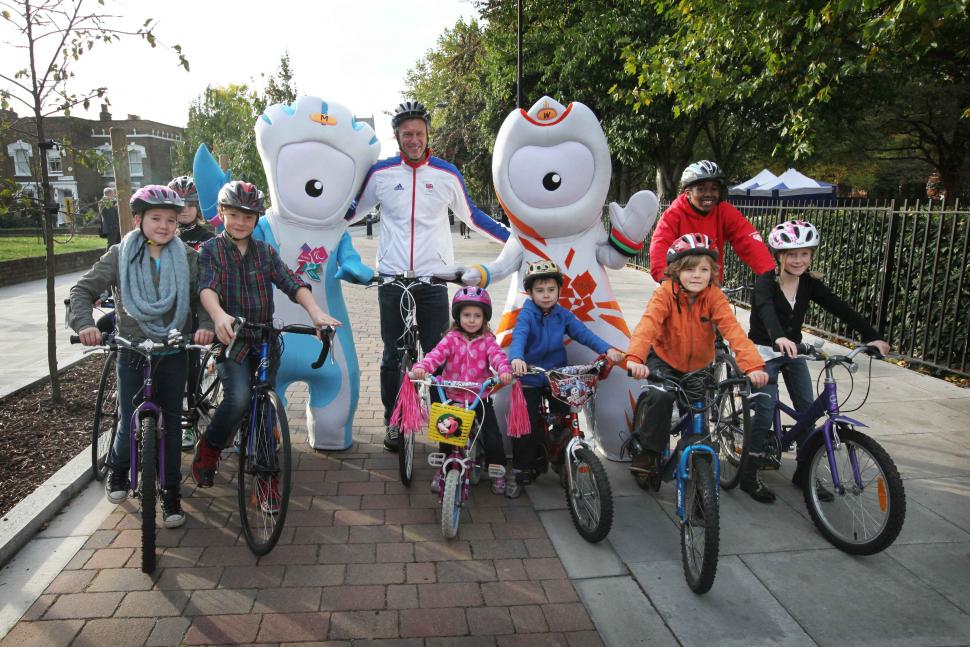 Top Gear presenter does a Tebbit, but Telegraph's Olympic Editor suggests cycling to Olympic Park not for fainthearted...
by Simon_MacMichael

TV presenter James May has criticised the use of VIP lanes at London 2012, suggesting that if senior executives of Olympic sponsors want to get to the Games next year, they should jump on a bike instead. The Top Gear host’s comments come as Transport for London (TfL) unveils new walking and cycling routes to help people get to the Olympic Park next summer, but in a blog, the Telegraph’s Olympics editor reveals her concerns having recently cycled to the venue.

As previously reported on road.cc, the ‘Games lanes,’ which are designed to whisk athletes and VIPs such as Olympic officials and sponsors to and from venues with the minimum delay, have attracted criticism from the likes of the Green Party’s mayoral candidate, Jenny Jones, who has dubbed them ‘Zil lanes,’ a reference to the way the Soviet Union’s politburo members were driven around Moscow.

May, quoted in the London Evening Standard, has continued the Communist era analogy, saying,” "It smacks of elitism. You make it exclusive and take it away from the people who live and love in the host city. It's a bit cocky and possibly a bit Soviet or Maoist."

The TV presenter, who regularly highlights the fact in his Daily Telegraph column that he has always owned a bike since he was three years old, continued: "If it's the athletes, okay, because they have to be at a peak state of readiness. If they are driven the last five miles to the arena in an electric BMW then fine. But if it's the chairman of Coca Cola or Barclays [not a Games sponsor, with Lloyds TSB being the banking partner – ed] then they should either bloody well run there or go on a bicycle."

May added: "Moving that number of people is going to be extremely difficult. I would have thought if you want to make a statement about your transport infrastructure it shouldn't be about whether the cars are electric or is the fuel source sustainable, it should be more about we organise this sharp increase in traffic movements to make it work."

The Games lanes form part of the 108-mile Olympic Route Network which will be in place in London from mid-July until after the Paralympic games end in September, and which will be operational from 6am until midnight.

Cyclists caught riding in the lanes may face a fine of up to £200, but TfL has this week announced details of upgraded cycling and walking routes to Games venues that should hopefully provide an alternative to their having to do that.

The need for better – and safer – cycling routes to the Olympic Park were the focus of a blog post on the Telegraph website this week by its Olympics Editor, Jacqueline Magnay, who recounted her experience of trying to cycle to the Olympic basketball test event last month.

Her piece was presumably written before news broke of a cyclist being killed on Monday at the Bow roundabout on his way to work at the Olympic Park, although that was a location she singled out as being particularly hazardous for cyclists after making her way out of the City along Barclays Cycle Superhighway 2 (CS2).

After saying that “the widened lanes and clear directions made the route appear straightforward and feel relatively safe,” she continued: “That is until I came to the Bow Road interchange.

“There is a large flyover above the Blackwall tunnel. Do I go over the flyover where the cars zoom past at accelerated speeds, or negotiate the traffic lights at the bottom of the hill? I took the safer, longer option but bizarrely the bike lane simply vanished. Visitors might be excused to think they took the wrong turn. Where to from here?”

Where to turns out to be Stratford High Street, the problem for cyclists exacerbated by the fact that Newham Council has so far refused to bow to pressure to extend CS2 into the borough, citing safety concerns.

Moreover, Ms Magnay points out that Leon Daniels, managing director of surface transport at TfL, has set out on his personal blog what is presumably the recommended route for cyclists which includes them having to cross four lanes of traffic, “without any dedicated lane space or crossing points.”

She acknowledges that “clearly the £11.5 million of bike lane improvements for cycling to the Olympic Park have made a big difference,” but adds that “I don't think families or inexperienced cyclists will find the journey pleasant.”

Nevertheless, in announcing a £10 million package for cycle and walking networks in the capital, TfL insists that “a variety of on and off-road routes will ensure that as many people as possible - from families and friends to experienced cyclists and walkers – are able to enjoy a fantastic way of experiencing the capital.”

The launch, on Monday, was attended by Olympic swimmer Mark Foster, with TfL saying that 75km of cycle routes in East London had been upgraded to help cope with the anticipated 1 million extra journeys to be made by bicycle and foot next summer in a scheme drawn up by Sustrans and funded by the Olympic Delivery Authority.

It is thought that in all, some 300,000 spectators will cycle and walk to Olympic venues, and the Olympic Park alone has some 7,000 bike parking spaces.

Transport for London's Director of Better Routes and Places, Ben Plowden, commented: 'The improvements we’ve made to the to the 2012 Games Walking and Cycle routes will not only help spectators access the competition venues in the cleanest, greenest way possible, but they will also be a legacy for Londoners long after the 2012 Games have finished.

“They are a further boost to the cycle revolution that the Mayor is bringing to the capital and as a result of the Active Travel programme launched today we expect around 300,000 spectators to walk or cycle to Olympic venues in London. We have also produced a fantastic new special edition London Cycle Guide that clearly shows people how they are able to walk and cycle to the Olympic Park and other venues.”

Carl Pittam, Sustrans’ London Director, highlighted that the new routes would tie in with the broader London Greenways Network, saying: “It’s great to see our plans for London 2012 coming to fruition and Sustrans is especially grateful to TfL and the ODA for their hard work and investment in this project.

“These new and improved routes through quiet streets, parks and green spaces are safer, more attractive and more welcoming for all.  They will encourage a broader range of people to walk and cycle more often, and will act as a catalyst for the development of a wider London Greenways network.”

Meanwhile London resident Foster, who has competed in five Olympic Games, believes that the new routes will not only prove invaluable in the run-up to the Games and while they are being held, but will also be an asset to Londoners once the Olympic circus has upped sticks and left town.

“We are all hoping that London 2012 is providing the inspiration for people to get active before the Games begin,” he explained.

“I live in London and always use my bike to get around, and so I’m really impressed that the cycling and walking routes leading to the Olympic Park are in place well ahead of next summer for people to make use of now.

“These cycle routes will not only be able to be used by spectators travelling to the Games on bike and foot, but will provide a long-term legacy in east London.”

A copy of TfL’s new Olympic Park and Surrounding Area map and guide can be ordered free of charge through the organisation’s website.