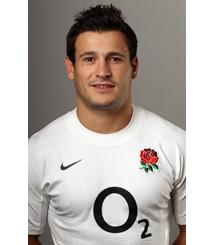 Maybe Will Carling and Lawrence Dallaglio should take Danny Care on a ride to understand cyclist's perspective...?...
by Simon_MacMichael

Ah, the poor, beleaguered England Rugby World Cup team. Off the pitch, they’re in the news for bothering female hotel employees or telling fibs about the full extent of extra-marital snogs on nights out; on it, they’re slammed for a brand of rugby described as “ruthless, pitiless” and “joyless.” Injury may have kept scrum-half Danny Care off the plane to New Zealand, but he seems determined to add to the team’s, erm… charm offensive after taking aim at cyclists on Twitter.

Yesterday, the Leeds-born 24-year-old tweeted, “I hate Cyclists!!!!!” with the hashtag, #getacar. There was no elaboration about just what it was about cyclists that irked the rugby player, and the tweet was swiftly deleted as replies started coming in.

Twitter being Twitter, news of his comments, as ill-informed as they were ill-judged, with research showing that cyclists are more likely to own a car than the average person, quickly spread.

One bike rider who learned of Care’s comments tweeted back, “All cyclists? That's a bit of an ignorant comment, no?” adding the rather lengthy but self-explanatory hashtag #ihavegotmanycarsthankstoridingmybike. That cyclist’s name? Mark Cavendish.

A tweet by track coach Lee Povey opining that Care would be getting a “lot of stick for THAT comment” was picked up by former England rugby captain Will Carling, who said, “he is still a youngster,” and jokingly promised, “I will give him a slap & he will be the better for it .”

Carling, a keen cyclist who has ridden London to Paris, spent his entire club career at Harlequins, where Care now plays. Another former England captain and team mate of Carling’s, Lawrence Dallaglio, has undertaken a series of challenging bike rides to raise money for charity.

There is of course a highly serious side to the issue of drivers, however light-heartedly they may claim their comments were made, suggesting that cyclists should not be on the road.

It’s one that was highlighted by Twitter user Condorbee, who told Care: “Our friends are killed on the roads everyday and drivers "playfully" use their cars against us, why shouldn't we be passionate?”

Care did issue an apology on Twitter yesterday evening, saying “My last comment wasn't meant to offend anyone. I didn't realise cyclists were so passionate. I'm sorry. #cyclesafe.”

We can’t help feeling, however, that he’s still missing the point about why cyclists took issue with his comment in the first place.

Might we suggest to Messrs Carling and Dallaglio, should they be reading, that requiring Care to accompany them on their next long-distance bike ride would be a suitable sanction, and one that would help him see the world from a cyclist’s perspective?