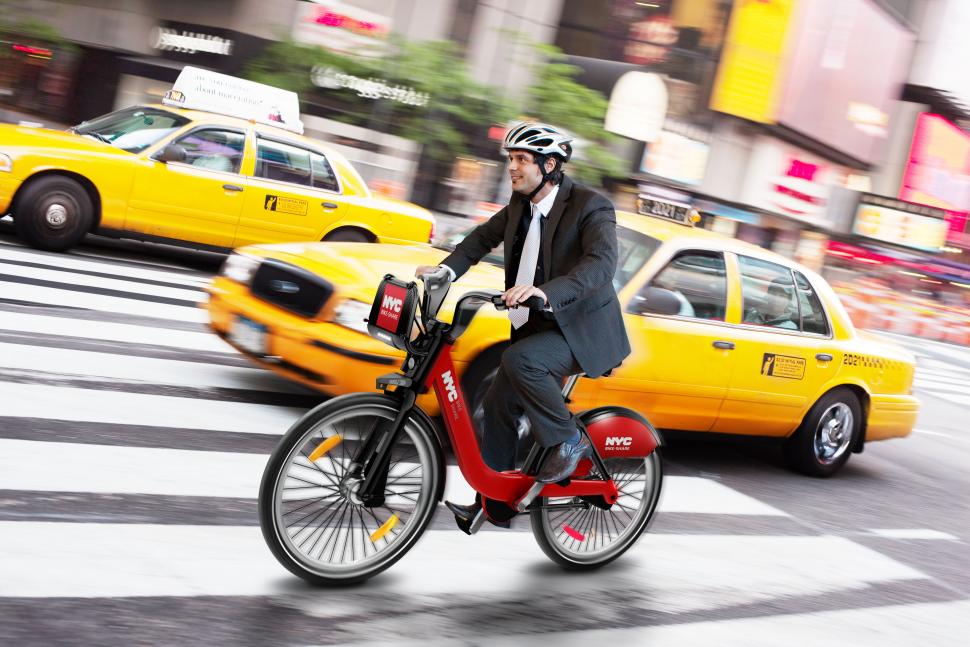 Scheme similar to those in London and Montreal; NYPD presumably stocking up on ticket books
by Simon_MacMichael

The New York City Department of Transport (DOT) has awarded Alta Bicycle Share, Inc the contract to operate the city’s 10,000-bike cycle hire scheme, to be launched next summer. Potential users are now being asked to suggest locations for docking stations, or “kiosks” in the official parlance. Initially, the scheme will operate in Manhattan and parts of upper Brooklyn, while plans to extend it elsewhere in the city’s Five Boroughs are also being studied.

The scheme will use similar bikes and infrastructure to those in use in the Bixi scheme in Montreal and the Barclays Cycle Hire Scheme in London, and in common with the British capital, New York City is seeking a commercial sponsor for the initiative, which it stresses will not be funded from taxpayer dollars and indeed in the longer term is aimed to become revenue-generating in its own right.

“With bike share, we’re reinventing the wheel by providing an affordable transportation option that’s there when you want it” said New York City Department Of Transport Commissioner, Janette Sadik-Khan in a press release issued yesterday.

“Whether it’s covering the last quarter mile from the subway or reaching that dead zone between stations, bike share offers a great, new way to get around in a new york minute and will bring needed jobs and revenue to the city.”

The scheme is being showcased to potential users through a series of roadshows in the city over the next few weeks, and although prices have not yet been released, there is likely to be a period of free hire for registered members, similar to that under the London Cycle Hire Scheme. It will also be open to casual users.

Deputy Mayor for Government Affairs and Communications Howard Wolfson said that scheme would provide New Yorkers and visitors to the city with another way of getting around.

“Bike share is about choices for New Yorkers,” he said. “In New York City, you should be able to walk, take the subway, drive, take a bus or bike safely, economically, and efficiently. Bike share offers a practical and cost-effective option that generates revenue for the City. It's a choice that is a win for both the City and its residents.”

Alison Cohen, President of Alta Bicycle Share, stressed the environmental benefits that the system would bring, as well as it making easier for locals to get around their city.

"We could not be more excited to bring our successful bike share system to New York City," she said "Bike share is a new form of public transportation that will help connect New Yorkers to their own neighborhoods, to other neighborhoods and to public transit. At the same time, it will make NYC a healthier, cleaner, greener and safer place. Alta Bicycle Share is elated to help make this happen.”

Presumably New Yorkers will come up with a suitable nickname for the bicycles, perhaps drawing on London’s example and naming them after the city’s mayor – Bloomberg Bikes, similar to Boris Bikes, has a suitably alliterative quality to it.

It’s not known whether potential users of the scheme will be provided with advice on how to deal with officers from the New York Police Department, who as numerous stories here on road.cc attest can be a bit over-zealous when it comes to enforcing laws (or, in some cases, what officers erroneously believe to be the law) as it applies to cyclists.

In the latest incident, the website Gothamist reports that one cyclist was ticketed three times in quick succession on the city’s Sixth Avenue – the first for not riding in the bike lane, the second for riding through a red light, which the cyclist disputes, and the third for riding the wrong way on a one-way street, which he admits.