If you think that handmade means retro and steel think again!
by Tony Farrelly

Custom carbon, retro roadsters, lightweight steel and some cutting edge prototypes in carbon and titanium feature in our latest slideshow and gallery of pictures from the first ever European Handmade Bicycles Exhibition (EHBE).

First up, (and sandwiching our slideshow) for those who think “handmade” means retro steel check out this custom carbon time trial/triathlon bike from Rafael, not sure it'd be considered UCI legal the way the top tube/headtube junction rises above the steerer and it's depth definitely make it look like a fairing (although if that Specialized we featured recently could get through scrutineering… mind you they're supposed to be tightening up the rules at the end of the Giro). Interesting too that Rafael have made their bike a compact whereas most of the top line TT bikes we're seeing at the moment err very much more towards horizontal top tubes. When we spoke to the guys at Fixie inc last year they were very keen that fixed gear bikes shouldn't be seen as merely some cheap retro type of bike they wanted to push the technology forward experimenting with new types of chain, including belt drives, and sprockets. Rafael have taken this approach to its logical conclusion with their custom carbon fixed… and it's belt-driven too. Possibly the ultimate in high tech, minimalist functionality and the best looking grey bike with a green tyre in the world. Another striking looking machine to catch our eye was this stainless steel road bike from Riccorsa built from Columbus tubing with a coffee and cream paint job. Stainless steel has made a small comeback in the framebuilding world especially since the introduction of Reynolds 953 in 2006. The downside of 953 at least is that while it shares many of the benefits of Titanium, toughness, rust resistance, right quality, it also shares the drawbacks too in that it is very hard to cut. Here's another bike the UCI might have a problem with, this sub 6.8Kg Neueck race bike from the German frame builder Jens Heid. it certainly is a beautiful looking bike. Which is maybe not something you might say about Bruno Meres carbon frame concept – the UCI would definitely hate it and it would be a right bugger to pain as well. Moving from concept to prototype, Italian company Passoni, which specialises in making Ti/carbon bikes was showing off this 2010 titanium frame featuring a carbon seat tube – we'e not sure if it is supposed to be an integrated seat post or if the post in the frame pictured simply hasn't been cut down – we're guessing the latter. 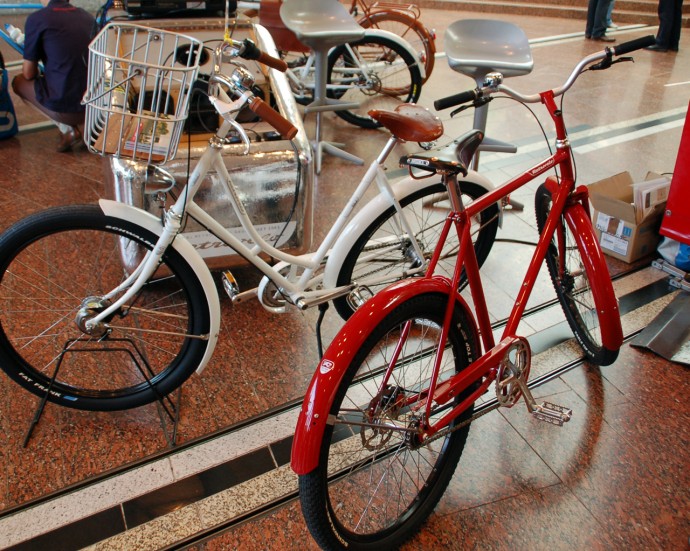 We did promise you roadsters, so here they are… from German outfit Retrovelo a stepthrough mixte model and a diamond frame version. The latter doesn't look a million miles away from the Pashley Workbike used by posties and there does seem to be a growing demand for just this sort of practical yet stylish bike from urban riders - something Charge too have obviously picked up on with the new Plug Grinder. There are loads more pictures from the show in our new EHBE gallery including some gorgeous Tommasini steel frames, Pegoretti road bikes, the Fixie Five Star (above), bikes from Seven and Independent Fabrications, more from Daren Crisp, wooden rims from Ghissalo, laser etching, and lots more…