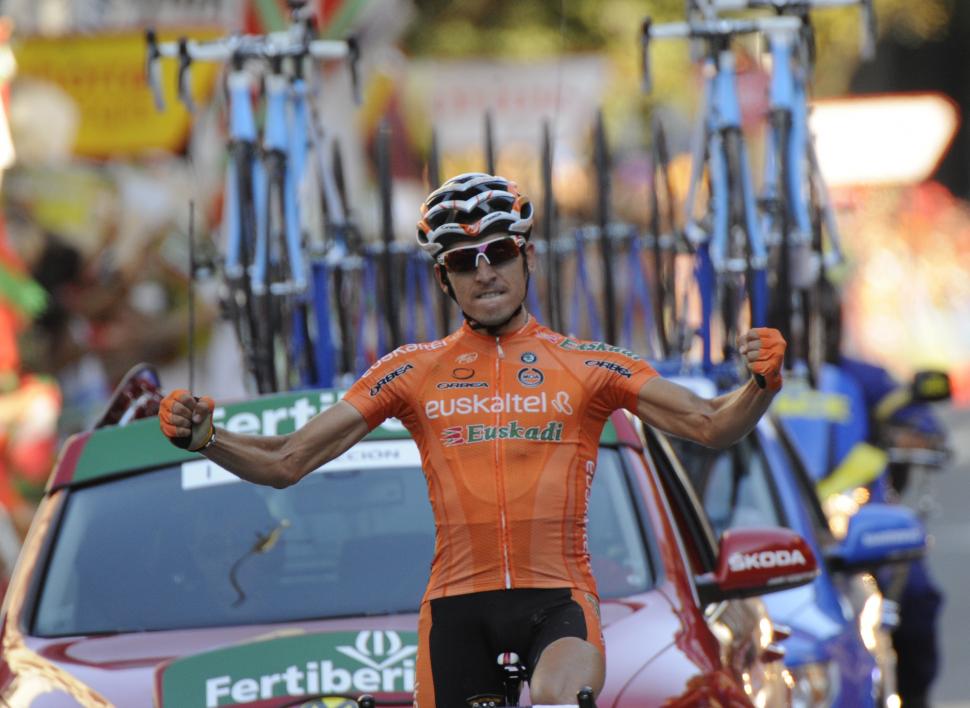 Vuelta organisers Unipublic have hailed the return of the race to the Basque Region after an absence of 33 years, with huge crowds this afternoon cheering on local rider Igor Anton of Euskaltel-Euskadi as he took a convincing solo win in Bilbao. Meanwhile, Team Sky's Chris Froome, second overall, attacked on the day's final climb in an unsuccessful bid to eat into race leader Juan Jose Cobo's 13-second advantage, but insists he will have further opportunities before the race ends in Madris on Sunday.

"It couldn’t have been a better day for us," said race director Javier Guillèn. "Our return to the Basque Country has happened with no problem. I didn’t have any doubt about it. I thought it’d be great but until you’re here to experience it, you cannot materialise what the Basque Country means for cycling. With the crowd on the roadsides, it’s been the greatest cycling party I’ve ever seen in my life. A Basque winner makes a perfect final for a perfect stage.”

Few of those thronging the long finishing straight in the city that hosted the actual finish of the race between 1955 and 1970 would have disagreed with that last sentiment, many bedecked in orange to show their support for what is effectively the region's team, many others waving the red, white and green Basque flag, the ikurrina.

Anton himself, who had crashed out of last year's Vuelta while leading the race, had started this year's 66th esdition as favourite, but fell out of contention early on as he struggled to keep up with his GC rivals during what was a tough opening week.

However, It was the fact that he was more than three quarters of an hour behind race leader Cobo that allowed him the leeway to go for glory today, slipping into a four-man break with team mate Gorka Verdugo, Movistar’s Marzio Bruseghin and Astana’s Alexsandr Dyachenko. 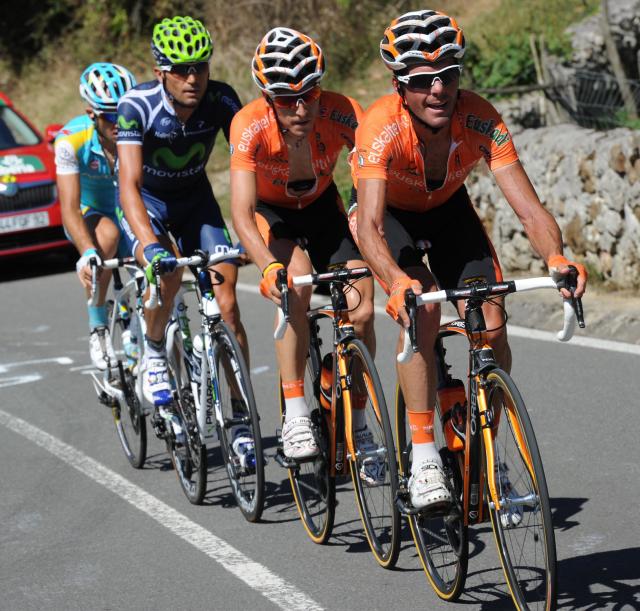 Euskaltel-Euskadi make the most of home advantage (copyright: Tour of Spain/Graham Watson)

Anton agreed that despite today's stage passing close to his home, it wasn't one he'd initially aimed for. "No, because I was targeting the overall victory and I imagined that I’d enter Bilbao with the red jersey," he admitted.

"Unfortunately, the Vuelta didn’t go as I wanted, so I changed my goals and switched my focus onto this particular stage where I was at home, in front of my friends and family.

"The uphill finishes at the Angliru and Peña Cabarga brought my moral back to the top and I got to believe that I could do well here, but I don’t know where I’ve found the strength for winning.

"I understand that I owe it to the fantastic job of my team-mate Gorka Verdugo and the unbelievable support from the crowd. The climb of El Vivero is my daily bread at training. For the team, it’s historical! For me as well, because it’s my first pro win from a breakaway group and it opens possibilities for my future. And now Euskaltel-Euskadi has won a stage in each Grand Tour this year," he added.

As Anton put distance between himself and his closest rival Bruseghin on the second and final climb of the Category 2 Alto El Vivero, whose summit lay 14 kilometres from the finish, Team Sky's Chris Froome twice went on the attack to try and break overall leader Juan Jose Cobo, but both times the Spaniard managed to stay with him. 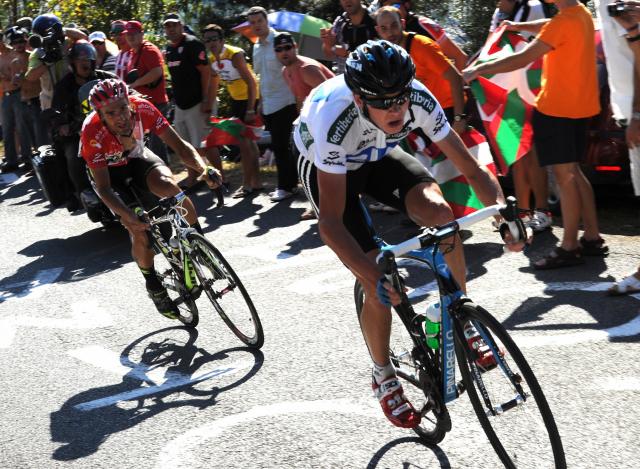 Froome, who got solid support from his team throughout the day, with Wiggins working hard at the front of the group to help set up his attack on the final climb, conceded that Cobo had done well to counter his moves, but insisted that he would have further opportunities to try and reduce the Spaniard’s lead.

“We did everything we could,” he said after the stage. “We rode up fast all day. Thomas Löfkvist set up the pace till the climb, Bradley helped me and I attacked but Cobo responded well. He didn’t show any weakness. I had a few looks at him but all the time, he was on my wheel. He deserves to keep the lead. 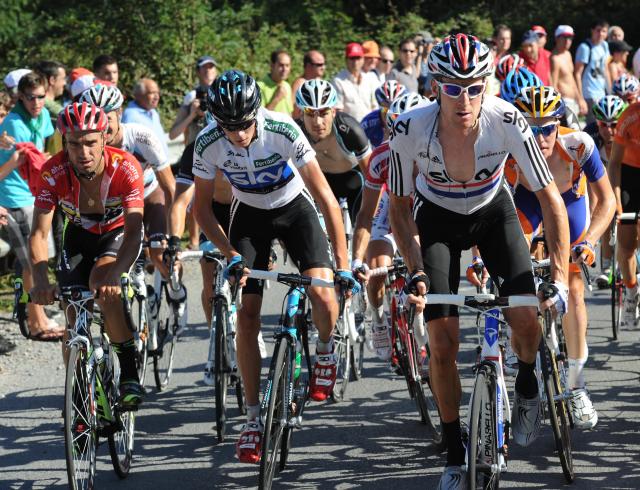 He added: “I’ve been impressed by the crowd today. It was amazing how many people on that climb. It’s nice to see Anton winning on his own land. It must be really special. I’m very happy for him.” 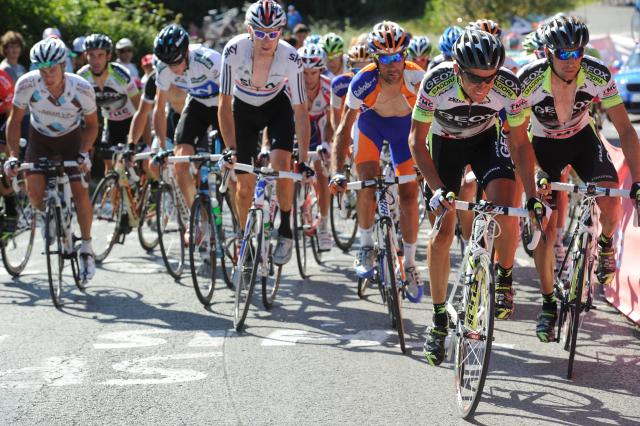 Cobo expects further attacks from Froome and Team Sky tomorrow, but is sure that he and his Geox-TMC team - including former Grand Tour winners Carlos Sastre and Denis Menchov, plus David de la Fuente, who has proved to be a more than able lieutenant, will be equal to the challenge.

“Every day the victory gets closer and closer but tomorrow will be another complicated day," he said. "We knew that Froome was waiting for the last climb but I kept some energy to defend myself. I’m happy. Tomorrow, Urkiola is a climb that I know, I’ve climbed it on many occasions. Sky will attack us again but we’ve got a strong team to handle an attack from Froome at Urkiola.”