We check out Team Lampre’s speed machine
by Mat Brett

Wilier announced earlier in the year that they are launching a new high-end TT bike called the Twin Foil – pro team Lampre have been using it over the past few months and we’ve had the chance to have a good look at Eurobike.

The biggest difference from normal is the front end – more specifically, the fork arrangement. The steerer still goes through the head tube in the normal way but the load is shared with two stanchions that head straight up from the fork legs, bypassing the head tube, which then become the stem. In other words, the fork and the stem are combined, pivoting on a steerer through the head tube. 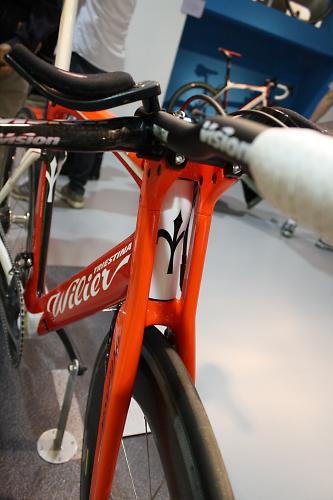 The obvious question is, what’s the point? The idea is that air passes through the gaps between the head tube and the fork/stem stanchions. The air heads backwards (relative to the bike) through there and passes between the widely spaced seatstays too. So air goes right through the bike from front to back, minimising the turbulence and drag. That’s the theory. Whether it works in practice, we couldn’t tell you. We’ve seen the bike, not ridden it. Obviously, that extra material increases the frontal area but Wilier reckon their wind tunnel data shows that better management of the air works to improve speed. The bolts on the handlebar clamp thread into nuts that sit in recesses in the stem section rather than screwing directly into the stem section itself. That makes a lot of sense – if you cross thread it, you just replace the nut, not the entire fork/stem. 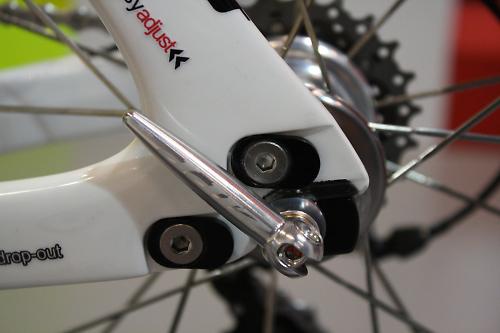 Other features are well thought-out too. The Lampre team wanted adjustable dropouts at the back so they could alter the position of the wheel behind the seat tube cutout for use with different tyres. But they didn’t want rear-facing dropouts because they’re that much more awkward when you need a quick wheel change out on the road. Wilier came up with a vertical dropout that’s bolted in place via two slots on each side. You undo the bolts and move the entire dropout forward or backward. Of course, you need to make sure you move them an equal amount for the correct wheel alignment. The front mech mount is neat, although we’ve seen similar on other bikes in the past. You can move the mount within a hole right through the frame to get it positioned where you need it without the need for any bolts outside the existing frame silhouette. The same is true of the seatpost clamp. It’s a wedge-type design with all the parts sheltered away so they’re inside the frame or flush with the surface, again for improved aerodynamics. 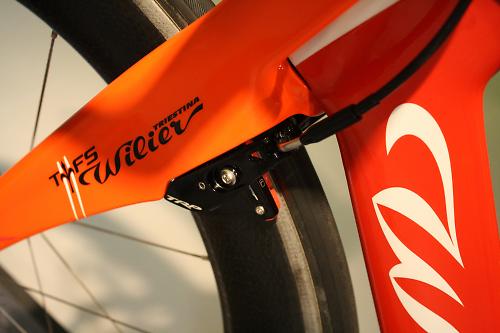 The TRP cantilever brakes are tucked away too, the front one sitting behind the fork legs with the rear one living underneath and just behind the bottom bracket. 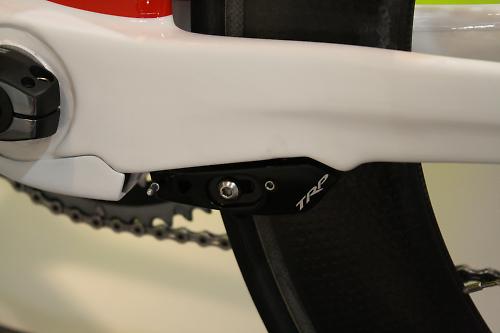 You'll be relieved to know that it’s UCI approved, by the way, so you can ride it in next year’s Tour de France if you want.