Italian component maker with a Brit in the engineering hot seat forms collaboration with American specialist in power measurement.

3T the component company that historically made stems, handlebars and seatposts from aluminium but in recent years has not only branched out successfully into carbon-fibre manufacturing but also showed us an innovative new carbon crank set last Eurobike and launched wheelsets this year has now forged an alliance with CycleOps Saris, the established maker of the Powertap brand of power-measuring hubs and displays. 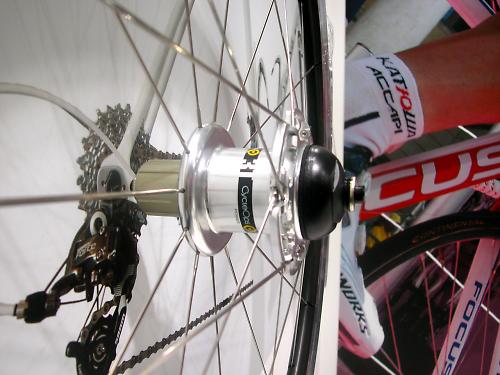 The Saris Powertap measuring technology will be built into a new variant of the distinctively-spoked hubs that form the basis of the recently-launched Accelero clincher and Mercurio tubular wheels. In addition, the new 3T Meta as-yet-unlaunched crankset will now optionally and ungradeably include the sensor for cadence measurement.

The final part - and a major step forward for both companies in that it encroaches into territory currently dominated by the premium technology brands currently in charge of GPS and HRM, Garmin and Polar respectively - is a new carbon stem, the Integra Ltd, that in default mode looks just like a standard carbon stem, albeit a boxy one. The clever bit is that a top section of the unit can be removed and replaced with an aero-shaped display module which integrates perfectly with the stem for a much improved appearance over the usual afterthought-looking item zip-tied wherever it fits best. 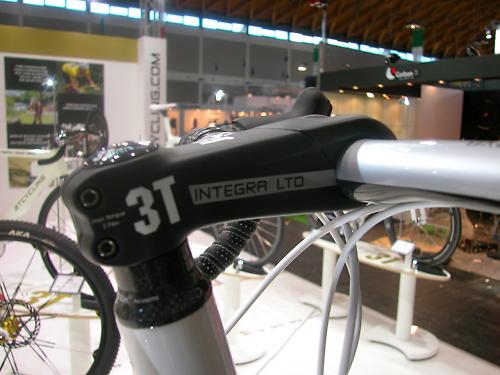 Richard McAinsh, the British carbon fibre specialist that 3T bought in from Ferrari F1 to stir up its designs and processes, is circumspect about a launch date for the new components but anticipates the middle of next year.

Definitely on a shorter schedule for arrival is a completely new all-carbon version of the successful Ventus integrated aero bar for triathletes and time-triallists. Now named Ventus II and suffixed 'Ltd' to signify a developing theme within 3T's product range for its carbon products, the new bar is considerably tidier not to mention elegant, lighter - although we omitted to ask what that weight is, stand by - and now compatible for routing Shimano Di2 cables. Clearly aiming to completely dominate the premium carbon aero 'bar market, the new version of the existing UCI-legal Brezza bar - you guessed it, called Brezza II, is also suffixed 'Nano'. Why? Because the base 'bar is only 300 mm wide. In a blinding flash of inspiration it occurred to McAinsh's team while they were testing in the wind tunnel that reducing the width of the bar also reduced the frontal area of the complete bicycle both in absolute terms and when the rider is necessarily in the 'controlling' phases of a race ie when they're cornering and steering. 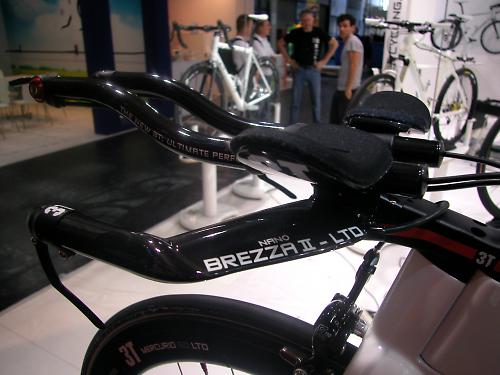 Needless to say, on products we're previewing before the show has opened and prior to the UK distributors arriving, there are no prices yet but we may be able to update over the next couple of days. 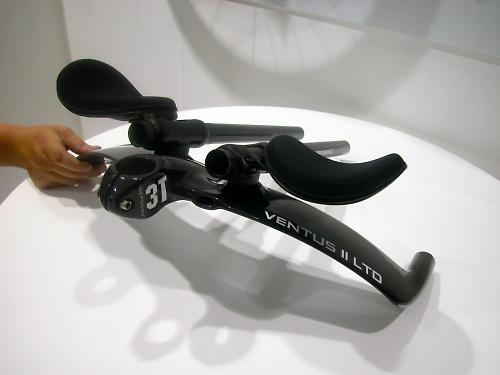 3T Ventus II Ltd is all-carbon, stronger and lighter than the model it replaces and Di2 compatible