The outward appearance won't change very much from the white-with-a-hint-of-pink that's sold well for them, it seems - our most recent reviewer of the Hybrid Comp Fi certainly liked it - but the Boardman women's models will be getting a 2012 revamp this month, particularly on the top carbon model to bring it into line with the recent improvements to the frames in the men's line. According to Director of R&D Chris Boardman, "The all-new 2012 Fi range builds upon the successful and ever-popular initial offering and includes input from our world-class female athletes, combined with my own cycling heritage to deliver a series of bikes specifically designed for women who enjoy cycling at every level."

The top Boardman racer, the Team Carbon Fi features all the upgrades recently made to the standard unisex Team Carbon for the same price including higher-grade carbon fibre to improve the strength-to-weight ratio of the frame, a BB30 bottom bracket and tapered headtube and steerer for improved control and responsiveness. There are also fully concealed cables. For the £1,299.99, you also get Shimano 105 2x10-speed gears and brakes as well as an FSA Gossamer Pro 50/34 chainset and Mavic Aksium wheels. What's so special about women's fit on the latest women's bikes?

In case you're wondering what's so female-specific about these bikes apart from pink in the colour scheme, it's to do with how the designer shapes the frame and chooses ancillaries like handlebars and saddles to suit female body sizes and shapes. The big issue is that women are usually just smaller and most 'men's' bikes only have one shortest-but-not-quite-short-enough size upon which the great majority of average-height women have to be forced, whether they fit very well or not.

It's one of the reasons why a 5'4" (1.63m) woman almost invariably looks uncomfortable on a 'racing' style bike and the situation isn't helped by the same average-height woman having longer legs and a shorter torso than the man of equivalent height.

The good news is that as more women have taken up cycling lately - and complained with justification - the makers including Boardman have responded with ranges that include a better selection of smaller sizes for a start and then usually shorter top tubes for each size to correspond to the assumed shorter torso. 'Assumed' because, of course, it doesn't necessarily follow that you conform to the standard but at least the better bike shops and even Halfords these days have staff with the experience to sit you on a bike and check out the vital criteria. If in doubt, just remember it's just like trying on clothes and you can follow your instincts and preferences for what feels just right.

Of course, for women there are also a fair number of pastel colour schemes which will either have you cooing or gnashing your teeth. Boardman on its Fi range has gone down the fairly uncontentious route with lighter schemes than those found on the equivalent men's options but with just the slightest touch of pink that our Leonie didn't find too objectionable at all when she reviewed last year's Boardman Hybrid Comp Fi.

Mr Boardman's designers have played it very safe indeed on the top carbon model by making the high-performance Team Carbon Fi almost as bang-on-trend stealthy as its male stablemate. The important thing, though, is that it comes in sizes Small, Medium and Large or 46, 50 and 52.5cm if you prefer your sizing continental. 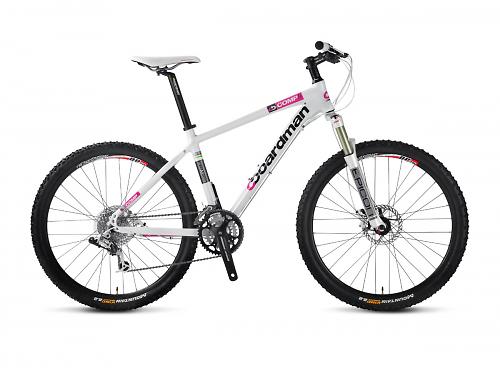