Ibis has carried out what it's calling refinements to the layup of the carbon-fibre Silk SL road frame to bring the weight down to 2.2lbs or, as we Europeans like to say, 1,000 grams which is neither a bad weight for a top-notch race frame nor a too shocking price for £1,549.99* including the matching carbon fork.

In particular as that is for a 58cm size which may be average for Utah but a little larger than the frames we normally see quoting a 'sub-1,000 gram' weight. Furthermore as befits a small company that has always done things its own way, the revised frame is called a 2011 launch by Ibis which would make perfect sense to anyone else except the bike industry which is in the throws of launching its 2012 models. The Siberian White option of the new Silk SL; available from September

Interesting although perhaps not surprising for a company with a 30-year heritage in building nice metal frames, Ibis is using both titanium as a benchmark for suppleness and 'large-tubed' aluminium for responsiveness when describing the ride quality it was aiming for in the revised frame: "stiff but remarkably smooth riding," as Ibis put it. We hope to find out for ourselves as the UK importer 2Pure has promised us the first one to try when the new stock arrives in September.

There's also talk of strength, which is hardly ever mentioned but you nevertheless always hope is on the agenda, quoting a '900lb frontal impact' that the frame's downtube can survive when applied to the front axle, "stronger than many full-suspension mountain bikes," Ibis claims. It's only our opinion but Ibis bikes have not only always had a proper metal headbadge but the most beautiful and elegant cast bronze headbadge as well and that's usually accompanied by simple and understated paint. The two new colour schemes named Siberian White and Matt Matte - a matt clear lacquer over the natural carbon - certainly tick that box for us especially in the matt black although you never really can tell until you see the bike built and in the flesh, as it were. 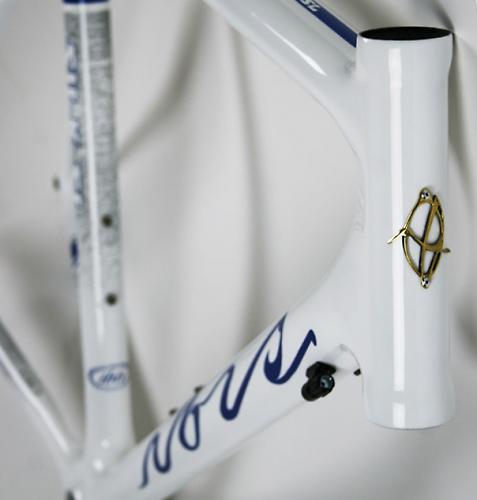 * Not much if you say it fast.