A frightening kidnap attempt prompted round-the-world cyclist James Bowthorpe to make a rushed departure from Iran in the early hours of the morning, skipping Pakistan and continuing his challenge in India.

The 31-year-old, who is attempting to beat the round-the-world cycling record, is still on track to shave a day off record-holder Mark Beaumont’s time, despite the incident, which left him “freaked out”, according to his girlfriend.

Speaking to road.cc today, James’ partner Nadja Coyne, who is part of his support team in the UK, said the full details would be published shortly in his blog, but confirmed there had been an incident.

She said: “He was in Iran and some people tried to bundle him into a car, and he got a bit freaked out.”

James flew out of Tehran and into Amritsar, India, and he is now continuing his journey.

Hints of a problem could be detected on James’ Twitter feeds from Iran. On Sunday, May 3, he wrote “If you know the right people (Edwin, pictured) you can use visa to buy a flight from Tehran at 1am. Out!” 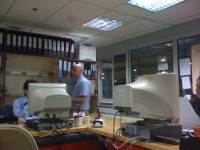 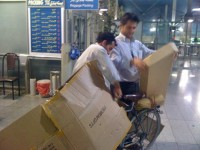 Here are the pictures from James' blog that illustrate his sharp exit.

Nadja said: “It takes such a lot of energy cycling that far every day and the routine of it, setting up camp every night, takes a lot of energy. He’s not actually finding the cycling too awful. It’s not like he’s in a lot of pain. He hasn’t got any saddle sores.

“The worrying was the straw that broke the camel’s back – the extra drain on his energy that he couldn’t deal with. He decided, I’m going to get to a place where I feel safer.”

Nadja was alerted to the problem when she received a message on her phone from James, while she was attending a wedding. She said: “I had no phone reception so I was going into the middle of a field trying to make calls. Luckily one of our friends is a correspondent for ABC.” She said the friend had contacts in Islamabad lined up to help James, but in the end he didn’t need it.

James leapfrogged Pakistan, flying into Amritsar, India, and is now happily continuing his journey down the Great Trunk Road, one of South East Asia’s oldest and longest roads, which is providing him with some flat and fast terrain. He had always planned to skip Pakistan, because of the unstable situation there, and James and the support team are waiting to hear from Guinness World Records to confirm his route change doesn’t invalidate his record-attempt.

Nadja confirmed James is slightly behind the punishing schedule he set for himself, but still on track to beat the record by at least a day.

James is attempting to raise £1.8million for research into Parkinson’s Disease.