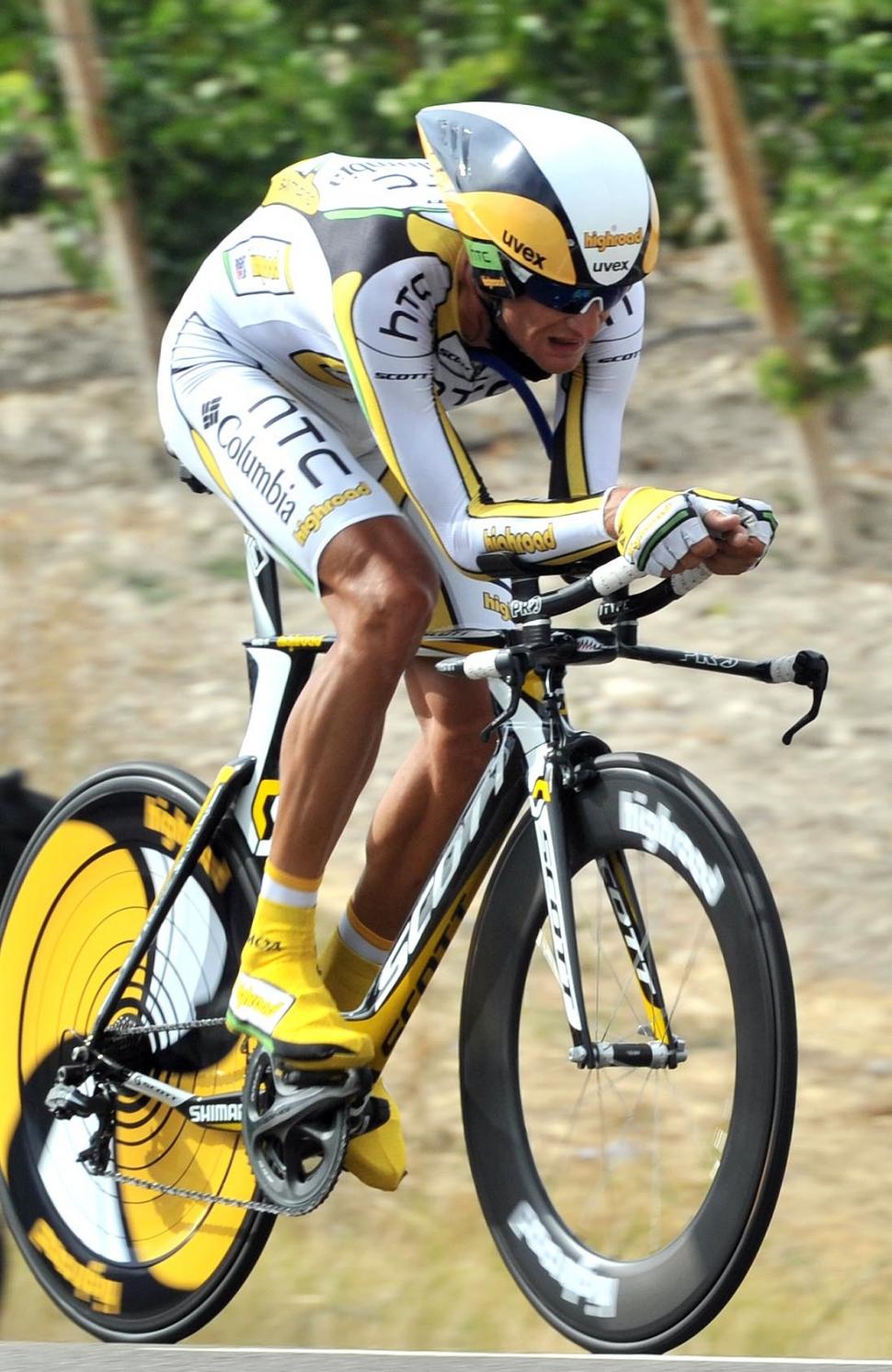 Peter Velits on his way to winning Stage 17 of the 2010 Vuelta (copyright - Unipublic:Graham Watson)

Elsewhere, Brajkovic, Kloden and Horner each extend with RadioShack for two more years
by Simon_MacMichael

Peter and Martin Velits have each signed a two-year contract to ride for Omega Pharma-Quick Step for the next two seasons. The Belgian team, whose new sponsorship structure was announced yesterday, has also signed the 27-year-old Belgian rider Stijn Vandenbergh from Katusha following a busy couple of days of announcements of transfers and new contracts within the sport.

The 26-year-old Slovakian twins are the first high-profile departures from HTC-Highroad, whose future is still uncertain with owner Bob Stapleton yet to confirm a replacement sponsor for the Taiwanese smartphone manufacturer, which is not renewing its deal when it expires at the end of the season.

Of the pair, Peter is the more accomplished rider, finishing third in last year’s Vuelta after a storming ride in the Stage 17 individual time trial. He finished 19th overall in last month’s Tour de France.

“I’m happy to become a part of such a prestigious team with great goals for the future,” he commented today. “It’s doubly satisfying if I think that I can continue riding side by side with my brother Martin. My objective is to continue growing gradually and repay the trust that the team has placed in me.”

Team manager Parrick Lefevere said: “Martin, Peter and Stijn will be three important pieces on our team’s chess board. Stijn is a worthy athlete, a specialist in the classics and a team player. Martin and Peter come from a country full of potential like Slovakia, which is growing on the cycling scene.

“Martin is an athlete who’s already proven his worth in the young categories and in his first seasons as a pro,” he continued. “We’re counting on him a lot, since we consider him an athlete who can improve even further.

“Peter, on the other hand, stood out to us for the good end-of-season he had last year, which saw him winning a stage and third place in the GC in the Vuelta España and for the good performance at the recent Tour de France. He’s a complete rider, with him the team is gaining an athlete who can potentially make it to the podium in the Grands Tours.”

Quick Step has also confirmed that French national champion Sylvain Chavanel, who had two spells in the maillot jaune in last year’s Tour de France and finished second in this year’s Tour of Flanders, has renewed his contract for a further two years.

Meanwhile, Thomas Lovkvist is reported to have extended his existing contract with Team Sky into 2012, and is also scheduled to ride in the Vuelta which starts later this month, a race in which the British ProTeam’s GC ambitions will centre on Bradley Wiggins.

Among riders on the move, however, are Skil-Shimano’s Kenny Van Hummel, who heads to fellow Dutch outfit Vacansoleil-DCM, and Lampre-ISD rider Andrey Kashechkin, who takes advantage of the UCI’s new rules on mid-season transfers to join Astana, based in his native Kazakhstan, with immediate effect.

Katusha are reported to have signed the Spanish rider Angel Vicioso on a one-year contract from Androni Giocattoli. The 34-year-old won Stage 3 of this year’s Giro d’Italia, his victory overshadowed by the death that day of Leopard-Trek’s Wouter Weylandt.

HTC-Highroad’s Patrick Gretsch is headed to Skil-Shimano, the 24-year-old German having signed a two-year contract with the Dutch UCI Continental team.

Belgian rider Gianni Meersman leaves FDJ after four years for RadioShack, where the rider, aged 25, will renew his working relationship with Johan Bruyneel, his former directeur sportif at Discovery Channel.

Bruyneel has also confirmed that Janez Brajkovic, Andreas Klöden and Chris Horner will all remain with the US team for a further two years, which will be some comfort from the team following a disastrous Tour de France campaign that saw all three abandon through injury.

Horner came down heavily in the same crash that forced Bradley Wiggins out of the race with a broken collarbone, the American managing to finish the stage despite suffering concussion and a broken nose in the incident.

The new contract will keep Horner, winner of this year’s Tour of California, at RadioShack beyond his 41st birthday, although his racing programme is on hold at the moment after he was admitted to hospital on Sunday with chest pains and was subsequently diagnosed with a blood clot on his lung.