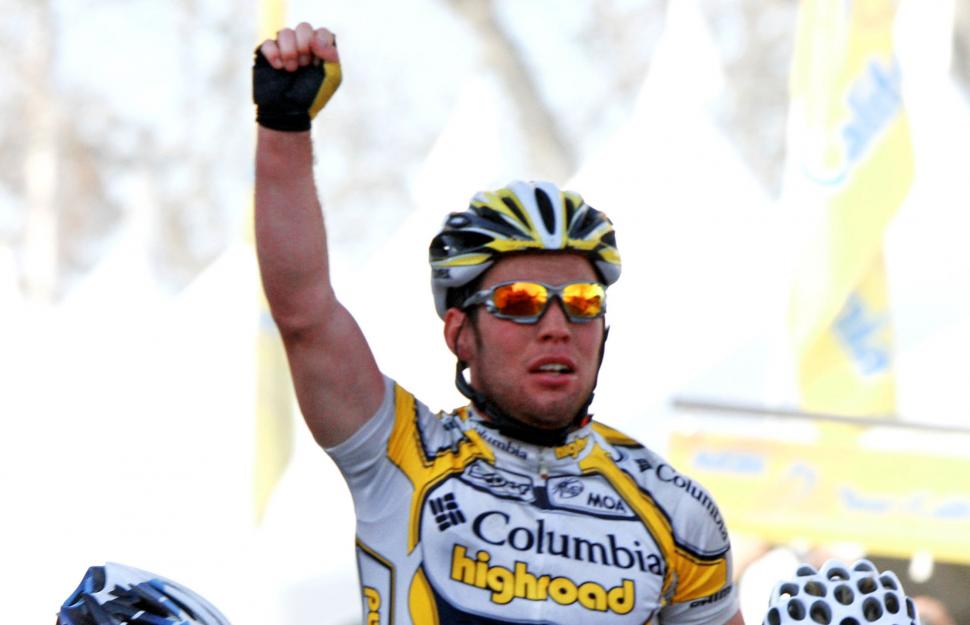 Cavendish and Brailsford interviewed on the BBC's Inside Sport

Last night's BBC Inside Sport interview with Mark Cavendish didn't deliver quite the expected level of fireworks, but it did have the added spice and frisson of having Dave Brailsford sitting on the sofa back in the studio with Gaby Logan (and Geoffrey Boycott).

So what did we learn? Dave Brailsford reckoned Cavendish was cycling's Wayne Rooney… but better, that Cavendish had already worked out and adopted for himself many of the strategies advocated by Team GB's psychologist, Steve Peters. And that he's addicted to winning. Oh, and that if you want to make Cavendish squirm in front of a TV camera two subjects will do the trick: one is his early alternative career as a teenage ballroom dancing champ; and the other last year's Olympic games - and the madison in particular.

When asked about his disappointment in Bejing his lips may said that he'd moved on, but his body language told a very different story. In fact when pushed by interviewer, Gaby Logan, even his words betrayed his true feelings, “it's what I sacrificed to go there that hurts the most…leaving the tour and going to that was a bit disappointing… very disappointing”

Logan certainly picked up on the barely concealed bitterness and put it to Brailsford in the studio. He's young “he'll get over it” was the response. And possibly he will. A slew of stage victories in the Giro and Tour, and maybe the green jersey might well help Cavendish move on. But to this observer at least Brailsford's remark was a rare ill judged comment. Cavendish came across as a young man determined to keep himself motivated and hungry – and probably well aware that a well nurtured sense of grievance is a classic motivational tool. “He'll get over it” could well be fuel for the fire.

As an example of how important it is for Cavendish to keep the inner fires stoked and ready he told Logant that after Milan San Remo he didn't buy the flash car he'd promised himself for winning, because he reckoned there was an outside chance that it might be the start of success going to his head.

Hints were dropped in the pre-publicity for the interview that Cavendish might well announce that he would never ride in the track team again, he didn't and Brailsford was quick to announce that Cavendish was central to his plans for the Olympic road race in 2012 on a London course set up for the sprinters, however the exact nature of his, and British Cyclings relationship with the young Manx man was as unclear at the end of last night's programme as at the beginning and from that we can conclude that everything in the garden is not yet rosy between them – if it was he would surely have said so.

Indeed if you really wanted to try reading between the lines, Brailsford's admission that there was a debate in cycling as to where the Olympics sat in relation to the big road races (he didn't add that it was a fairly one-sided debate) and that professional road cycling could be seen as a level up from the Olympics might leave open the possibility that the 2012 road race is not one of Cavendish's higher priorities. Let's hope it is and that Brailsford can use all his powers of persuasion and motivation to get him to the start line in 2012 in tip top condition.

Elsewhere Cavendish hit out at the media's coverage of cycling's fight against doping.

"If you put the time and effort into catching the cheats you're going to catch them, and that's what cycling does,"

"I did tests 64 times last year - 64 times! Tell me anybody in other sports gets that. I have to pay 20% of all my prize money to anti-doping.

"Cycling, the governing body of cycling, the race organisers, they care more about a clean and fair sport than the image of the sport.

"This is what angers me about the press. My sport is doing everything it can and it's getting a bad name for it."

1
Tom Dumoulin to take a break from racing
2
Near Miss of the Day 527: Land Rover driver passes between cyclist and fuel tanker
3
Brexit and the bike industry: how the situation is evolving
4
Cyclist “seriously concussed” avoiding vehicle on Kensington High Street – where council recently tore out protected cycle lane
5
Brighton woman riding with her child on her bike sent face-first into wall by another cyclist
6
Decathlon to stock new Santini UCI World Champs collection
7
Nail traps laid down against Cheshire cyclists
8
Near Miss of the Day 526: Flatbed truck driver clips cyclist while attempting mindless overtake