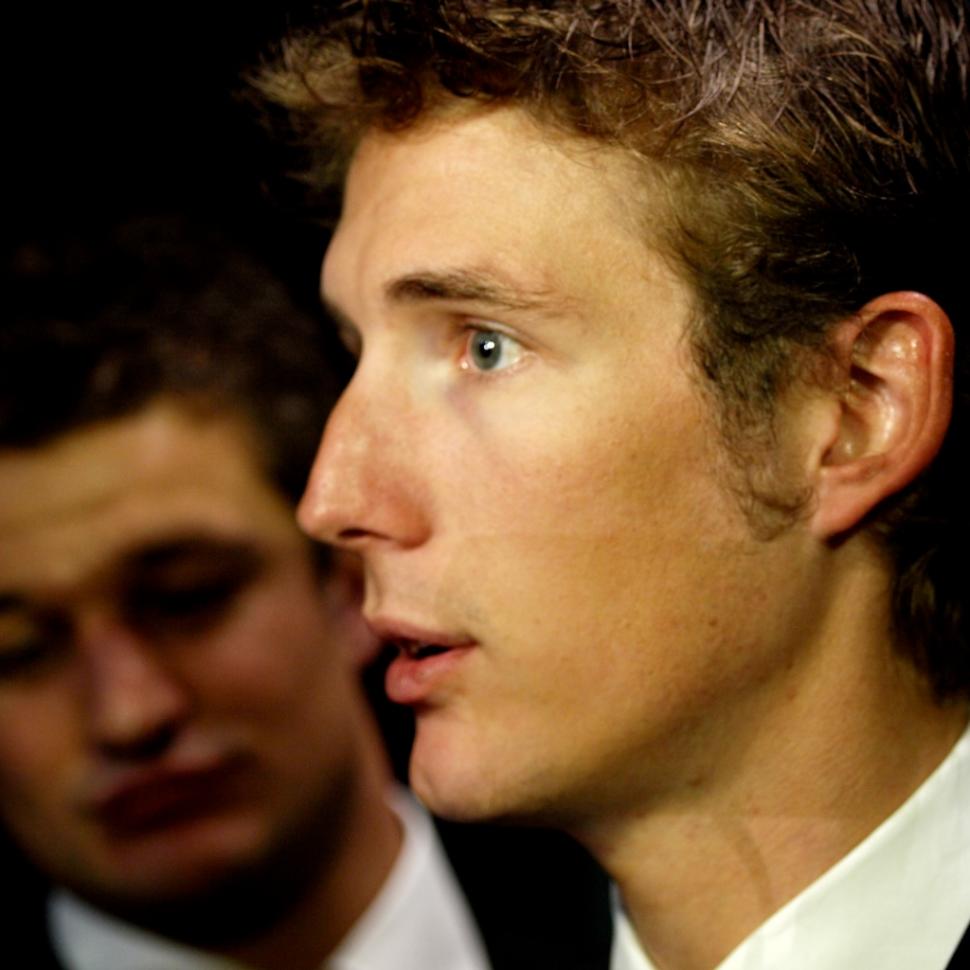 Voeckler says "I fought with all my strength," Schleck says he's ready to wear yellow

Reaction following a dramatic day's racing in the Alps, including Geraint Thomas's explanation of Uran's woes...
by Simon_MacMichael

Thomas Voeckler has confessed that holding on to the Tour de France yellow jersey today by just 15 seconds was “a triumph that I fought for with all my strength,” but admits that his lead is a slender one with the last of three big days in the Alps looming tomorrow followed by Saturday’s individual time trial in Grenoble. Andy Schleck, winner of today’s dramatic stage, insists he is ready to take over the maillot jaune.

Europcar rider Voeckler takes to the start line tomorrow in Modane wearing the maillot jaune for the tenth consecutive stage, the same spell he spent in the race lead back in 2004, when he ceded it to eventual winner Lance Armstrong. The whole of France, and many cycling fans around the world, will be hoping he will keep it for three more days this time round.

At the foot of today’s final climb to the Galibier, it looked as though the stage win and overall lead were heading the way of Leopard Trek’s Schleck, who had launched a stunning attack on the second of the day’s big ascents, the Izoard, with his rivals unable – or unwilling – to respond.

The 26-year-old, runner-up to Alberto Contador for the past two years, won the stage, but having started the ascent with a 4 minutes 30 lead over the maillot jaune group, enough to put him comfortably at the top of the overall standings, he finished it 15 seconds shy of the time that would have put him into yellow.

Partly, that was due to Schleck starting to fade inside the final couple of kilometres as the toil of his break and that final ascent, most of which he rode on his own, took their toll. Voeckler’s response was also crucial, though, the Frenchman digging deep into his reserves to keep hold of the jersey.

“I came across the line and I knew that Andy Schleck could have taken the yellow jersey but I’ve kept it by just 15 seconds,” Voecler said afterwards.

“It was a certainty that Andy would attack. He had two riders in the escape, and they were used for support when the action started in our group.

After Schleck had made his move, benefiting from the assistance of one of those team mates involved in that earlier breakaway, Maxine Monfort, to bridge across to the a small group at the head of the race, Cadel Evans belatedly took up duties at the front of the chasing bunch.

Second overall this morning but now lying fourth, the Australian is the best time trial rider of the quartet from whom the overall winner will most likely emerge, and seemed frustrated by the apparent refusal of others to try and reduce Schleck’s lead.

“I took advantage of the efforts of Cadel Evans who has worked very hard to try and bring back the break,” admitted Voeckler, adding, “That’s racing.”

One of those who is unlikely to be contesting the overall win is defending champion and three time winner Alberto Contador, dropped around 2 kilometres from the summit of the Galibier and now lying nearly 5 minutes behind Voeckler.

“I hadn’t noticed that Contador had been dropped,” revealed Voeckler. “I was especially afraid that he would put in a big attack in the last two or three kilometres.

“In the end I had no earphone, and I asked Fränk Schleck how much time his brother had in advance, but he said he did not know.

“Then I saw that it was just under three minutes, so I said to [Europcar team mate] Pierre Rolland that we had to ride, and it worked, it’s like a miracle.

“For the rest of this Tour de France it does not depend on me,” concluded Voeckler. “Fifteen seconds is a small margin when compared to the best climbers in the world.”

That may be so, and while there are stronger favourites to take the overall title in Paris on Sunday, in the past two decades, the overall lead in the Tour de France has only once changed hands this late in the race.

That happened five years ago tomorrow when Floyd Landis rode back into the maillot jaune after winning the penultimate day’s time trial, although of course he would later be stripped of his title after he was revealed to have failed a drugs test two days earlier.

The last time a French rider was in yellow this late in the race was in 1989, when the late Laurent Fignon lost the title by just 8 seconds, the narrowest margin ever, to American rider Greg Lemond following the final day’s individual time trial in Paris, replacing what has become the traditional day for the sprinters to celebrate the bicentenary of the French Revolution.

This year’s individual time trial stage the day after tomorrow is likely to prove just as decisive as that one 22 years ago, although this evening, Schleck was focusing on his performance today rather than looking ahead on Saturday.

“We had a very precise plan today,” explained the Leopard Trek rider. “In the morning briefing we said we would send two riders in the breakaway. We wanted one good rouleur and one good climber in the break. On the Col d’Izoard, I would attack. In cycling you make a lot of plans, but a lot of times there are factors in play that you cannot control. Today, the plan worked out perfectly.”

Those two riders who got into the break were the Dutch rider Joost Posthuma, who worked hard to ensure it got clear, plus the Belgian, Montfort, who played a vital role in leading Schleck safely down the descent of the Izoard and safely onto the lower slopes of the Galibier.

“Without Maxime and Joost, without this whole team, the victory today could not have been possible,” Schleck acknowledged. “Thanks to them I took the stage win. Maxime allowed me to resist the hardest parts leading up to the Galibier and shielded me from the headwinds. He brought me to 17 kilometers from the finish.

“This is by far the most beautiful win of my career,” continued Schleck. “The team has done incredible work so far in the Tour, and I dedicate the victory to them.”

One jersey that did change hands today was the best young rider’s white jersey after a difficult stage for Team Sky’s Rigoberto Uran, who has lost top spot to Cofidis rider Reim Taaramae. The Colombian has also been leapfrogged by Voecjler’s lieutenant, Rolland.
“Rigoberto was struggling from the off with a chest infection today, he went off the back on the second climb but we managed to get him back on, and then he crashed halfway down the descent of it,” revealed his team mate Geraint Thomas afterwards.

"We were all protecting him though leading onto the Galibier and then myself and Xabi (Zandio) paced him up that final climb. I had to wait for him a few times but it was a matter of trying to get him to the top as quickly as possible and limiting the damage from his rivals for the white jersey.

"On the bus on the way home he was tired and gutted but he has to remember he’s still in a great position – 15th on GC – and he’s only three minutes off the white jersey so it’s all still to play for. If he gets a good feed and sleep tonight hopefully he’ll be OK again tomorrow and anything can happen."
Those last three words could almost serve as the motto of the 2011 Tour de France. A gripping three days lie ahead.