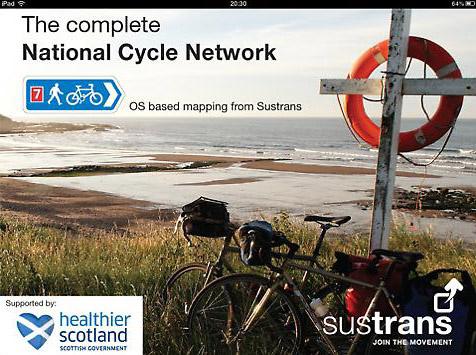 Sustrans, the sustainable transport charity, has revealed that more women are using the National Cycle Network (NCN), with a 13% increase in female users during 2010 meaning they now account for four in ten users. There has also been a rise in commuting traffic, which now makes up a quarter of journeys made by adults. The news coincides with the sustainable transport charity launching its new iPhone app today.

Releasing its annual usage statistics – the full Annual Review will be published next month – Sustrans said that the NCN, which it manages and maintains, saw 420 million journeys last year, almost equally split between foot and cycling, at respectively 48.6% and 51.4%. In all 3 million people used the NCN during the year, with two thirds of those saying that it had helped them become more physically active.

Commuting trips by adults rose by 10% year on year, which Sustrans said highlighted the NCN’s role as an everyday transport option, and it estimated that more than £46 million had been saved in fuel costs had those same trips been made by car. Taking all trips into account, the potential carbon dioxide reduction was 657,000 tonnes during 2010. The estimated health benefit is £400,000,000.

In a survey of users, 84% said that they felt safe while using the NCN, with 66% stating that it saved them money. Leisure trips accounted for 45% of all journeys and school run travel for 6%. Some 7% of journeys were by people new or returning to cycling, while there was a significant difference in the profile of users by age – 9% of trips were made by those aged 16 to 24, but 27% by people aged 55 plus.

Malcolm Shepherd, Sustrans’ Chief Executive, commented: “It is very encouraging to see more women using the Network and clearly with petrol prices at new highs, it is being chosen as a valid alternative way to make those everyday journeys like commuting to work or doing the school run. “

He continued: “Investing in walking and cycling may not be as exciting or headline-grabbing as building electric cars or stretching cable cars across the Thames, but unlocking their potential, as an obvious choice for more people every day, is the future of local transport and a more active population.

“It is vital that government, through the Local Sustainable Transport Fund, invests in high quality walking and cycling routes, cycle training and projects that encourage and help people to leave their car at home, especially for those local journeys that make up 67% of all trips.”

Meanwhile, Sustrans today launched its new iPhone app, available as a free download from Apple’s iTunes store, which it says features 25,000 miles of cycling and walking network throughout the UK, ideal for “picking your way through an urban metropolis, winding through the countryside, finding a traffic-free route to school, a challenging bike ride or a leisurely family day out.”

The app also has details of local schools, supermarkets, car clubs, bus stops and car clubs, among others. We’ve asked whether there is an Android version in the pipeline, and we’ll let you know Sustrans’ response as soon as we are able to.

Started in 1995, the NCN now covers 13,000 miles throughout the UK and is continuing to expand and be enhanced through initiatives such as the Connect2 project, and Sustrans claims that 58% of the population live within a mile of it.

The network relies on volunteers to keep it maintained, and Sustrans has issued a call for more people to get involved, citing that more than one in three people currently giving up their time for it have noticed an improvement in their health and wellbeing.

The call to action coincides with National Volunteer Week, and Sustrans adds that two in five of those volunteering say that they cycle more, while one fifth have begun walking more for their everyday journeys than they did before volunteering.

One volunteer, 67-year-old William Justice from Washington, Tyne and Wear, says that working with Sustrans has helped him shed three stone over the past two years. His duties include looking after part of the C2C route, which he cycles along to check signage, prune back overgrowing vegetation, and pick up litter.

“I got involved as a volunteer when I retired two years ago and it’s had an enormous impact on me’ he explains. “I’ve lost weight and am much fitter now, but being part of a team and sharing each other’s enthusiasm for walking and cycling has also improved my mental wellbeing and outlook on life. I couldn’t recommend it more strongly to anyone thinking about giving volunteering a go.”

According to Sustrans, reasons for wishing to volunteer include not just an interest in cycling and the environment, but also wanting to help make a difference to the quality of live for the local community.

Tony Ambrose, Sustrans' Volunteer Manager, said: “Many of our volunteers give their time to help maintain and promote the National Cycle Network, so it gets them outdoors and active in a sociable way.

“The Network is now 13,000 miles across the UK and growing. There is no way we could develop and look after such a vast amount of routes without the people who donate their time. National Volunteers’ Week is a great time to thank our existing volunteers, who do a wonderful job, whilst urging more people to come forward and help.”

Further details of how you can help, including details of any opportunities close to where you live, can be found on the Support Sustrans section of the charity’s website, by telephoning 0117 915 0110, or by email.